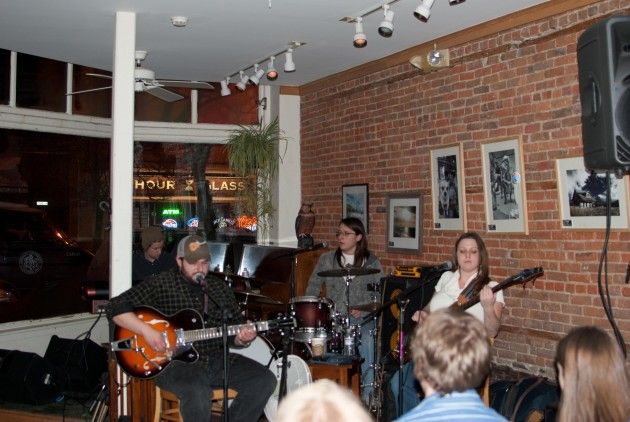 The Barge Canal Coffee Company was packed on Saturday, Janu­ary 29 when it welcomed back the Same Blood Folk band as part of their “Keeping Live Music Alive in Hamilton” initiative. The size­able crowd of students, community members and band groupies forced many last-minute strag­glers to stand. In fact, it was dif­ficult to see the stage behind the sea of beanie-clad heads.

The success of the show was obvious even an hour before it began, when the band meticu­lously went through lighting and sound adjustments. They wanted to put on a great show, and they certainly succeeded.

The act opened with a formal introduction by front man Zach­ary Collins and an update on their latest CD. Collins assured the audience that it is about 70 percent complete, and the band proceeded to play most of the songs off of it. According to their website, it is to be released on September 18 at the Earlville Opera House.

The Same Blood Folk origi­nated in Hamilton and have since spread throughout Up­state New York. The band con­sists of four members: Zachary Collins on vocals, guitar, banjo and mandolin; Jenny Collins on bass guitar and vocals; Brendan O’Connor on percussion and vocals; and Colin Nevison on key­board, harmonica, accordion and washboard. Same Blood Folk’s sound is a unique mix of soul and rock which they identify as Americana. The composition of the band is somewhat reminis­cent of The Hush Sound with much more grit and edge. Their emphasis on songs both with strong male and female parts sets them apart from the typical four-part band, likely adding to their appeal. They get much of their inspiration from acts like Cold War Kids, Bob Dylan, Gillian Welch and The Black Keys.

Saturday’s show was not their first at the Barge, but it was their first time back in Ham­ilton since performing at the Earlville Opera House last year. Since that show, they have re­vamped – to the point of rewriting – some of the songs appearing on their upcoming album, and fans were eager to hear the new arrangements. Although they failed to mention the names of most of their songs, in­cluded in the set were “Dead Man’s Blues” and “Leaves in the Fall.”

Although the show was largely successful, the band lost about a third of their audience during a 10 minute intermission between their two sets. Despite fewer numbers, the Barge was just as live­ly during the second half.