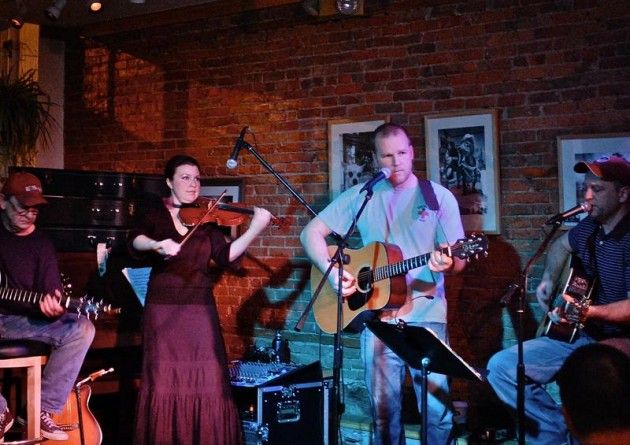 This past Saturday, the band Williams Road appeared at The Barge Canal for a fan­tastic performance. They played contempo­rary American folk, outlaw, alternative coun­try and Irish roots. I must admit I was a little hesitant at first because folk music is not my favorite genre, but I was quite surprised.

Williams Road, formed in 2009, con­sists of lead vocals and guitar players Scott Krueger and Mike Craven, violinist Clare Pellerin and backup vocals and guitar player Brad Jewett. The four created an outstanding atmosphere for the listeners. All of the band members are middle-aged, and this was reflected in the audience. While there were some Colgate students present, the majority of people at the Barge were Hamiltonians and professors with their children. The weather outside might have been a contributor to keeping people away from downtown.

The band members had a great connec­tion with each other, making eye contact at appropriate times and knowing when the key changes, and solos came in perfectly. The country music they played was beautiful and very mellow. It reminded me of James Tay­lor with Irish roots. Many of their songs were more solemn and relaxed, although they did play upbeat country as well, consisting of toe-tappers and violin solos.

They also played a more traditional Irish song, something that I was not familiar with. It was very interesting and quite enjoyable. The music that Williams Road played was a great way to unwind after a stressful week of work. The emotion that the group put into each song reverberated throughout the Barge and was felt by everyone who attended. I was extremely hap­py that I had witnessed such a unique blend of cultures, and hopefully more Colgate students will venture down to the Barge in the future to further their musical education. Williams Road is in the process of recording a CD that they hope to have out this spring.