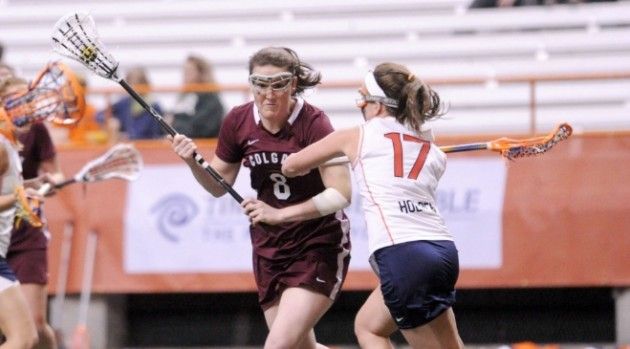 This past Thursday evening, the Colgate Women’s lacrosse team fell to fifth-ranked Syracuse, 19-14, at the Carrier Dome.

Syracuse (1-0) shot out to quick 3-0 lead over Colgate, with goals from three different attack-men on three consecutive possessions. Junior midfielder Courtney Miller answered back with her third goal of the season on a free position shot. The Or­ange struck again less than a minute later when Lindsey Connell scored her second goal of the game.

First-year Raider Monica White scored her first collegiate goal of the season with 17:33 left in the half, narrowing the gap in the score to 4-2. Senior midfielder Col­leen Bubnack assisted White’s goal as she drove inside the eight-meter arc to draw in the defense and passed the ball off to White who was stationed at the far post of the goal.

Just 33 seconds later, the Raiders re­gained possession of the ball after an illegal stick check. Bubnack was able to get back in the arc to score her first goal of night, assisted by Miller.

Syracuse struck back with two straight goals in a mere 36 seconds of play to bump the Orange’s up by to three goals to at 6-3. Raider senior Kate Bergstrom answered with an unassisted goal with 9:34 left in the first half to bring the score to 6-4. Syracuse received another free position shot on the 8-meter arc after an illegal call was made on Colgate’s defense. The Orange were able to finish on this free position. Once again, Bubnack took control on the offensive end, dodging two defenders to find the back of the net with her second goal of the game.

In the final eight minutes of play in the first half, the Orange outscored the Raid­ers 4-1. Sophomore midfielder, Amanda O’Sullivan had the lone goal for Colgate, coming up successful on a free position shot.

Syracuse came out to an intimidat­ing start in the second half, posting four straight goals in the first six minutes of play to increase their lead to 15-6. Miller reju­venated Raider spirits with a free position shot that landed in the back of the net with 23 minutes left of play. Bubnack made two straight goals for the Raiders to soften the Orange’s lead to 15-8. Her first goal was a free position, followed by an assisted goal from Greer Goebels. Goebels was the first player in the second half to score without a free position shot.

In the span of the next four minutes, Syracuse had three straight goals. The Raiders, however, did not lose momentum, and answered back with the final four goals of the game. Two of the goals came from Bergstrom, followed by two goals from first-year Alison Flood. The final score of the game was 19-14.

Other notable accomplishments of the game go to Colgate’s defensive end which had 14 turnovers on the game. Also, junior goalie Christina Roa did all she could in goal with 12 saves on the night.

Bergstrom was the key player of the night, tying her career best of five points, with four goals and one assist.

“They are obviously an intimidating op­ponent.” Bergstrom said. “SU is a power­house and always has been. We haven’t had the best of luck against the Orange in my four years here, but we had a really good week of practice and were coming off a win against Stony Brook. Our new assis­tant coach, Melissa Pearsall who used to play for SU, gave us a great scouting report and so we were able to prepare ourselves for the way they were going to attack. We knew that they had a couple very quick and skilled attackers, but overall a young team with not much experience. We had a couple of our defenders face guarding their top scorers. As for attack, we knew that we needed to be smart and take time for each of our possessions and only taking smart shots. We executed really well on both sides of the field.”

Despite the final score, Bergstrom left the field feeling proud of her team’s ef­forts. “We were ready. In years past we have walked into the Carrier Dome feel­ing scared and hopeless, and we were al­ready defeated. This year was different. The coaches had us pumped up and made us feel that we really could compete and take down SU. Even though the scoreboard was a loss, this was a huge win for the Colgate Lacrosse program, scoring double dig­its against such a competitive opponent, which is something we hadn’t been able to do in 12 years. Most importantly, as a team we now know that there is nobody on our schedule that we can’t beat. We can play with the best.”

“We went into this game believing that we could win, and I think that really is what helped us to be so successful,” team­mate Goebels added. “We have a lot of depth and talent on the team this year, our defense is working well as a unit and every player on attack is a contributor.”

Next Sunday, the Raiders will face Vermont at 1 p.m. on Tyler’s field.