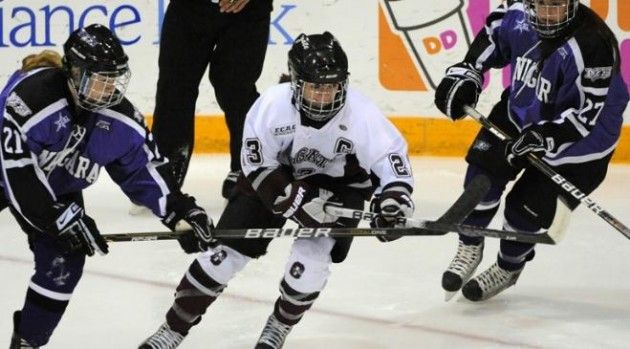 The Colgate women’s ice hockey team had its first tie of the season against Syra­cuse, 4-4, on Tuesday, January 4. Later that week on Friday, January 7, the Raid­ers had their second tied game with ECAC Hockey opponent Brown by a score of 2-2. The following afternoon Colgate dropped its fourth ECAC Hockey game of the sea­son, falling to Yale 3-1. On January 14 the Raiders captured their fourth ECAC Hockey win of the season on Friday night, shutting out Union 1-0. This past Saturday, despite making a series of comebacks, Col­gate was unable to secure the goal needed to go into overtime, leading the Raiders to suffer a 5-4 setback against Rensselaer.

On January 4, Colgate took on Syra­cuse. Sophomores Jenna Klynstra and Brittany Phillips recorded three points each for the Raiders. Klynstra had two goals and one assist while Phillips had three assists. First-year Rachel Walsh and classmate Jocelyn Simpson also scored one goal apiece.

Colgate started off the game with an of­fensive front, creating several scoring op­portunities early in the game. However, Colgate was unable to find a goal until later at the 16:02 mark with a score by Klynstra, giving the Raiders a 1-0 lead go­ing into the first intermission. The Orange came out strong in the second frame, scor­ing early in the second at the 2:35 leaving the game 1-1. Although both teams con­tinued to play aggressively, Syracuse scored again at the 11:46 to take the lead for the first time in the game.

After ten minutes of hard work in the final period, Simpson scored the second goal for Colgate to tie the score 2-2. Col­gate continued its offensive momentum to score two more goals at the 15:18 and 17:52 marks, taking a two-goal lead with just two minutes left. The first goal was scored by Walsh and Klynstra scored the second goal. Unfortunately, Syracuse was able to mount a comeback and score two late goals at the 18:29 and 19:18 marks to tie the game once more and send it into overtime. Both teams battled it out in the overtime period, but after five minutes of play they were forced to settle with a 4-4 tie.

The Raiders found their momentum late in the first period, which eventually led to a goal at the 17:51 mark during a power play. However, the tables turned in the second frame. The Bears outshot Col­gate 12-5 and were rewarded with a goal at the 8:49 mark and then again with only a minute remaining in the period, giving the Bears a 2-1 advantage.

Feeling the pressure of the one-goal def­icit going into the final 20 minutes of play, Colgate began to play with more intensity. With four minutes remaining in the third, the Raiders knotted the game at two with a goal by Phillips. Both teams continued to battle it out on the ice, and despite a few last-minute nail-biting attempts, the Raid­ers could not find a third goal, resulting in their fifth overtime game of the season.

Both teams were hungry for a league win. However, neither Brown nor ‘Gate could find the net during overtime, re­sulting in Colgate’s second and the Bears’ third tie of the season.

The next day on January 8, the Col­gate women’s hockey team fell to Yale 3-1. First-year Rachel Walsh scored the lone goal for the Raiders.

Colgate started the game with a lot of momentum and energy, attacking the Bull­dogs’ net aggressively in the first two min­utes of the game. The Raiders then found success at 2:04 when Walsh picked up a pass from junior Heidi Peterson, giving Colgate the 1-0 lead. Unfortunately, the lead was short-lived with Yale answering back in no time, tying the game at 1-1.

In the second period, both teams were unable to find a goal. However, in the third frame, despite Colgate outshooting Yale 15-9 in the second stanza, the Bull­dogs were able to find success twice at the 9:37 mark and then again at the 12:01 mark, putting the score at 3-1 going into the final period.

A scoreless third period resulted in Col­gate suffering its fourth conference setback of the season.

Last Friday, the Colgate women’s ice hockey team found its fourth ECAC Hock­ey win of the season when it shut out Union 1-0. Klynstra scored the game-winning goal for the Raiders.

Colgate started off strong in the first pe­riod, firing a series of shots at the Dutch­women’s net, ultimately landing the Raiders a goal at the 3:01 mark scored by Klynstra assisted by Phillips. With an early goal in its pocket, Colgate continued to attack and put pressure on Union throughout the period, outshooting it 15-4.

Colgate continued to create scoring opportunities; however, the Raiders were unable to find a second goal, ending the second period still holding the 1-0 lead.

During the third period, Union came out determined to tie the game, but was unable to get any shots past senior goalten­der Lisa Plenderleith. As the final 20 min­utes of play came to an end, neither team could find success, resulting in the Raiders’ fourth conference win of the season.

The first period started off with both teams playing aggressively and creating an equal number of scoring opportunities. Both teams were determined to get on the scoreboard, but neither team could find suc­cess. It wasn’t until the final minute when Colgate committed a penalty, that the Engi­neers were able to take advantage and score at the 19:34 mark, giving them the 1-0 lead.

During the second frame, both teams came out playing aggressively, with Rens­selaer finding success early off in the pe­riod at the 2:30 mark, putting the score at 2-0. With the pressure of a two-goal deficit, Colgate answered back less than five minutes later when Waters picked up a pass from Phillips and blasted it into the net, allowing the Raiders to stay in the game. Sophomore Jessica Hootz was credited with an assist. Still carrying its scoring momentum, the Engineers found the net once again at the 15:23 mark, but Colgate answered back quickly three min­utes later with a goal from Walsh to put the score at 3-2 at the end of the second period. Kirwan and Klynstra were credited with the assists.

With a 3-2 score going into the third frame, both teams picked up their intensity. Colgate started off the third with Klynstra netting an equalizer at the 3:56 mark with the help of Waters and Kirwan. With the game tied, both teams were hungry for a goal to take the lead. Rensselaer, determined to not let up its lead, scored two quick goals at the 9:12 and 10:14 marks to take the 5-3 lead. However, soon after, the Raiders found a goal from Phillips at the 13:01 mark with an assist from Waters and Peterson, leaving the score 5-4. Colgate fought hard, but despite its best efforts, the team could not find the back of the net, resulting in a 5-4 setback.

The Raiders will return to action this weekend against the defending ECAC Hockey champions and last year’s national runner-ups second-ranked Cornell Big Red. Colgate will travel to Ithaca, NY on Friday night for a 7 p.m. tilt, while the Big Red will come to Starr Rink on Saturday for an afternoon game at 4 p.m.