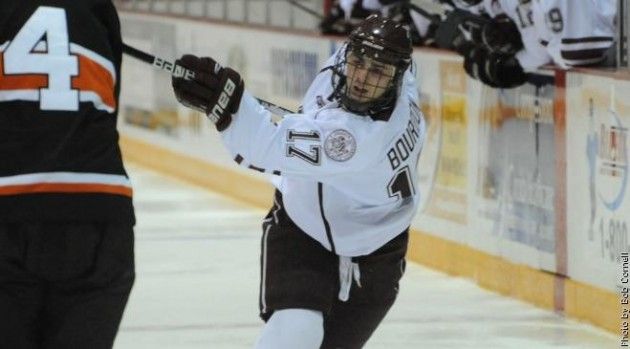 The 2010-2011 season has been one of heartbreak thusfar for the Colgate men’s hockey team. Despite putting themselves in a position to win almost every contest game they have played, the Raiders have struggled to finish off their opponents. Colgate played 10 games throughout December and the first half of January, winning one and dropping close decisions in the rest. Senior assistant captain François Brisebois and junior forward Austin Smith improved their level of play, with Brisebois putting up 10 points through the ten games and Smith adding eight to his season total.

“Despite the negative outcomes of the past few games, the team has been play­ing well and continued to work hard,” Brisebois said. “We know that none of our opponents pity us in any way and we still feel confident that we will peak when it’s important. I am certain that there’s not a single team in our league that would like to face us in the playoffs.”

On December 4, the Raiders traveled to West Point, NY to take on the Army Black Knights. Colgate defeated Army 3-0 to put a stop to an eight-game winless skid as junior goaltender Alex Evin pitched his second shutout of the campaign. Junior defenseman Corbin McPherson, junior forward Nick Prockow and Smith scored for the Raiders.

The following week, the Raiders trav­eled to Pittsburgh, PA to take on the Robert Morris Colonials in a two-game series on December 18 and 19. First-year goaltender Eric Mihalik got the nod in net twice in a row for the first time in his career and did not disappoint, giving Colgate a chance to win both games. The Raiders, however, were unable to come up with a victory, dropping the first game 3-2 in the extra session and the second one 3-1. Brisebois, Smith and senior captain Brian Day scored for Colgate. Mihalik’s performance earned him ECAC Hockey Goaltender of the Week honors.

On December 30, the Raiders competed in one of their best games of the season against the defending national champions, the Bos­ton College Eagles – ranked fourth at the time of the competition – in the semifinal of the Dartmouth holiday tournament. Col­gate led twice during the game, including a 3-1 advantage after the first period, but fell just short of a major upset. The final score was set at 6-5 with the well-seasoned Eagles skating away with the victory. First-year Jack McNamara recorded his first career goal, while Smith, Brisebois, sophomore forward Kurtis Bartliff and McPherson added the other tal­lies. The following afternoon the Raiders took on the Dartmouth Big Green in the consola­tion game. A Colgate team, plagued by illness, jumped out to a quick 2-0 lead before letting down its guard and allowing Dartmouth to score three unanswered goals to take the 3-2 lead. The Raiders fought back to force over­time, but were unable to either come away with the victory and instead dropped a 4-3 heartbreaker to their conference opponent.

On January 7, ‘Gate returned to ECAC Hockey play by paying a visit to the Quinni­piac Bobcats. It was a hard-fought game from the start, but Colgate was once again unable to figure out the Bobcats’ defense, losing 3-1 after Quinnipiac added an empty-net goal. Sophomore forward Robbie Bourdon scored the only goal for the Raiders.

Two days later, Colgate took on nine­teenth-ranked Princeton in front of a na­tional television audience. Despite drop­ping another close decision, the Raiders showed the country that they are a po­tential threat for future post-season op­ponents. After a slow start, Colgate over­came a 1-0 deficit to take a 2-1 lead in the first period and a 3-2 advantage halfway through the second period. The Tigers then scored three unanswered goals to take a 5-3 lead, before the Raiders cut the difference to one point to make the final score 5-4 in the hosts’ favor.

Last Friday, Colgate hosted the No. 13 Union Dutchmen. Union boasts the strongest power play in college hockey as well as one of the top goaltenders in the nation. The first period of the contest saw both teams test the waters and play hesitantly and the game was deadlocked in a scoreless tie after the first 20 min­utes with neither team able to create any offensive opportunities.

The second period saw both teams play more confidently, making for a better hockey game overall. The Dutchmen took the lead five minutes into the period, cash­ing in on the man advantage. The deficit seemed to spark something in Colgate, as the Raiders proceeded to control play throughout the rest of the period, but were unable to put anything past Union’s Keith Kincaid the media’s pick for All-ECAC Goaltender in the preseason, thus Colgate trailed 1-0 after two.

Both the Dutchmen and the Raiders came out firing from all cylinders in the third frame. Union increased its lead to 2-0 at 4:27, but Colgate answered back four minutes later when McNamara scored his second goal of the season. The Raiders would put pressure on Kincaid throughout the rest of the game but were unable to get anything past him and thus dropped a heartbreaking 2-1 decision.

The following evening Colgate attempt­ed to pick up the pieces against another formidable opponent in the ninth-ranked Rensselaer Engineers. The first period was similar to the previous evening’s as each team waited to see what its opponent’s game plan would be, but the Engineers carried the play with more force than the Raiders, and thus were able to put themselves in the scoreboard first at the 9:27 mark.

The second period saw Colgate take the initiative, which proved to be rewarding as Brisebois scored his seventh of the season, as­sisted by Bourdon and Day, who became the 49th Raider to reach 100 career points. The Raiders continued to put pressure on Rens­selaer’s Allen York, the ECAC Coaches’ pick for All-League Goaltender in the preseason.

The third frame saw Colgate continue to control the game, but failing each time it at­tempted to put the puck past York, while the Engineers found themselves equally frustrated when attempting to get anything else past Mihalik. The Raiders soon found themselves playing in their fifth overtime game of the year, which would also end up being their most gut-wrenching defeat of the campaign. Early in the extra session, RPI’s CJ Lee got called for checking from behind and game misconduct penalties, thus awarding Colgate a power play throughout the rest of the contest. The Raid­ers had several chances to win the game, but were unable to cash in on them. At the 3:25 mark, a bad bounce set up a breakaway for the Engineers’ All-American forward Chase Polacek. Just as he streaked towards Colgate’s net, a Raider player got called for a hooking penalty on him while attempting to end the breakaway in a valiant effort to give the Raid­ers a chance to stay in the game, playing in what they thought would be even-strength hockey the rest of the way. The officials instead awarded Polacek a penalty shot, which proved to be the game-winning goal.

Scoring goals is difficult in ECAC Hock­ey,” Brisebois said. “The league is filled with strong defensive teams which possess tremen­dous goaltenders. This past weekend we were too fancy when it came to shooting the puck and that is something we will have to correct if we wish to start winning games.”

This upcoming weekend Colgate will try to turn its luck around when the Raid­ers take on the Cornell Big Red in their an­nual showdown. Colgate will host Cornell on Friday before traveling to Ithaca, NY the following evening to repay the visit.

“The games against Cornell are always very exciting,” Brisebois said. “The rivalry brings a lot of energy to the games. I think we will have to stay patient and keep things simple in order to win. Outworking them will then allow us to be opportunistic and come out on top. I think this weekend we will show our school as well as the entire nation how good our team can be.”

Both contests are slated for a 7 p.m. start