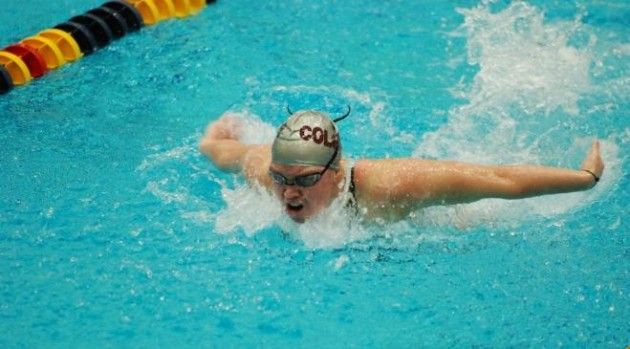 Perhaps the single most impressive per­formance came from Erin McGraw, who won five events for the day. She won three individual events beginning with the 50- yard fly as she had a mark of 26.69 sec­onds. She followed that with wins in the 100-yard fly and 100-yard individual medley. McGraw finished with a time of 58.23 second in the fly event, while it took her 1:00.01 to take first in the individual medley. She then teamed up with Lia Kun­napas, Emma Santoro and Caren Guyett in the 200-yard medley relay with a time of 1:49.11 to take first. She then closed out the relays with a first-place finish in the 200-yard free, along with Emily Kelly, Kunnapas and Guyett. The team ended up with a time of 1:39.47.

Guyette also found success in the pool, walking away with two individual victories. She won the first women’s event, which was the 200-yard freestyle with a time of 1:54.61. Her second win came in the distance event with a time of 5:03.29 in the 500-yard free­style. Kunnapas won the 100-yard breast­stroke at 59.18 seconds and Santoro took home a win in the 50-yard breaststroke with a mark of 32.17 seconds.

For the men, Dan Sweeney provided sup­port with three event wins. He started the day in the 50-yard butterfly and took first at 23.83 seconds, while also finishing first in the 100-yard freestyle with time of 48.38 seconds. His final sprint victory of the day came in the 100-yard butterfly. He finished with a mark of 55.62 seconds.

Teddy Perley also had an impressive day himself with two event wins. He took home the title in the 100-yard backstroke with a time of 1:01 and swam to a win in the 100-yard individual medley, finishing at 55.62 seconds.

Trevor Healy, Devon Healy, Henry Bott­ger and Patrick White were the four swim­mers that earned the win. In the other men’s relay, Dan Sweeney, Tucker Gniewek, Perley, and White swam to a victory in the 200-yard freestyle relay with a time of 1:29.93.

Later in the break, both teams faced Cornell in Ithaca. The women finished with a 169-120 victory over the Big Red. The men, on the other hand, fell 149-127. Casey Powers, Healy, Hadjipateras and Sweeny each contributed personal victories to the team total.

The women’s team was supported by three individual event victories from Guyett in the 200-yard freestyle, 200-yard butterfly, and 500-yard freestyle. Her final win put the Raiders up by 14 points and Colgate never gave up the lead.

Derlath also contributed a first-place finish in the 1000-yard freestyle relay with Hunter, Kunnapas, McGraw and Guyett in the pool.

Additionally, Kim Pilka dove to victory and swept both diving events with a score of 271.49 points in the 1-meter dive and 266.62 in the three-meter dive.

Colgate will be back in the pool on Janu­ary 22, taking on Binghamton and Vermont in the meet.