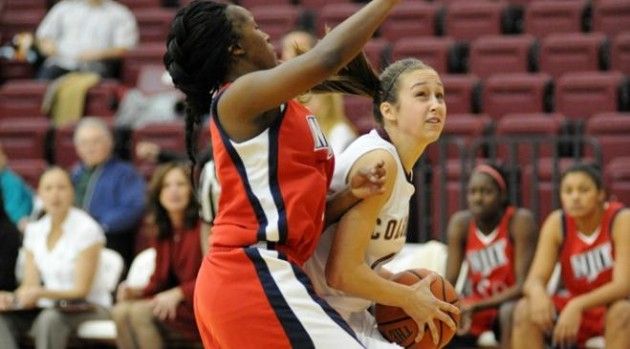 The Raiders are currently 6-13 overall with only Patriot League matches to come on their schedule.

The game against Army started slow­ly – the score was only 20-16 in favor of Army at half time.

In the second half, despite Colgate’s aggressive play, it remained unsuccessful offensively, scoring a total of 40 points and falling to the Black Nights. The of­fense was led by senior Krista Moser who racked up 12 points and four rebounds on the night. Sophomore Jhazmine Lynch and junior Kelly Korkowski each had five rebounds.

Against Lafayette, junior Tricia Oakes led the way with a 15-point performance. Korkowski put up a team-leading 11 re­bounds, a game high. Senior Krista Moser contributed 13 points and eight rebounds to the game. Despite losing its initial lead at 15:02, Colgate had a firm lead, 36-25, entering half time. The Leopards rallied early in the second half and found themselves down by only one point at the 14:41 mark. But the Raiders ultimately won the day, finishing with a strong de­fensive hold. Cumulatively, Colgate had a 31.6 field goal percentage and went 20-27 in free throws. The team bested Lafayette 40-39 in rebounds.

On Saturday, January 15, the Raiders traveled to Washington, D.C. to face the American University Eagles. After the Ea­gles took an early lead, Colgate responded with a 20-10 streak. By half time, how­ever, the team remained on the bottom of a 34-26 score. Senior Sami Kozlowski started the second half for Colgate with a three-pointer, reducing the deficit to five points. Despite this, American had pulled ahead 51-36 by 12:19. American would not relinquish its lead. At the game’s close, Kozlowski had a game-high 18 points and two steals. Lynch amassed 12 points and four steals while Oakes had a team-leading seven rebounds.

Colgate then traveled to Bethlehem, Pennsylvania where it recorded its third Patriot League loss. With a 15 point-game and five rebounds, senior Tayler Wejnert led the team offensively. Lynch put in another great performance with 11 points and three steals. Moser had a team-leading seven rebounds in the game – five on defense. Though Colgate put in an aggressive game offensively, Lehigh managed to keep momentum on its side, finishing the game with a strong offensive drive, maintaining its eighteen-point lead at the game’s close. In the end, Colgate had a 37.1 field goal percentage, shooting 37.5 percent from the line. The team was 5-11 from beyond the arch.

“The record, unfortunately, doesn’t reflect our strengths,” Head Coach Pam Bass said. “We are able to score extremely quickly in games using our transition. We have gotten much better over the last month with our half court defense and with our half court offense. Our defense creates our offense. We have moments that are awesome on defense. In each league game we have forced our opponent into a number of 30-second shot clock vi­olations. That is an extremely hard thing to accomplish. With that kind of defen­sive effort, we are putting ourselves into very competitive games.”

In Saturday’s home game against Buck­nell, Colgate lost a dramatic and emo­tional game after forcing the game into overtime on a three-pointer by Kozlows­ki. Colgate carried its early lead through the first half, capitalizing on an explosive start offensively.

The Bison tied the score at 38 at the 13:19 mark. They then pulled ahead at 11:32. With the game on the line, Ko­zlowski came through at the buzzer, tying the game at 59. Bucknell inaugu­rated overtime with a furious 9-0 run. Though Colgate rallied to bring the score to 76-66, they were unable to make up the difference.

“The best part of Patriot League play is that any team can beat any other team on any given night,” Coach Bass said. “I feel we are able to match up well with each team in the league. The difference in the W-L column at this stage has been our consistency and our finish. The hardest part of a game is finishing it. We need to be able to take control of all of the con­trollables for each possession of a game. When we achieve that, we will be seeing a major difference in our W-L record.”

The Colgate women’s basketball team will return to the court on Wednesday as it hosts Holy Cross. The Raiders will then travel to Annapolis, Maryland on Saturday to take on Navy.