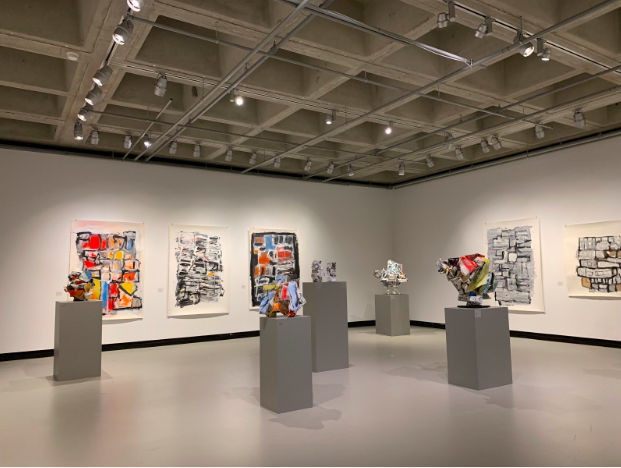 Chris Duncan unveiled his new exhibition entitled “Spolia” on Wednesday, October 23 as part of the Art and Art History lecture series. Duncan began his talk by asking if there were any Latin scholars in the audience since his latest pieces are inspired by the Latin word spolia. Spolia or “spoiled,” connotes the idea of “working and reworking imagery,” taking “things are that are no longer in their original format” and repurposing them in new ways.

Duncan arrived at the idea for the works when Professor of Art and Art History DeWitt Godfrey proposed for him to “do something specific for the space” instead of bringing in already worked on pieces. This intrigued Duncan, who admitted that, “that’s not normally how I work, so it got me thinking.”

To get inspiration for the project, Duncan looked back on his time in Italy. He described being fascinated by the “re-use of existing architectural fragments and materials in buildings,” and felt as though this was something he wanted to replicate in his own work.

Thus, Duncan’s journey to get to spolia involved many different phases of artistic discovery. Taking us through his creative evolution, he first brought the conversation to his major inspirations: Henri Laurens’ cubism, which he described to be “a language that is still remarkably vibrant” and “the formalist approaches to art” as demonstrated by the Stenberg brothers and Phyllida Barlow.

From there, Duncan discussed the different groups of pieces on which he worked, normally six to seven at a time, all using the same materials and format. Notably, he touched on his steel sculptures era in which he would manipulate scrap metal and other materials he retrieved from junkyards and piece them together. With these sculptures, which were often small and compact, Duncan confessed to feeling somewhat encumbered.

“It always seems like the small decisions are really important…[I began to] wonder how much control I really had over the material,” Duncan said.

It was from there that Duncan shifted his focus to drawing. Interested in “architectural form,” it was the 2D medium of paper that allowed for further experimentation with artistic concepts like grid-work and color.

However, sculpture was still incredibly important to Duncan and he remarked on its significance as a medium. “Sculpture can’t rely on text or what the artist says it is…it should stand on its own,” he said.

Thus, he found a new way to incorporate sculpture into his art: making sculptures out of his drawings. Instead of creating the grid-work and structure two-dimensionally on the page, it now became about manipulating the paper itself to create depth and dimension.

Chris Duncan’s spolia is not just a celebration of architecture and form, it is also a political commentary. Though he qualified this claim by stating, “I am not a political artist by any stretch,” Duncan’s heavy focus on architecture and on the metaphor of walls being taken down and built back up again, does not cease in its parallels to Trump’s rhetoric surrounding his proposed wall on the Mexican-American border.

“Walls are intended to exclude, to separate, to segregate,” Duncan said.

Duncan’s art should not elicit the same feelings, as he described his latest pieces to be some of his most “psychologically open.” However,his cognizance of these notions shows his breadth as an artist and ultimately, how deep these pieces extend outside of themselves.