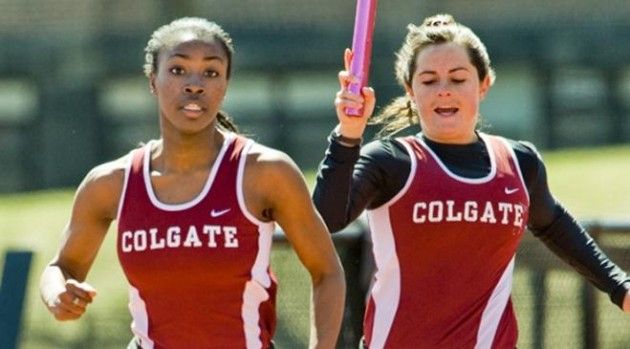 On Saturday, January 8, the Colgate Women’s Track and Field team traveled to nearby Cornell University to compete in the Cornell Southern Tier Open. Team scores were not recorded for the meet, as Col­gate competed in less than the full spread of events. But, there were several standout performances turned in by the Raiders.

In the final heat of the 60-meter dash, the Raiders grabbed two of the podium positions. Senior Emily Hepworth placed second in the event with a time of 8.33 seconds, while first-year teammate Jamie King-Prunty crossed the line in third place with a time of 8.49 seconds. In the pre­liminary heats, both Colgate runners were able to set personal records in the event. King-Prunty crossed the line in a swift 8.29 seconds, while Hepworth trailed just behind in third place with a final time of 8.3 seconds.

The Raiders also experienced measur­able success in the 400-meter dash, as se­nior Michelle Miller placed second with a final time of 1:01.69. Colgate was not quite as successful in the 500-meter dash in terms of finishing position, but still had two fantastic performances by juniors Alexandra Atkinson and Arielle Moylen. Atkinson placed third overall in the event, crossing the finish line in a brisk 1:21.97, and was followed closely in fourth place by Moylen, who completed the event in 1:23.24. Colgate grabbed another top-three finish in the 800-meter run when sophomore Ellen Callahan crossed the line in third place with a final time of 2:23.02.

The final individual event in which Colgate participated was the 200-meter dash. Miller and fellow senior Noelle Ed­monson placed fourth and fifth with times of 26.92 and 27.55, respectively. The two experienced Raiders were followed by new­comer King-Prunty, who finished the race in sixth place with a time of 29.84.

The Raiders absolutely dominated the relay portion of the meet, taking first and second place in the 4 x 400 relay. Col­gate’s ‘A’ squad (Atkinson, King-Prunty, Miller and Hepworth) placed first overall with a final time of 4:21.82. The group was followed closely by Colgate’s ‘B’ squad (Moylen, Callahan, Edmonson and junior Sarah Ellis), who completed the event in 4:32.63. The fastest of the final four groups in the event finished over 30 seconds behind Colgate’s teams.

The Raiders will return to action this Saturday, when they travel to Cam­bridge, Massachusetts to partake in the Harvard Invite.