Men’s Basketball Falls to Bucknell on the Road 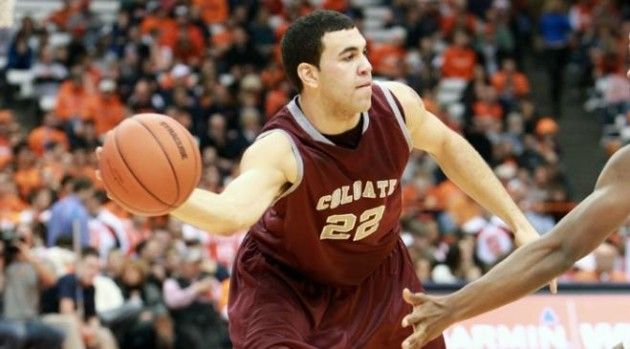 The men’s basketball team won its second straight game against Lehigh at home last week in a tight 80-79 game on Wednesday, but followed with a loss to Bucknell on the road 76-49 on Saturday.

On Saturday, Colgate traveled to Bucknell University, a Patriot League rival and suffered a crushing 76-49 loss that also ended the team’s two-game win streak. The Raiders were down 47 to 26 at the half to a very good Buck­nell team. Bucknell extended its win streak to eight games in the win against Colgate.

The Raiders could not shoot as well as their opponents, a fact proven by their 25% field goal percentage. Junior forward Yaw Gyawu scored 12 points and led Colgate with seven rebounds, while sophomore for­ward Brandon James contributed with 11 points off the bench for the Raiders. The team failed to come close against Bucknell in the second half as they ended the game with a commanding lead.

The Raiders are now 3-16 overall and 1-4 in the Patriot League Conference and realize that they must improve their play.

Hopefully this defeat against Bucknell is just a minor setback that will not demoralize the team enough to lose sight of their recent success against Dartmouth and Lehigh.

The team will mainly face Patriot League opponents for the remainder of the season, so they should be comfortable and in position to take control of their own destiny.

Colgate’s next contest will be tonight in Worcester, Mass. as they take on Holy Cross. On Saturday, the Raiders will return to Hamilton, N.Y. to host Navy. Tonight’s game will begin at 7 p.m. and Saturday’s will start at 2 p.m.