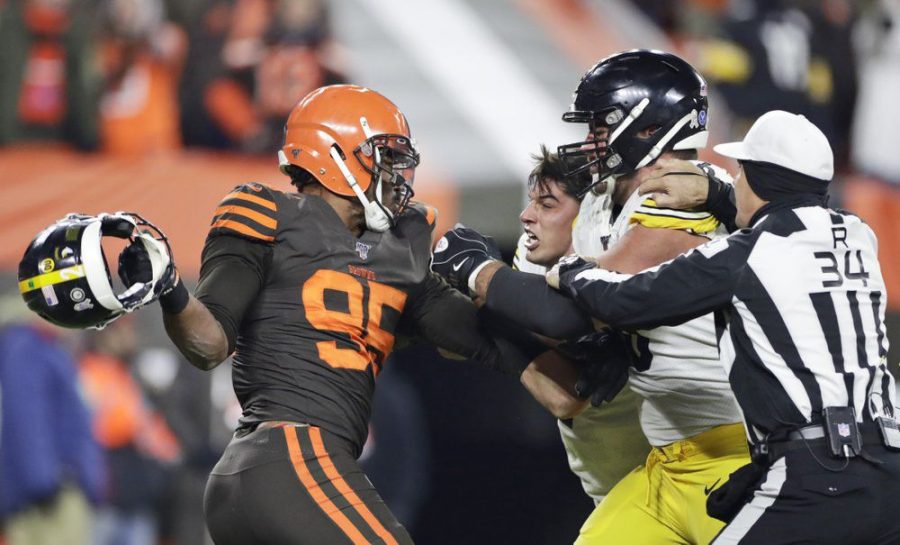 ​Watching football requires a suspension of disbelief much like watching a TV show or a movie. Rather than tricking yourself into believing what is happening is real, you have to trick yourself into ignoring the

brutal, inherent violence of the game.

You have to suspend thoughts about retired players who have committed suicide, with uncertain links to Chronic traumatic encephalopathy (CTE). You have to ignore how the violence of football sometimes spills over into the real world. You have to not think about how these players are human beings, and the hits they take on Sundays will follow them for the rest of the season, and often the rest of their lives.

​Last Thursday, November 14 the Cleveland Browns played a great game of football against the Pittsburgh Steelers. They got a big win against a division rival with a long history.

But with eight seconds left and a scoreboard reading 21-7 in favor of Cleveland, an underlying violence inherent in every game of football was exposed to a national television audience. Browns defensive end Myles Garrett put a late hit on Steelers quarterback Mason Rudolph after he had gotten rid of the ball.

What followed has been replayed on the major media outlets over the past week. The two scuffled on the ground, grabbing at each other’s helmets. Garrett grabbed Rudolph’s facemask and jerked his head forwards and back before successfully ripping his helmet off. As Rudolph’s offensive linemen came to his defense, Garrett swung Rudolph’s helmet at his head and connected with the soft underside of the helmet, not the hard crown.

Garrett was taken to the ground, Rudolph was knocked to the ground with a shove from another Browns defender and that was essentially the end of it. ​It was horrifying to witness.

If Rudolph had gotten hit with the hard exterior of the helmet, he could be sitting in a hospital with brain damage, or worse. Following the controversial play, Garrett was suspended indefinitely by the NFL. He will serve a minimum suspension through the end of this current season.

Rudolph has already been sidelined with one other concussion this year, coming on a vicious hit that knocked him out cold and put him in the hospital. ​This was an act of violence that has no place on a football field, or anywhere in society.

We have seen players get “carried away” in the past, but violence that is accepted on a football field can be just as damaging. Garrett’s actions are going to get a ton of negative attention, but it also brings the conversation about violence in football to the forefront. I’m not at all surprised that levels of participation in youth football are dropping.

Personally, ​I’ve been dealing with the after-effects of a concussion throughout this semester. I get headaches in class, and I cannot drink alcohol or play sports.

Watching football is different this year. When a defenseless receiver gets demolished on a helmet-to-helmet hit (like what happened to Steelers wideout Diontae Johnson in the very same game) I know what the receiver is going to go through in order to recover.

Football can still be really fun to watch. There’s a reason it’s the most popular American sport. But it’s important to remember that football has a very real impact of player’s health and will likely affect them for the rest of their lives​.