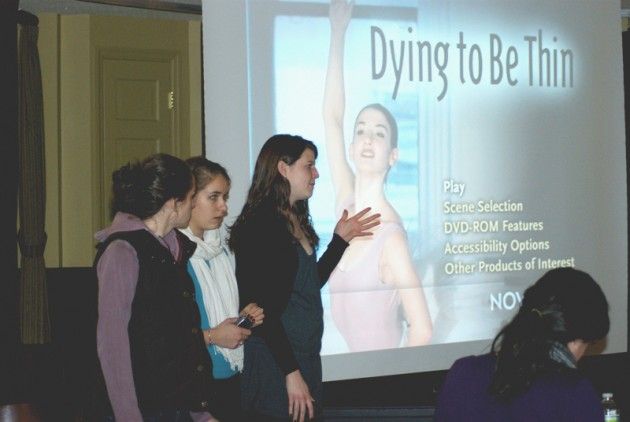 On Sunday, November 21, Col­gate students attended a screening of the documentary “Dying to be Thin” at Donovan’s Pub, presented by Active Minds. The documen­tary focuses on the greatest mental health challenge for youth: eating disorders. Anorexia nervosa is the deadliest of all psychiatric disorders, beating out both depression and schizophrenia. On a campus where fitness is regarded so highly, Colgate students have begun to question how prevalent this disease is among our own student body.

The documentary highlighted some very important, and very concerning, facts about the spread of eating disorders throughout the past half-century. Since the 1950s, eating disorders have been increasing by nearly 36 percent every five years. Although 15 to 24 year old women are at the greatest risk for an eating disorder, this is a disease that is escalating among men as well. By not eating properly, those with anorexia and bulimia do not get the nutrition they need to allow their body to work effectively. This is a slow sui­cide, as blood pressure drops, the kidneys and liver are damaged and ultimately the heart fails to pump.

After the documentary, the four founders of Colgate’s chap­ter of Active Minds: juniors Car­oline Komanecky, Suzanne Col­lier, Cassie Lawson and Lauren Richardson, discussed the impact of eating disorders on college students, particularly those here at Colgate.

“One in four college students has a diagnosable mental disorder,” Collier said.

Furthermore, about three out of every one hundred females will develop an eating disorder through­out their lifetime. Although most do not realize it, eating disorders are quite prevalent even here at Colgate. Nearly 46 percent of cli­ents at the Counseling Center this year have indicated that they are dissatisfied with their weight while about one in five identify an eat­ing disorder as the reason they seek counseling. Often times those with eating disorders neglect to realize that they have a problem, meaning the prevalence of this disease could, in actuality, be much greater than current accounts state.

In the 2006 edition of Men’s Magazine, Colgate was ranked the second fittest college campus in the entire nation. This leads many to believe that looking thin and be­ing fit is even more esteemed here at Colgate, meaning the pressure to look good is that much greater. Most of those who have been to the fitness center have noted that it is almost always packed. In fact, by January, Huntington Gym will be expanded to accommodate for this overflow of students looking to work­out. The question becomes, when does the need to look fit go from a healthy behavior to a dangerous addiction?

Colgate’s chapter of Active Minds, which formed on campus last spring, looks to raise aware­ness of these issues as well as other mental health disorders.

“Our mission is to educate our campus about mental health dis­orders in order to raise awareness and reduce the stigma surrounding them,” Komanecky said.

Active Minds is an organi­zation that originated nearly seven years ago at the University of Pennsylvania. Colgate’s four founders brought Active Minds here to Colgate because they be­lieve that a little discussion can go a long way in helping treat and prevent mental health disorders.

Active Minds educates students by letting students know that their problems are real and that they should seek help, as it can make all the difference. At Colgate, the Counseling Center provides a nec­essary starting point. Those with eating and other mental health disorders are often times unable to take on the battle themselves. But through the encouraging messages of groups like Active Minds, there is hope that old stigmas will be absolved and that those who need help will finally feel comfortable getting it.