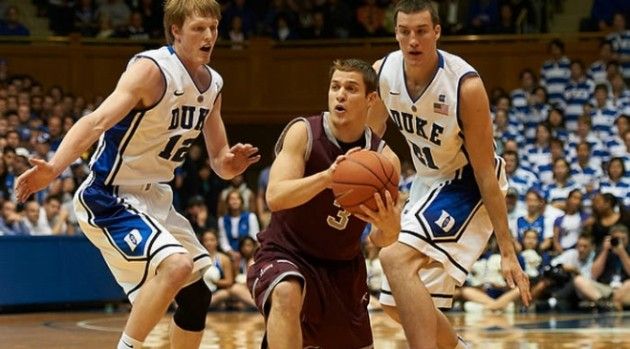 The Colgate men’s basketball team was de­feated by top-ranked Duke 110-58 on Novem­ber 19 in Durham, NC in a blowout game that gave the Raiders valuable experience against arguably the most talented team in the nation. The Raiders then traveled to New York City where the Columbia Lions defeated them 76-63 on November 23. The Raiders were only down one point at half time, but failed to deliver in the second half. In the second week of Thanksgiving break, the Raiders continued their two-game Ivy League trip to Hanover, New Hampshire, where they fell to Dartmouth 80-63.

Duke guards Nolan Smith, Kyrie Irving, An­dre Dawkins and Seth Curry combined for 56 points and 21 assists. The Raiders battled, but it was not enough to withstand the Blue Devils’ talented squad. Junior forward Yaw Gyawu led the Raiders with nine points and six rebounds and junior guard Mike Venezia contributed with eight points to the Raiders’ effort. Sophomore forward Brandon James also contributed with seven points and six boards. The Raiders were not outrebounded by much, but they turned the ball over 26 times compared to Duke’s 12 and only had 10 assists compared to Duke’s 24 assists.

In New York City, Colgate kept the game close with Columbia, but ultimately could not close out a win at Levien Gymnasium. The Raiders led 43-41 with 13:36 left in the second half, following a three-point play by junior forward Nick Pascale, but could not overcome the 26-10 Columbia Lions run that followed. Gyawu led the Raiders with 17 points, 8 rebounds and three steals, but it was to no avail as the Raiders’ record fell to 0-4 following their defeat. Sophomore guard Mitch Rolls contributed a season-high 14 points, while Pascale added 12 points and six boards.

The rebounding margin proved to be crucial. Columbia outrebounded Colgate 36 to 22. Of those 36 rebounds, 10 were offensive and con­tributed to many second-chance opportunities for the Lions. If the Raiders are going to progress and begin winning games, they have to cut the rebound margin.

Like most of the other competitions this sea­son, the Raiders kept play tight in the first half before falling apart in the second half. Moore hit a three-pointer to cut Dartmouth’s lead to 40-37 with 15:31 remaining, but Dartmouth would go on a run and the game would not be close again. The Raiders failed to shoot the ball well as they only shot 36% from the field.

“We lost our first two games against St. Fran­cis and Binghamton that were real close games,” Moore said. “We could have and probably should have won both. This kind of got our confidence down and now we aren’t playing as well as we did even in those losses,”

The Raiders realize that they have a lot of work to put in to become a better team. It starts with the intangibles. They have hung in with their opponents for the most part but they need to close out games. They have to play at a high level for the full 40 minutes.

“We are making it a purpose to become a team that no longer comes to win games but to take them,” first-year guard Chad Johnson said. “We have a good team and it’s a long season, but we just need the city of Hamilton and the fans of Colgate University to keep believing in us as we continue throughout the season.”

Defense lapses are something that the team is working on as a whole. The players realize that defense will propel the team and there’s no doubt that with practice and preparation, they’ll begin to close out the games they should win.

“We are working to bounce back from these losses as we focus this week’s practices on sustain­ing defensive intensity throughout the whole game, not just in spurts. Our defense, particu­larly in the second half of games, has hindered our ability to put teams away when we have a lead, or to fight back from a deficit,” junior guard Mike Venezia said.

This Saturday, Colgate will host the Univer­sity of New Hampshire. Next Tuesday, the Raid­ers will take on St. Francis (NY) before travel­ing to the Carrier Dome and facing the always tough Syracuse Orange. During winter break, Colgate will take on Maine, Albany, Stony Brook, Longwood, Maryland, Army, Lafayette and American.