Football Defeats Fordham in Last Game of the Season 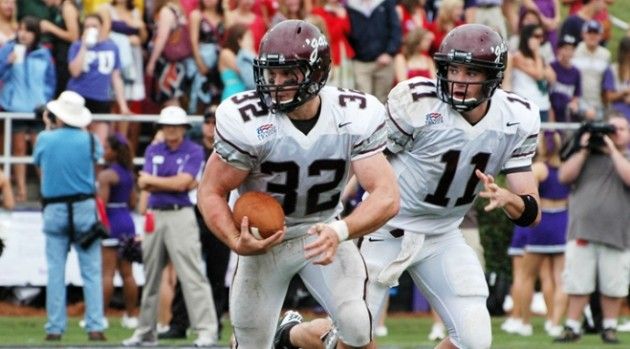 Even though Colgate’s season did not go en­tirely according to plan, the Raiders still needed a victory in their final game to secure a solid, sec­ond place finish. The team showed up and fin­ished the season in dominating fashion. Senior quarterback Greg Sullivan passed for three touch­downs and rushed for two more, and junior run­ning back Nate Eachus rushed for 204 yards and scored three times as Colgate decimated Fordham 47-12 two Saturdays ago in the Bronx, NY.

Sullivan and Eachus commandingly led the offense to 514 yards and almost 40 minutes of possession time. The quarterback was 15-of-17 through the air for 198 yards and ran for another 60 yards on 15 carries. Still, the running game be­longed almost exclusively to Eachus who crossed the 200–yard mark for the fourth time this season and pushed his season total to 1,871 yards.

Senior wide out Doug Rosnick finished with five catches for 90 yards and two touch­downs and first-year Daniel Cason grabbed a career-high of four receptions for 47 yards.

The defense was not too shabby either, sti­fling the Rams’ offense throughout the entire game. Sophomore linebacker Patrick Friel paced the team with nine tackles, while senior Chris DiMassa added six tackles and two sacks.

Colgate (3-2 PL,4 7-4) started off strong and never looked back, scoring on its first five posses­sions. On their first drive, the Raiders moved 75 yards in seven plays as Sullivan found Rosnick for a 17-yard score.

Fordham (3-2 PL, 5-6) could do nothing to respond and ‘Gate went right back on the attack, driving 85 yards in 6:39. The drive was capped by a one-yard Sullivan rush and highlighted by a 30-yard Eachus run that moved the ball from the Raiders’ 35-yard line to the Fordham 35.

Colgate kept firing to start the second quar­ter, moving 80 yards in just four plays to make it 20-0. Junior running back Noah Jackson broke through for a 31-yard rush on the drive and Sullivan found Eachus for the score from 23 yards out.

After another Fordham three-and-out, the Raiders found themselves with a short field and capitalized on it with another touchdown. After moving down to the Rams’ 24-yard line, Eachus took a handoff the rest of the way to make the score 27-0. The barrage was not over, however, as Colgate put together another impressive scoring drive, going 81 yards in 10 plays to push the lead to 34. Sullivan found Rosnick in the end zone for the second time to cap off the drive and lead ‘Gate into halftime.

“It is always fun scoring, but that being my last game made it special,” Rosnick said. “I think Sully made it a point to get everyone some touches, especially the seniors. It was a lot of fun and great to go out on a high note, both personally and as a team.”

The Rams opened the third quarter with the ball on their own 27-yard line but quarterback Ryan Higgins was picked off by first-year safety Chad Frey to give the Raiders amazing field po­sition. Ten plays later, Sullivan ran it in to put Colgate up by an astounding 40-0. Sophomore kicker Evan Goldszak missed the extra point to keep the lead at 40.

Fordham finally put together a decent drive on its ensuing possession, going 63 yards in 15 plays for the score. Higgins found receiver Ge­rard Rizzo from three yards out to put the Rams on the board and make it 40-6. Higgins’ attempt at a two-point conversion failed and the lead stayed at 34.

The Raiders’ next possession was a good one but it stalled at the Fordham 13 after the Rams stopped a fourth-and-three attempt by Sullivan. A few drives later, however, Colgate put its final points on the board when Eachus ran it in from six yards out.

The Rams scored on their next drive for the last time on a 14-yard Darryl Whiting rush that made the score 47-12. The two-point at­tempt failed once again and the 35-point margin became the final.

“Of course winning the league and making a run in the playoffs is what we hoped for, but we came up short on those goals,” Rosnick said. “So we wanted to win out our last three games for ourselves, just go out and have fun, and that’s what we did. We had to win the last three to have 32 wins as a senior class over the past four years, which is pretty remarkable. Knowing that this was most likely the last football we were ever go­ing to play, we wanted to have a positive taste in our mouths about not only our season, but our careers here at Colgate.”

The seniors played impressively in their final game for the Raiders and gave the younger play­ers a good foundation for a successful season next year. The Raiders will lose some key components on offense, notably Sullivan who went 25-5 as a starter and their leading receiver in Rosnick, but the return of Eachus and the core of a solid defense bodes well for the future.