Volleyball Ends Season in Second Place in the Patriot League 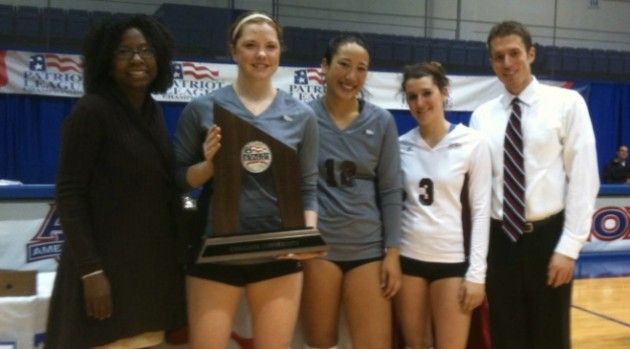 The Colgate volleyball team ended its season the the weekend just before Thanksgiving, winning the Patriot League semifinal 3-1 against Army, but falling to the undefeated American University in the championship match, in a 3-0 sweep. Ju­nior Maureen Colligan and senior captain Devon Applegate were named to the All-Tournament team for their performances over the weekend.

The win against Army upped the Colgate winning streak to seven, the most consecu­tive wins since 1996. The match did not seem so promising at the start, however, when the Army team – with an 11-3 PL re­cord – came out strong to post the first-set win with a nail biting 25-23 score. Colgate responded with a 10-6 lead in the second set to command respect from its opponent and set the tone for the rest of the match. Colgate continued to put pressure on the Army squad throughout the match, and never allowed less than a three-point gap between the two scores. A balanced and ac­countable offense and defense was the key to the match as Colgate posted points from kills and service aces while the back row prevented any points to be added to the op­ponent’s score. The Raiders closed out the match at a comfortable 25-20 with a Col­ligan kill and an attack error from Army to tie the set score at one.

Naturally, the Black Knights were not willing to give up without a fight, and the third set was characterized by an intense battle for points, where Colgate would gain its largest lead at 14-11. Determined to win, the Raiders pushed points and chipped away until the score was set at a close 25-22 in another victory for Colgate.

Colgate’s 2-1 lead put an enormous amount of pressure on the Army squad going into the fourth frame. Knowing that there is no room for mistakes can certainly set a team on edge, especially in such a fast and precise sport as volleyball. Of course, this worked to the Raiders’ advantage, and Colgate ran with its momentum to gain an early 8-4 lead off kills by senior captain Casey Ritt and first-year Lindsay Young. Clearly affected by the prospect of being booted from the playoffs, Army froze and allowed Colgate to secure a 16-9 lead over the Black Knights. Army posted 34 overall errors, while Colgate, out of the hot seat, posted only 19. The final set of the match was closed out at 25-19 as the Raiders ended the Black Knights’ season for the third time in the last four years.

“Both teams played extremely hard tonight,” Head Coach Ryan Baker said. “The difference-maker was our ability to respond when things got tough. We han­dled adversity throughout the match and our fans truly pulled out this win for us. We are in for another battle tomorrow and will need to have the same type of focus, energy and attitude.”

Unfortunately, a good attitude was not enough for Colgate to pull ahead of the ex­tremely solid American University Eagles, who were comfortable in their home gym for the championship match. The Raiders would not end the match without a fight, however, and as has been characteristic for the season they persevered despite the sizeable challenge that they faced.

The Eagles carried on their reputation as definite leaders of the Patriot League with an early 12-4 lead before Colgate woke up and made the score 15-9. Despite their spread offense, however, the Raid­ers were not able to defeat the American defense. The set ended with a 27-25 loss.

Colgate valiantly fought through the second set, leveling with the Eagles at 13. Unfortunately, the Raiders gave up two points on unforced errors that they could not afford to lose. American took advan­tage of its lead and never looked back. The set ended at 25-19 after a 10-6 run by the Eagles. Senior captain Logan Keala had four kills in the set, while Ritt and junior middle blocker Kaylee Dougherty collected two apiece.

In what would be the final fight for Colgate, the Raiders came out strong with a 4-1 lead atop American University. De­spite this early beacon of hope, the Eagles fired back with a 5-0 run and kept their momentum throughout the match. The Raiders never allowed more than a two-point advantage for the Eagles, but their efforts were not enough to stop Ameri­can from obtaining the win, and the set capped at 25-21 to secure a second place finish for Colgate in the last match of its 2010 season.

“Our seniors demonstrated what com­mitment to positive leadership does for a team,” Baker stated. “They led this young group to a place not many thought were possible. I will never be able to thank our seniors enough and I look forward to the development of what promises to be a very talented team in the future.”

The senior class of Ritt, Keala and Applegate finished its Colgate career with 65 career wins and earned over 15 wins in each of its four seasons. The three made the Patriot League Tournament all four years and the championship match in three of those occasions.