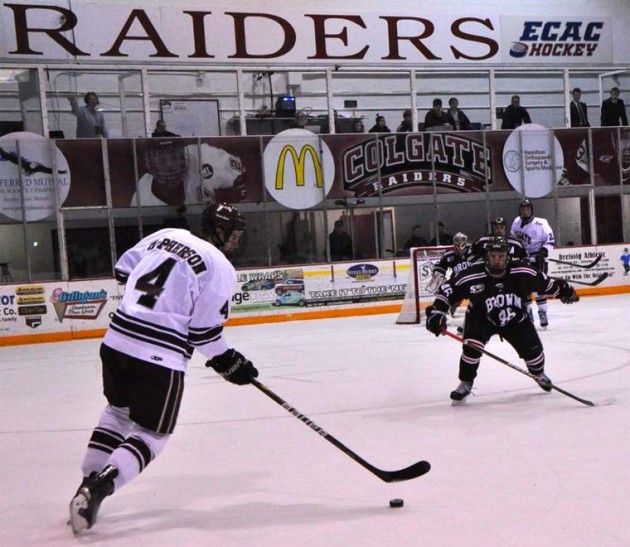 November was a tough month for the Colgate men’s hockey team, as they began with a 0-5-1 record in ECAC Hockey play, which was capped off by falling to Brown 5-2 and to No. 5 Yale 6-4. Three days later, the Raiders traveled to Niagara Falls, NY to take on the Purple Eagles from Niagara University. Despite outplaying its oppo­nent throughout the entirety of the contest, Colgate fell 4-2. Four days later, the Raiders attempted to pick up the pieces of a dismal month by taking on the Cornell Big Red at the Prudential Center in Newark, NJ, but once again failed as they were defeated 4-3 by the Ithacans.

The only positive to take from a month in which Colgate went 0-7-1 is the strong play put forth by first-year Chris Wagner, who scored three goals in the month, and sopho­more forward Robbie Bourdon, who is cur­rently on a six-game point streak and leads the team in points with five goals and six assists.

“I have not really changed much about my approach to the game,” Bourdon said. “Throughout the first few games, I stressed a lot because of the high expectations I had for myself. Recently, I’ve just had a better view towards hockey in general, as well as worked on preparing myself for a more physical role during the games.”

The first period of the game against Brown saw both teams cautiously studying each other while at the same time trying to find weaknesses in the opponent’s game plan. The Raiders were harmed by bouts of indisci­pline, providing the Bears–who boasted one of the top power plays in the country going into the game–with a two-man advantage. Brown scored at 9:32 and took a 1-0 after 20 minutes of play.

Colgate was able to answer back at the 8:32 mark of the second stanza, when junior forward Matt Firman scored his first goal of the season assisted by classmates defense­man Corbin McPherson and forward Austin Mayer. Twenty-one seconds after the tally, however, the Bears were awarded a power play which soon became a five-on-three situ­ation and once again cashed in to take a 2-1 lead going into the third. From then on, the Raiders lost any kind of control they could have held over the game.

Halfway through the third period, Brown scored a short-handed goal, and soon after added another one to take a commanding 4-1 lead with less than five minutes left on the clock. Not even Bourdon’s tally at 17:15 was enough to produce a comeback, as Brown took the victory, which was capped off with an empty-net goal.

The following evening, Colgate put forth its best effort of the month against its most formidable opponent thus far this season in Yale. The Raiders quickly took a 1-0 lead 59 seconds into the game, as senior captain Bri­an Day scored ‘Gate’s first power play goal in four games. It did not take long for the Bull­dogs to knot the game at one, doing so at the 6:33 mark on a man-advantage. Yale pro­ceeded to take a 3-1 lead in the next minute and a half with another power play goal and an even-strength tally. The Bulldogs outshot Colgate 21-8 throughout the period.

The Raiders were able to answer back ear­ly in the second, with two goals by Bourdon and junior forward Nick Prockow in the first four minutes to even the game at three goals each. A flurry of goals halfway through the frame saw Yale take a 6-3 lead going into the final 20 minutes of play.

A goal by first-year forward Mike Mc­Cann at 7:19 gave the Raiders hope for a comeback, but despite outshooting them 15-2 throughout the period, Colgate was unable to close the game.

“We really needed to stay out of the penalty box in both games,” Bourdon said. “Penalties swing momentum in favor of the other team. There is no doubt in my mind, even with our record as it stands, that neither Yale nor Brown will be looking forward to playing us the next time around.”

Three days later, the Raiders traveled to Lewiston, NY to take on the Niagara Purple Eagles. The first period saw both teams cre­ate good scoring chances, but both goalten­ders stood strong and kept their opponents scoreless through 20 minutes of play. In the second period, Colgate drew first blood when Bourdon scored halfway through the period on the power play. The Purple Eagles, however, were able to draw even with three minutes left in the stanza. In the third frame, Niagara scored early to take a 2-1 lead two minutes in, but the Raiders answered back halfway through, on the power play. Thirty-three seconds later, however, the Purple Ea­gles retook the lead and by adding an empty-net goal with 42 seconds left in the contest, secured a 4-2 victory over Colgate.

Last Saturday, the Raiders took on archri­val Cornell at the Prudential Center. The Big Red controlled the game early on and had the best scoring opportunities, but junior goaltender Alex Evin stopped every shot he faced in the first period. Halfway through the first, Colgate was able to find its groove and Day gave the team a 1-0 lead over Cornell heading into the second period.

In the second, the Raiders maintained the momentum and proceeded to outplay the Big Red throughout the stanza. Mayer gave the team a 2-0 lead at 9:52, but it was quick­ly cut back to one by Cornell. Two minutes later, however, Wagner scored his third of the season to give Colgate a 3-1 lead heading into the second intermission.

The third period saw the Raiders collapse once again. Mistakes on the Colgate defen­sive end allowed the Big Red to tie the game during the first six minutes and a power play goal at the 11:31 mark saw Cornell clinch its third straight victory over Colgate.

“Mental breakdowns happen from bad plays, unnecessary penalties and laziness,” Bourdon said. “In our last three games, we took leads and still lost because we beat ourselves. Cornell and Niagara were not necessarily better teams than us, but we just let them be for a period and they took advantage of it.”

This coming Saturday the Raiders will travel to West Point, NY to take on the Army Black Knights. A week later, they will host Niagara before traveling south to Pennsylva­nia to take on Robert Morris University. Lat­er this month, Colgate will play its final two non-conference games of the season, which include a tilt against defending national champion Boston College at the Dartmouth Tournament. In the first two weeks of Janu­ary, the Raiders will return to conference play before classes.