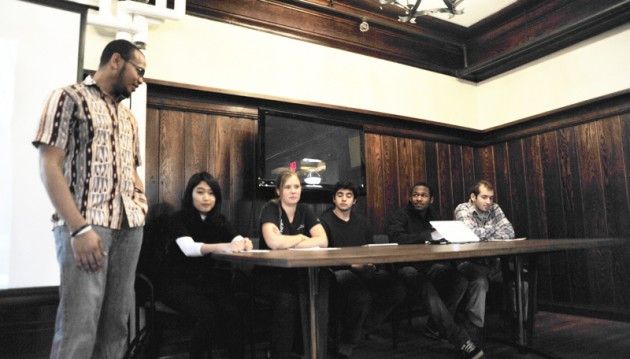 On Thursday, November 18, 110 Broad Street hosted an African, Lat­in, Asian, & Native American (AL­ANA) forum on international living, during which five students discussed their international lives before com­ing to Colgate and compared their experiences abroad to their life now.

Colgate has 175 international students from 36 countries.

“Colgate recruits these individuals to be a part of our community because they add incredible diversity to campus,” Bronzo said. “In order to have a holistic collegiate experience, exposure to peers who are unlike you is essential.”

Bronzo also stressed the importance of finding ways to relate to people that seem totally different from you.

Sophomore Dagan Rossini, who has spent time in 16 countries, also addressed this idea.

“I certainly had no idea who I really was until I saw the world,” Rossini said.

His time overseas greatly influenced his decision to become a Peace and Conflict Studies major.

First-year Stealla Yoh has lived in Korea, North Carolina and Tanzania, and spoke about her national identity, saying that she would most accurately describe herself as an “international citizen.”

Sophomore Charlie Meneghin studied abroad three times during high school – once in France and in Germany twice. Meneghin spoke about how Americans are often viewed with negativity overseas, saying that he has been bombarded with questions from Europeans about why Americans are so intolerant. He even mentioned that an 8-year-old French girl once asked him “why President Bush was such an idiot.”

“It really hurts when your country is viewed in such a negative light,” Meneghin said, “but through working with other people from other cultures, you can work to promote the good parts of the human experience.”

First-year Karl Jackson, who grew up in an predominantly African-American neighborhood of Chicago, has spent time in China and Japan, and spoke about the experience of feeling like an outsider in an environment where you are virtually the only person of your ethnicity.

“In Japan, if you are not Japanese, then you’re simply classified as ‘something else,” Jackson said. “I thought I was the only black person in all of Japan. On the other hand, in China, I became every black person who ever existed. I was Barack Obama and Lebron James at the same time.”

Jackson said that entering the Colgate community was an all too familiar experience.

These experiences brought to his attention the danger of “culture bubbles” and the importance of stepping outside your comfort zone.

First-year Mali Jensen addressed the same issue, and expressed the need for more outreach and less segregation of cultures.

“I find that sometimes there’s a lack of curiosity about the wider world because here we’re in a bubble,” Jensen said.

Jensen has moved all over the world, spending significant time in East Africa and Tanzania before coming to Colgate. It was not until coming to Colgate, she said, that she realized the benefits of having an international identity.

“I hate the question, ‘Where are you from?'” Jensen said, “because I don’t feel the need to define myself by a country. For me, my home is where my family is.”

Although these students come from vastly different cultures, they all expressed one uniform idea; that cultural understanding is contingent on cultural experience.