Colgate Gets a “B” in Sustainability 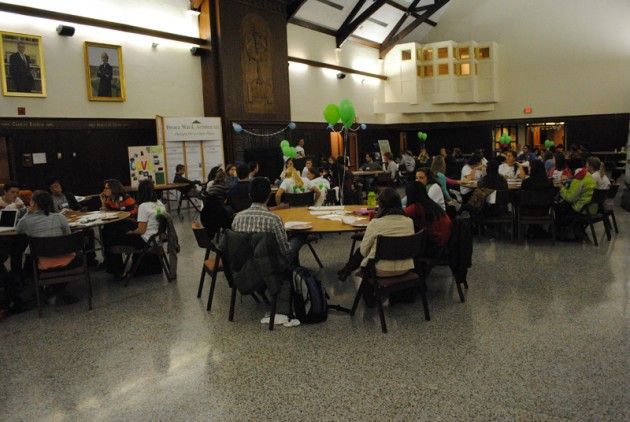 With the emergence of a new age of environmental awareness, Colgate has jumped at the opportu­nity to lead. On Thursday, October 28, students gathered in the Hall of Presidents (HOP) to participate in Colgate’s tenth annual Green Sum­mit. The event facilitates discus­sion among students, faculty and members of the community in an effort to make Colgate a more en­vironmentally conscious campus by creating green initiatives.

The day before the start of the Green Summit, the College Sus­tainability Report Card 2011 was released. This report evaluates and grades the en­vironmental sustainability on college campuses by using surveys and independent research. Colgate received a grade of “B.” Colgate’s high­est grade of an “A” came in the “Administra­tion” and “Student Involvement” assessments. Its lowest grade of “C” was given in the “En­dowment Transparency” field. The “B” grade is a measurable improvement over the University’s grade of “D+” on the 2008 Report Card.

To continue the progress, Colgate sought to improve this year’s Green Summit with the objective of maximizing the reduction of its carbon footprint. Colgate decided to hold the Summit in the fall this year, instead of the late winter, so that groups could get a jump-start on their work. A knowledgeable leader was then assigned to lead each initiative. There will also now be a Green awards ceremony that will take place around Earth Day, April 22, 2011, with the intention of creating an incentive for each initiative to reach its goal.

There are eight separate initiatives that were the focus of the Green Summit. Each initiative has a realistic goal that it is working to accomplish by the end of the school year. The initiatives include: Shapna Project, 13 Days of Green, Waddlebird, Willow Project, Recyclemania, Greenhouse, Eco-Olympics and Composting.

Two Colgate alumni, Johny Chaklader ‘03 and Michael Tringali ‘04, founded the Shapna Project in January 2009. Chaklader spoke at the beginning of this year’s Green Summit and explained the environmental responsibilities of the Colgate community.

“You all have the courage to roll up your sleeves and advance sustainability. You are stewards of planet earth as you have the challenge of advancing the entire human condition,” Chaklader said.

He praised the participants associated with all the initiatives for being involved in an environmental challenge that he described as “tackling the impossible.”

The Shapna Project was only started as a student organization at Colgate this year by junior Allison Gramolini. The project’s goal is to advance small-scale sustainable organic tea production in Bangladesh and organic coffee in Uganda to reduce pov­erty and environmental injustice. Forty percent of the net profits that are gener­ated from the selling of the coffee and tea are re-invested in different communities. Typically, 20 percent of the profits are in­vested in the local communities where the tea or coffee is harvested and the other 20 percent is invested in Madison County.

13 Days of Green, created by senior Amanda Fernley, is a 13-day campus-wide event that encourages sustainability and en­vironmental awareness. The initiative plans to have a theme for each day of the event and looks to create an environmental movie series. With the help of Campus Ecology, the Environmental Studies Department and other environmental groups, Fernley hopes the 13 days, from April 9 to 22, will educate students about the environment.

Waddlebird uses a slightly different ap­proach to getting students involved in the environmental movement. Waddlebird is a clothing company that donates some of its profits to Conservation International to help save endangered species. More specifically, the money is used to preserve rainforests around the world. Sophomore Carly Keller started the group at Colgate after the found­er of the company, an alumnus of her high school, encouraged her to spread the word.

“The initiative I ran at Green Summit will focus on coordinating with a campus group to host a benefit concert during Spring Party Weekend where the shirts we sell the few weeks before will be admission to the event,” Keller said.

The Willow Project originated from a paper that first-year Claire Grieve wrote for her FSEM: Global Change and You, taught by Assistant Professor of Biology Catherine Cardelus.

“The Willow Project is oriented around trying to invigorate the willow field that the Class of 2008 donated in order to reduce carbon emissions by utilizing the willow biomass for fuel,” Grieve said.

After noticing that the willow plants were not growing properly, Grieve speculated that the problem stemmed from deer grazing on the area. The group will spend most of its time making an economically efficient rope fence and finding odor repellents to prevent the deer from ruining the willow plants.

The recycling initiative’s major event this year is Recyclemania, a competition between several colleges that encourages waste reduc­tion on campuses and takes place over the course of eight weeks from February to April. The group is led by first-years Mara Lewis, Elizabeth Flory and Mary McGee.

“Our goal is to do well in Recyclemania, and in general improve our recycling around campus. Last year, we came in 166 out of 199 schools, which is pretty awful,” Lewis said.

Until the competition starts in February, the group aims to be better prepared by in­creasing recycling awareness and behavior around campus.

The Greenhouse initiative is a project start­ed by the Green Thumbs and led by senior Emily Sabo. This campus group promotes sustainable food. After successfully adding a garden to Colgate’s campus, the Green Thumbs are now in charge of its upkeep and management. The group must provide stu­dent volunteers, funding for the interns and the necessary tools for maintenance.

“Our goal this year is to research, find funding for and ultimately build a green­house for the garden so that we can expand our growing season,” Sabo said.

The Eco-Olympics is a three-week inter-dorm competition among first-year resi­dence halls that is sponsored by the Green Living Program, led by senior Meghan Ki­ernan. The goal of the event is to advance sustainable behavior through waste minimi­zation, reduction of water and energy use and increased recycling.

“Different events that are being explored include an Eco-Scavenger Hunt, Eco Trivia, monitoring of sub-metered buildings, par­ticipation at designated events and a Dance Party,” Kiernan said.