In The Light: Brian Day 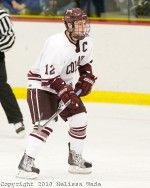 For nearly 20 years, hockey has been a fundamental part of senior Brian Day’s life.

“I started playing when I was about two years old,” Day said, who originally hails from Danvers, Massachusetts. “I got hooked.”

Interestingly enough, playing hock­ey is not a family tradition in the Day household. Day’s father, whom the economics major describes as a “bas­ketball, football and baseball kind of guy,” never picked up a hockey stick in his life. It was thus a surprise to him that his young son became a die-hard hockey player.

“I got into hockey through my friends,” Day explained. “They helped coach me in the beginning. It evolved from there.”

The leading scorer in the 2009-10 hockey season and the current captain of the Colgate hockey team, Day’s fu­ture in the sport is bright. When he was a junior at Governor Dummer Academy in Byfield, Massachusetts, Day was drafted by the New York Islanders of the National Hockey League (NHL). Day is “excited and eager” to play for the team after he graduates this May.

While at Colgate, Day has been able to translate his love for hockey from inside the rink to outside the rink. The senior serves on the Student Athletic Advisory Club (SAAC), which meets bi-monthly to discuss the student-athlete experience. The captain has also led the hockey team in various community service projects throughout Hamilton and the surround­ing communities. Participating in “Skate with the Raiders” allowed Day to teach those young and old the basics of skating. Day has also volunteered his time with the Hamilton Central School’s hockey team, helping them run practices and skating with the younger players.

While heavily focused on hockey, Day still described the balance be­tween athletics and schoolwork as “great.” He is enthusiastic about Colgate’s environment and loves the bonds formed “with teammates and with other students.”

Declaring his Colgate experience to be “awesome,” Day encourages un­derclassmen to enjoy their time at the school, since it “goes by fast.”

“The past few years have been chal­lenging but have made me appreci­ate the Colgate experience,” Day said. “This school is great. Everyone should take advantage of everything.”