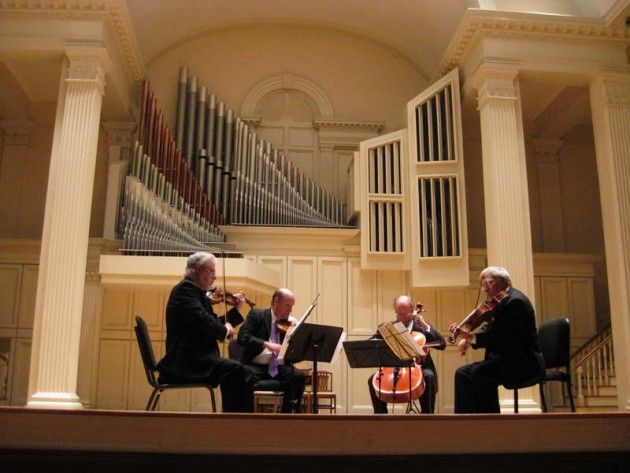 On Friday, November 5, the Manhat­tan String Quartet visited Colgate and played to a wide variety of people in the Colgate Memorial Chapel. This group has been Quartet-in-Residence at Colgate for twenty-four years. In ad­dition to giving lectures and demon­strations for music majors and CORE 152 students, the Colgate community also has the good fortune to hear them play to the public. Not only does the quartet perform throughout the Unit­ed States, but it is also renowned in Europe, Japan, Canada, Mexico and South America. Celebrating its 41st season, Time magazine writes: “The Manhattan String Quartet blends un­derstanding, cohesion and sharpness to convey the breadth and brilliance of these involving works.”

The quartet is best known for their interpretations of the 15 string quartets of Dmitri Shostakovich, as well as its performances of other 20th century classics. In the United States and Europe, the group also holds annual teaching and performing conferences for aspiring pro­fessional quartets and more amateur play­ers. Comprised of Eric Lewis and Calvin Wiersmh on the violin, John Dexter on the viola and Chris Finckel on the cello – the Manhattan String quartet gave the Colgate community a great and relaxing night on the hill on Friday.

After the audience piled into the chapel and found places to sit, the lights finally dimmed and the four men walked on stage. They started the concert off playing Mozart’s “Adagio Fugue in C minor, K. 546,” com­posed in 1788. It was a beautiful piece to listen to – and the Bach background of the piece can be heard with the change of a more classical sound to a more Baroque style.

First-year Belle Kammer described the piece as, “Extremely relaxing and enjoyable to listen to. This quartet is extremely talented.”

The next piece, “String Quartet #1, Op. 7” was a Schoenberg, composed of four dif­ferent movements. It used the 12 town tech­nique, which is far less appealing to listen to. The four movements were played with­out pause, which lasted about 45 minutes. Although it was a long time to sit through, the different styles made it interesting and kept the audience’s attention.

After these two pieces, there was an in­termission. The content expressions on ev­eryone’s faces and cheerful conversation that filled the Chapel were evidence of the talent that the quartet exhibited throughout the first half of the concert.

“I love the concert so far, I am excited to hear the final piece,”first-year Alexis Poindexter-Jenkins said.

After the break, everyone gathered in the Chapel once again for the final piece. It was another Mozart, “String Quartet in D Major, K. 575.”

First-year Sophie Dennis said of the last piece, “I was relieved when I heard it because it was nice to hear repetition and pleasant melodies since the previous piece was very discordant and I didn’t enjoy it very much.”

Overall, however, Dennis thought “the concert was a success and throughout each piece the four instruments came together to produce great harmony.”