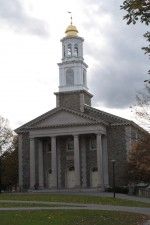 Sunday afternoon, the Colgate Memorial Chapel was full of people who were eager to hear the Colgate University Orchestra perform pieces by composers ranging from Tchai­kovsky to Handel. Many of the people in at­tendance were adults from Hamilton or other neighboring communities. There were many students in attendance as well.

They started off the concert with a piece by Manuel De Falla, “Ritual Fire Dance” from El Amor Brujo. This piece was beautifully played, from the long trills to the changing tempos. It is the story of Candela, a gypsy widow, who is haunted by her jealous husband when she falls in love with another. She thus proceeds to participate in a gypsy fire dance to expel his spirit, burning it. This piece was a great way to start the concert as it was very dramatic and intoxicatingly descriptive of the fire – as her husband’s spirit got closer and closer.

The second song they played, “En­trance of the Queen of Sheba” from Solo­mon, was composed by George Frederick Handel. There were two solo oboes, and together they pulled it off splendidly. This is about when the Queen of Sheba arrives to visit Solomon, one of the greatest kings of Israel. It is played to describe how much grandeur he has in his kingdom to show to her. Thus, the solos are alternated with grand orchestral refrains.

The highlight of the concert by far, was the third piece they played: “Cello Con­certo in E Minor, Op. 85” by Sir Edward Elgar. Sophie Shao played the solo cellist part throughout, and she, already at the age of 19, has international acclaim, hav­ing won the Avery Fisher Career Grant and performed throughout the United States, Europe and Asia. Not only did Shao dem­onstrate her ability to elucidate so many varying emotions with her bow, but in this sad concerto, she made it feel like there were actual tears falling from her strings. The great, booming sound of the orchestra helped demonstrate this almost determined sadness, as well. Despite hopeful moments throughout the piece, it was more of a pain­fully sad feeling, as Elgar was describing his sadness over World War I, and the awareness of mortality in life.

After the intermission, the orchestra had two more pieces to play. The first was a piece composed by Hector Berlioz, “Overture to Les Francs-Juges.” From the very beginning of the piece, this song is dramatic and full of turmoil. There are many extremes in this piece, from loud forceful passages to soft statements. This overture was supposed to be a possible piece for an opera written by his friend Humbert Ferrand about corruption in medieval Germany, however the opera was never finished. The Colgate Orchestra played it fantastically.

Their final piece, “Francesca Rimini, Symphonic Fantasy after Dante” by Pyotr Ilyich Tchaikovsky, was a great way to end the concert. It was about a couple in Dante’s The Divine Comedy, Francesca Rimini and her lover, Paolo, who end up in the second circle of hell for their adultery. The piece is divided up into three parts, the first part describes their sad and slow abandonment into hell. It is full of sadness and leads to a dramatic ending with three slow notes meaning “there is no hope for ye who enter here,” a word from Satan. In the second section of the song, there is a deep longing as Tchaikovsky describes Francesca’s and Paolo’s love for one another. This leads into the third and final section of the song in which Dante falls to the ground be­cause he is so overcome with emotion from the couple. As the orchestra plays, you can literally feel the couple sinking lower and lower into hell, as well as how strong of a love they have for one another.

Needless to say, our Colgate University Orchestra is a gem on campus. From the diversity of songs in their repertoire to their obvious discipline when it comes to practic­ing, they are by far an exceptional orchestra – and that is of course in part to the conductor, Marietta Cheng.