The State of Religious Literacy at Colgate 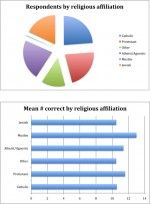 Did you know that Mother Teresa was Catholic? That the so-called “Golden Rule” is not found in the Ten Commandments? That the Jewish Sabbath starts on Friday evening?

These were the types of questions posed to Colgate students, faculty and staff in the Colgate edition of the Pew Research Forum’s Religious Knowledge Quiz three weeks ago. Administered by the Religious Studies Organization and co-sponsored by the Chaplains’ Office, the 15-question survey aimed to gauge the Colgate community’s level of knowledge regarding the customs, traditions and history of some of the nation’s – and the world’s – most prominent religions and religious movements. The questions were adapted from a longer national survey given out to more than 3,400 people by the Pew Research Forum this past September, the results of which garnered much publicity due to their revealing Americans’ surprising dearth of knowledge about their own and others’ religious traditions.

Two hundred and ninety-four people volunteered to take the Colgate version of the survey which, in addition to the questions, asked participants to identify themselves by gender, major, religious affiliation and whether or not they had ever taken a religion class at Colgate. The highest-scoring majors were religion, philosophy, history and english; those who had taken a religion course tended to score higher than those who had not, as might be expected. Protestants had the highest average score, at 11.5 out of 15, closely followed by Atheists/Agnostics at 11.4. Catholics were third, with a 10.58 average, and Jews were fourth at 10.51. Only one participant identified as Muslim, and scored a 13 out of 15, so if you’re reading this, kudos to you, sir.

If you took the quiz and are reading this article, you deserve a certain amount of kudos as well, as the percent of questions correctly answered by Colgate participants greatly exceeded national averages. According to a September 28 New York Times article, the average participant only answered half of the survey’s 32 questions correctly, while most Colgate quiz-takers answered about two-thirds right. And while the lowest score was a 4/15, many people scored above an 11; a computer science major who had never taken a religion course even managed to score a perfect 15. Additionally, the Pew Forum found that atheists/agnostics scored the highest, closely followed by Jews and Mormons, while Catholics and Protestants scored significantly lower, a figure that clearly differs greatly from the Colgate findings.

In terms of individual questions, the Colgate results were just as interesting as those of the Pew Forum. For example, a significant number of Catholic participants were unaware of the Catholic Church’s official teaching on transubstantiation – that is, that the bread and wine at communion actually become the body and blood of Christ – and many Christians mistakenly believed Jesus was born in Nazareth rather than in Bethlehem. And though there were a few questions that some people disliked due to their seemingly specified nature – such as one that asked participants to identify the name of a prominent Great Awakening-era preacher – other questions which seemed like they should have been easily answerable, were not so for many people. Some people who have been spotted regularly at Shabbat dinners did not realize that the Jewish Sabbath began on Friday, not Saturday, and others believed Mother Teresa, perhaps one of the most prominent Catholic figures in modern history, to be a Jew.

And finally, quite a few respondents believed “Do unto others as you would have them do unto you,” rather than “Do not steal,” to be one of the Ten Commandments, a statistic which should make one think twice about leaving one’s computer in the library when running to Frank for dinner.

Despite the relatively high scores of Colgate students, the survey does raise the point that religious literacy is not as high as we might assume it to be. Even at Colgate, where one might assume that most of these basic religious facts would be covered in the Core Curriculum, many students missed questions, especially about religions other than their own. Is it important for students to know that nirvana is the aim of Buddhism? Yes. Is it important for students to know that Ramadan is the Islamic holy month? Absolutely. We live in an interdependent world that requires an understanding of other peoples’ worldviews and we cannot neglect the basic tenets of our own religions when they directly affect how we interact with the world. As students of religion, we are perhaps biased in thinking that taking a religion class at Colgate would be a step in the right direction. But, however it is achieved, it is clear that religious literacy can and should be improved, even at Colgate.