This Week at the Movies: The Town 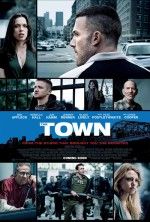 Make no mistake, The Town is an out-and-out ro­mance story. Yes, it is labeled a “crime thriller,” but that’s just spice. The romance is the core of this movie. And while that did jolt me to some degree, it certainly didn’t affect my movie experience. If anything, I walked out of the cinema thinking, “This is how romance movies should be made.” That is not to say that the other characters are not important. The characters are all deliciously fleshed out, and that’s what makes this romance movie so believable. There is a lot more going on than just the love story, and each of the supporting characters have their own lives and goals, which are not tailored to fit the love arc.

Four childhood friends, Doug MacRay (Ben Af­fleck), James “Jem” Coughlin (Jeremy Renner), Albert “Gloansy” Magloan (Slaine) and Desmond “Dez” El­den (Owen Burke) are an experienced team of bank robbers from Charlestown, Massachusetts. The movie starts with one of their heists, where they take Claire Keesey (Rebecca Hall) hostage. After her release, the four robbers realize that Claire lives in their neigh­borhood. MacRay starts to shadow her to find out if she can identify any of them. He subsequently falls in love with her, and they start a relationship. FBI agent Adam Frawley (Jon Hamm) begins to surveil the group of four. Meanwhile, Jem comes to MacRay with the next as­signment, given to him by the florist ‘Fergie’ Colm (Pete Postlethwaite), who is ultimately the boss. MacRay is reluc­tant, as his personality and goals are already being changed by Claire, and he believes that there is something “not quite right about this.” Jem convinces him otherwise, and the mission goes awry. After gunfire erupts, the team tries to get away, just as the police arrive. A beautifully shot chase sequence follows, and they escape.

MacRay confesses to his father, Stephen MacRay (Chris Cooper), that he is going to leave Charles­town, and then MacRay confronts his father about his mother. He wants to know what happened. His father walks away without giving him an answer. Jem comes to MacRay with another assignment, but MacRay gives a flat refusal. He then goes to Fergie and tells Fergie that he doesn’t want to rob banks anymore. Fergie tells him that he caused MacRay’s mother’s suicide by feed­ing her drugs, because Stephen MacRay wanted to back out of an assignment. Fergie threatens to do the same with Claire. MacRay gives in, and the rest of the movie follows the last major heist. Numer­ous complications arise, and all the characters will have to face the most difficult choices of their lives.

I had just one little qualm about this movie. This has been talked about before of course, but this movie is very similar to Heat, sort of like the similar­ity between Inception and The Matrix. The Town had its ups, but Heat was definitely on Affleck’s mind when he directed it.

Affleck’s direction in The Town is taut, con­fident and precise. If Gone Baby Gone had a tal­ented young director with a few rough edges, The Town showcases the maturing of Affleck as a director. Jeremy Renner steals the show in terms of acting, but everyone else has acted well too. The editing is flawless, and with great direc­tion and great acting, it really makes the action sequences the best I have seen in the past few years. There is a palpable tension throughout the movie, and every character is a living breathing human being. Kudos to the screenplay for the authentic dialogue, and for capturing true human beings instead of the usual “plot prostitutes” (as I like to call them).

Watch The Town. If only to remind yourself that there is a world that is actually exciting outside of Hamilton.