Men’s Soccer Knocked Out of Patriot League Tournament in Quarters 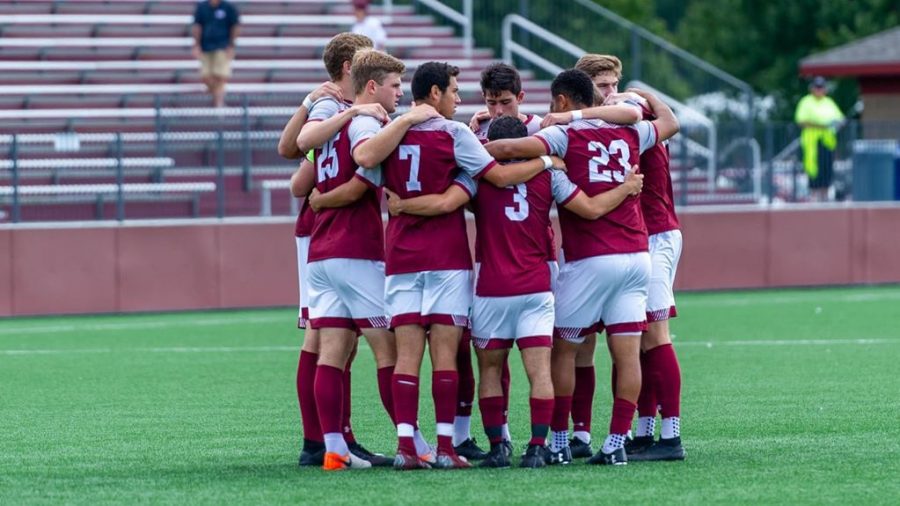 Men's Soccer Out of PL Tournament

The Colgate men’s soccer team rattled off a three-game win streak to sneak into the playoffs by defeating American 1-0 on October 26, Navy 2-1 in overtime on November 2 and Holy Cross 2-1 on November 6.

Finishing in sixth place in the Patriot League, the Raiders’ victory against Holy Cross earned them a trip to Easton, Pennsylvania to face Lafayette in the quarter finals of the Patriot League Tournament on November 9.

At Lafayette, the Raiders surrendered an early penalty kick and fought from behind for the middle of the first half. Senior defender Christian Clarke connected on a one-timer off a Bobby Foose set piece in the 32’ to level the score.

A physical first half came to a close with the score level at 1-1; Lafayette committed 15 of its 19 fouls in the first 45’.

Only 13 minutes into the second half, senior midfielder Ryan Goncalves netted the game winner. His goal was assisted by senior forward James Gibson.

The Goncalves strike would wind up  as the last tally of the match and Lafayette won 2-1 to end Colgate’s three year Patriot League Tournament title run.

“It was an unfortunate way to end the season, but I’m proud of how the team fought to make it into the tournament and then continued to fight for 90’ against Lafayette. I’m going to miss playing with all the guys that made my experience so special,” Clarke said.

The roster will look different next year, with a new face in the net replacing senior Jacob Harris and a new anchor on the defensive line to step in for Clarke. Six seniors will be graduating this year, many of whom played integral roles on NCAA Tournament teams in years past.

“I can not say enough. Our seniors had fantastic careers, one of the most successful groups in the history of the [Patriot] League and Colgate. They were a part of teams and made huge contributions to three straight Patriot Tournament

Championships, NCAA Tournaments, a Sweet 16 appearance and run to the second round in 2018. Clearly, they made a huge impact. More importantly this group epitomized what being a student athlete is all about at Colgate. High character young men who always represented Colgate in the brightest light, successful ambitious scholars, and committed athletes at the highest level who always battled and believed. They helped perpetuate our strong, positive team culture and left the program in a great place,” said head coach Eric Ronning.

The underclassmen-heavy team will come back next season with 12 first-years, 11 sophomores and four juniors.

“I know the loss will add an edge and hunger in the off-season which is a hugely important time. You will always lose some quality pieces, but we have a young and exciting group of returning players who gained so much experience this year who are hungry to get better and get back to the top. So much talent and character to work with. The process of building a championship caliber team begins now, and we are all eager to get back to work,” Ronning said.

The Raiders will look to reclaim their spot at the top of the Patriot League next year.