Understanding Course Registration and the Waitlist 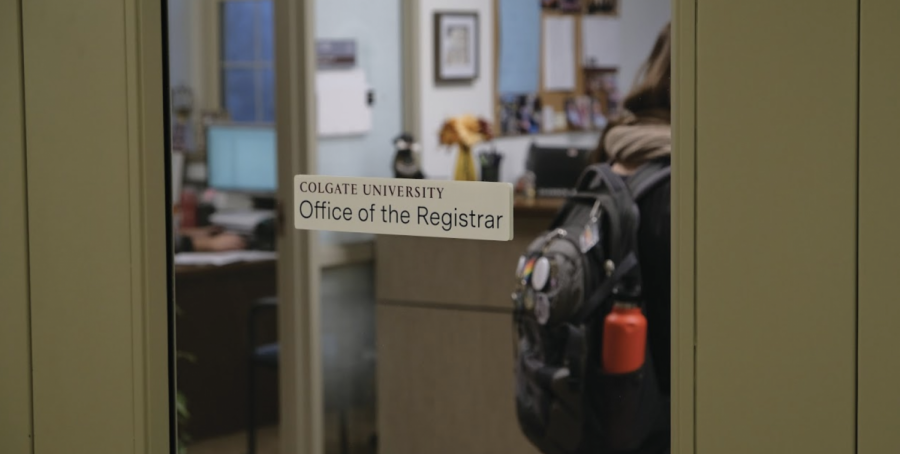 Office of the Registrar at Coglate

Course Registration for the Spring 2020 Semester opened on Monday, November 11 for seniors, Tuesday, November 12 for juniors, Wednesday, November 13 for sophomores and Thursday, November 14 for first-years. Occuring every November and April, course registration allows students to enroll in classes for the upcoming semester or to be placed on a wait list if that respective course is already at capacity.

The waitlist system gives students the chance to enroll in a course should a spot open up; however, before the Drop/Add period, which takes place at the beginning of every semester, the waitlists reset. According to the Current Student Registration page on Colgate’s website, the reset function was implemented “to allow online access to open seats.”

Deputy Registrar Sue Burdick said that the waitlist is reset before every semester so that the online system of class registration does not inhibit students who wish to add a class during the Drop/Add period.

“Waitlists are [only] for the registration period. They have never been an official part of the Drop/Add period. Previously, students wishing to register for a course during Drop/Add were required to obtain instructor permission, whether a seat was available or not, and whether a waitlist had been in place during registration or not,” Burdick said. “Once we went to online Drop/Add, we had to physically remove the waitlist so that those seats could be available online. The waitlist prevents anyone from registering [for a class].”

According to Burdick, the Registrar’s Office begins to manage waitlists the week after registration week up until the end of the term. Online registration closes around January and June for the spring and fall semesters respectively. Burdick said that sometimes faculty manage their own waitlists as well. The Current Student Registration page on Colgate’s website says that, if a faculty member offers a student spot in his or her class, that student is required to bring proof of permission to the Registrar’s Office in order to officially change their enrollment status from “waitlisted” to “registered.”

Regarding the current class registration process, which is organized by class year and the first initial of one’s last name, Burdick said that nothing significant is to change in the foreseeable future.

“There might be some difficulties with the [class registration groups]. If you’re in the last group, you are at a little bit of a disadvantage in that group. But, doing it [class registration] all at once [for students] has disadvantages too. There will be consequences to that which students won’t like. There’s no magic bullet for the perfect process,” Burdick said.

Colgate’s Academic Affairs Board (AAB), which is part of faculty governance, can propose legislation to faculty that is tailored to the “academic functions of the university,” as described on the AAB page of Colgate’s website. One of AAB’s responsibilities is registration.

Junior Ben Becker, who is a Student Government Association (SGA) Senator and a representative on the AAB, said that there are currently no plans for the AAB to propose changes in the class registration process.

Professor of Political Science Michael Hayes said that changes to class registration might not occur soon, but did not rule out the possibility of any significant reform to the process.

“I’m sure the system will evolve over time, but I don’t see any problems with the current system that suggest a need to change things in the near future,” Hayes said.

The last significant change to the class registration process was the transition from “Arena Drop/Add” to online registration in the early 2010s. Class registration occurred in the Hall of Presidents, and every department had a table for students to get signed in and out for courses.

Professor of Political Science Stanley Brubaker said that while the current online class registration process is not perfect, it is a significant improvement from Arena Drop/Add.

“We were way behind other universities in going online for class registration. Back in Arena/Drop Add, when students wanted to enroll in a full class, they had to check back if there was an opening. It was essentially an accident that a student checked back when there happened to be an opening. The Arena process had some positive features: energy was in the air; they usually served cider and coffee; you could chat with students and colleagues. But regarding actual registration, the process was time-consuming and capricious. The process we have today may have its imperfections, but it is are more efficient and fairer than in the Arena days,” Brubaker said.

Burdick said that faculty approved of the change to an online class registration process.

“When the process last changed, the Registrar presented options to the faculty, and [the faculty] ultimately approved [online drop/add]. We do have control over the day-to-day minutiae [of drop/add], but ultimately, the decisions are made by faculty governance,” Burdick said.

Junior Nam Tung Nguyen said that while he is satisfied with class registration, he recommends professors include their syllabi in the course descriptions so that students know what to expect from a class.

“I think that during registration, people not only care about classes but also care about the content and the professors that teach it. I think that some way to get a better insight into what a class is like before the Drop/Add week is for a professor to upload their syllabi online,” Nguyen said.

According to Burdick, although nothing major is in the works in terms of amending class registration, the Registrar’s Office continually looks into means for improving the process.

“We don’t try to fix things that aren’t broken, but I think we spend the right amount of time looking into processes. We’re always looking to make things better in whatever way we can… Sometimes that’s looking into peer schools, and sometimes that’s using our brainpower and Colgate resources to figure it out,” Burdick said.