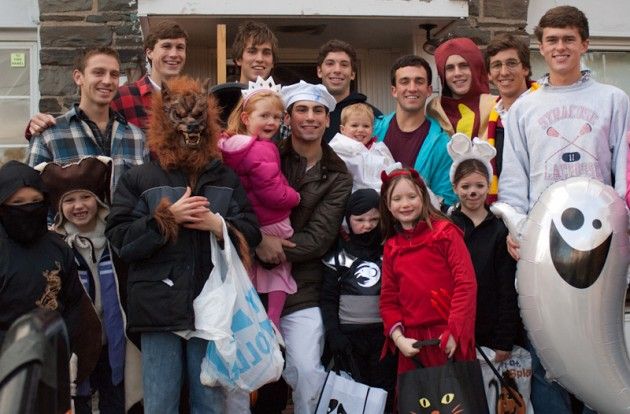 Despite the unexpected early arrival of snow, Colgate’s Inter-Fraternity Council (IFC) hosted a Halloween themed phil­anthropic event for local kids last Sunday, October 31. The IFC, a collaborative ini­tiative between Colgate’s six fraternities, is an organization devoted to continually im­proving inter-fraternity relations as well as strengthening ties with the school and other Colgate-affiliated organizations.

“Whether it is DU’s strong ties to Uplift­ing Athletes, Beta’s hosting of benefits for charities or other fraternities’ unheralded philanthropic activities, the IFC has been working to show the rest of the campus com­munity what fraternities really care about,” IFC’s Executive Vice President and senior Matt Scheer said.

This year, the IFC wanted to host a strictly philanthropic event involving all the fraternities. Scheer noted that the IFC thought that Halloween would provide a perfect opportunity to do just that.

The day’s events started with a showing of Casper the Friendly Ghost at the Hamilton Movie Theater, which the IFC members re­membered as an all-time classic. Next, the Colgate Bookstore hosted kids and their par­ents at its annual Halloween Party, which in­cluded arts and crafts, a balloon shape wizard and a costume parade. Afterwards, each fra­ternity welcomed trick-or-treaters and their parents to their houses for candy and Hal­loween games. Theta Chi had caramel apples, Delta Upsilon (DU) had mummy wrapping, Beta had sack races, Phi Tau had pumpkin decorating and Phi Delta had pumpkin bowling.

President of the IFC and senior Gaven Leib recognized the importance of incor­porating the fraternity houses into the day’s activities.

“We wanted to welcome families into our houses, showing that we don’t just use our houses for social events and that they aren’t just your typical, stereotyped frat houses,” Leib said.

Even the IFC members themselves were surprised by the event’s strong turnout, es­pecially considering the cold weather and the fact that this event was an original idea. Well over 100 local families, Col­gate-affiliated and not Colgate affiliated, were in attendance.

“As a parent,” Dean of Students Scott Brown said, “I am extremely appreciative of the many opportunities and activities for children. Our kids had a great time, and we appreciate the IFC taking the time and care to plan so many events for Halloween.”

Due to the success of Halloween in Ham­ilton, the IFC is already discussing plans for further philanthropic events later in the year. Employees from the Colgate Bookstore as well as the Hamilton Movie Theater also ex­pressed their interest in continuing to work with the IFC in the future.

“Today’s success has us planning on mak­ing Halloween in Hamilton an annual event for the IFC and possibly hosting similar events throughout the year. Several organi­zations have already expressed an interest in hosting something similar with us later this year,” Schon said.