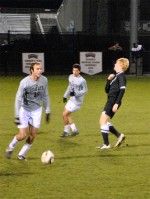 The Raiders had a solid week preparing to head down the home stretch of the Patri­ot League season with a 0-0 draw at Navy and a loss to No. 16 Princeton Tigers 3-1.

The Navy game was a huge battle for the Raiders, as their Patriot League destiny rests on their fight against Navy and up­coming game against American University, their final game of the season. The game was important for Navy as well, as the Mid­shipmen have yet to clinch a spot in the Patriot League Tournament.

Colgate began the game as the more des­perate team, peppering the Navy net with chances but never finding success. As the half reached its midpoint, the Midshipmen challenged on offense, but junior goalkeep­er Chris Miller was up to the task and kept the game 0-0 through the first half.

As the teams came out for the second half, Navy played with noticably more in­tensity. They were all over the Colgate goal, but Miller came up huge every time. He finished the game with 7 saves, and was named the BRINE Goalkeeper of the Week for his efforts.

With a few minutes left in the contest Colgate picked up the action, but the game was headed to overtime.

Colgate is no stranger to extra periods, having played in 8 over time contests this season. Neither team had impressive scor­ing opportunities, rendering the overtime relatively dull. In the end, the Raiders escaped with an important road point.

Next up for the Raiders, however, was Princeton, and Colgate was more than hap­py to return to Van Doren Field for home field advantage. The game against the Ti­gers was Colgate’s final non-conference match-up, and as a ranked opponent Princ­eton gave the Raiders a chance to make a splash on the national scene.

The game started off quietly, as both teams seemed to learn more about their unfamiliar opponent with each minute. Midway through the half Colgate gener­ated a great chance on the Princeton net but the Tiger’s keeper was up to the task, preserving the tie. The momentum from that save then seemed to invigorate the Ivy League opponent, as the Tigers struck twice, in the 38th and 40th minutes, ending the game on a sour note for Colgate.

The Raiders started the second half ea­ger to make up for their two-minute lapse in concentration. Although they didn’t generate great chances, they controlled possession and were rewarded in the 67th minute as sophomore Mike Reidy found the back of the net off a great pass from senior Steven Miller.

It seemed as if Colgate now had the mo­mentum it needed to tie the game up, but only seven minutes later Princeton dashed those dreams, renewing their two-goal lead in the 74th minute. That goal took the wind out of Colgate’s sails for good, and the Tigers were able to increase their winning streak to 10 games.

The Raiders must put that game behind them, however, as their biggest task of the season awaits them on Saturday. The Amer­ican University Eagles comee to town, and a Colgate win ensures home field advantage for the Patriot League tournament. With a loss, the Raiders are still assured a spot in the tournament, but will most likely have to travel to an opponent’s field. The game is slated to begin at 4 p.m. on Van Doren Field.