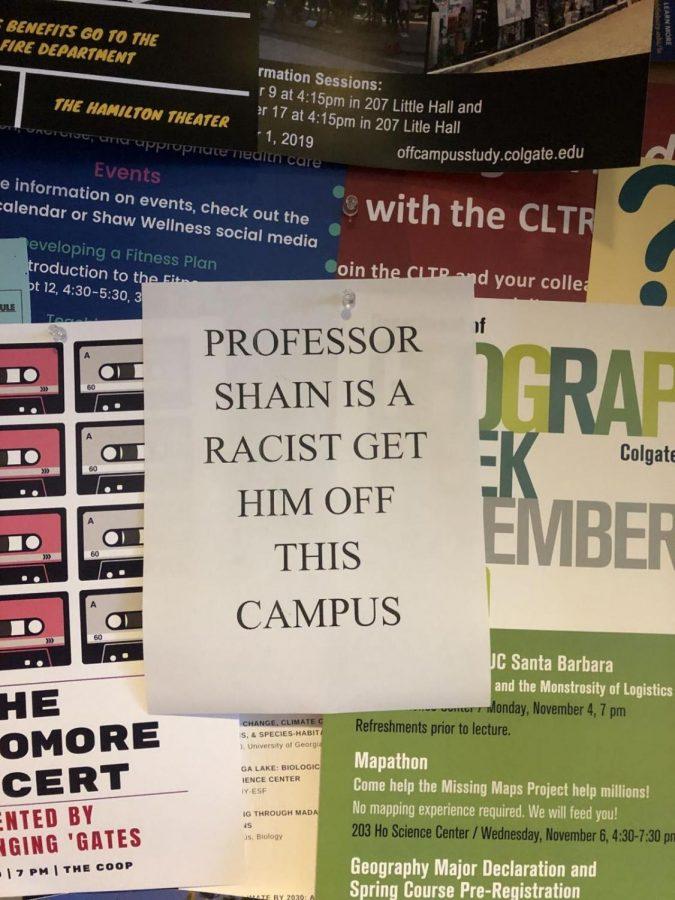 A flyer put up in the COOP that reads, "PROFESSOR SHAIN IS A RACIST GET HIM OFF THIS CAMPUS." These posters were also found in McGregory Hall and Alumni Hall.

On Wednesday, October 30, at a speak-out organized by the Student Government Association (SGA) in response to the racist message written on a whiteboard on a suite in theBryan Complex, Professor of Political Science Barry Shain was mentioned by name by multiple students sharing anecdotes in which they perceived Shain to be making racially charged and biased comments. The anecdotes shared regarding Shain were not brought up in direct relation to the racial slur written on a student’s whiteboard the night before.

Shain became a topic of discussion after the conversation shifted focus to sharing moments when students felt targeted or unwelcome on campus. Chair of the Political Science Department Nina Moore said that prior to the comments made at the speak-out, no complaints “formal or informal” regarding Shain had been submitted to her as department chair.

“Students who wish to file a complaint concerning this or other allegations may do so through the proper channels, namely by submitting their first-hand account(s) and any supporting evidence to me, to the Social Sciences Division Director Adam Burnett, or to the Dean of the Faculty Tracey Hucks. Any such complaint may be submitted confidentially (until final course grades are reported to the Registrar’s Office in December), if necessary. Or, students may file a grievance through the university’s Equity Grievance Process by contacting Professor Lyn Rugg,” Moore said in an email.

The next day, October 31, anonymous fliers were seen posted in Alumni Hall, McGregory Hall, and O’Connor Campus Center (the COOP) stating, “PROFESSOR SHAIN IS A RACIST GET HIM OFF THIS CAMPUS.” Associate Vice President for Campus Safety Daniel Gough said the fliers were originally reported to Campus Safety by students, faculty and staff via phone and email before Campus Safety removed the flyers from the COOP. The fliers were taken down because they violated Colgate’s advertising policy which states all posters must  “include the sponsoring organizations name.”

“Any fliers removed in other locations on campus were done so by community members other than Campus Safety staff, presumably also for being in violation of the university’s advertising policy,” Gough said.

Campus Safety will not launch an investigation into who made and posted the fliers.

In response to the anonymous fliers, Dean of the Faculty Tracey Hucks shared this statement:

“I am grateful to the students who participated in last night’s speak out and those who made themselves vulnerable by sharing their concerns and personal experiences with racism on this campus. I recognize that some members of our students, staff, and faculty community are hurting. Yet anonymous postings do not contribute to open, productive discourse.

Concerns raised last night, followed by today’s posters, reflect a desire for action. While I cannot comment at this point on any individual faculty member, I take these concerns seriously.  I am now working with the appropriate offices to determine how to best address issues raised at the speak out and intend to do so with care, deliberation and in line with Colgate’s policies and shared governance system.”

Racism and racist acts diminish our ability to create a campus that is reflective of the values we seek to exemplify. I implore us to embrace our best selves in order to foster a Colgate of inclusiveness, character and integrity.”

This is not the first time Shain has received backlash for his comments regarding race nor the first time students have protested against him. In 2001, students held a sit-in for seven hours in James B. Colgate Hall, which houses the Office of Admission, protesting an email sent by Shain to a student. According to a New York Times article by Karen W. Arenson covering the incident, Shain was responding to a request from a student to be on their radio show to discuss race relations on campus. In the email, he stated “that too many students of color are seduced into taking exotic courses that make few demands on them rather than those courses that force them to grow emotionally and intellectually. It seems to me that if students of color graduate with inferior written and analytic skills to those of their white colleagues, Colgate faculty are certainly not serving the needs of all of their students.”

Professor Shain was contacted in relation to this story, but declined to comment.