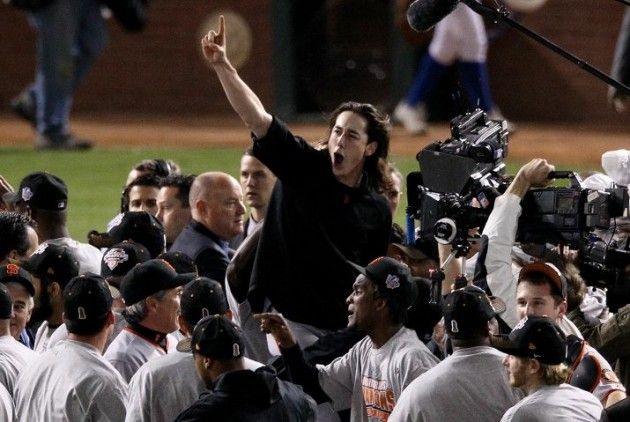 Every once in a while in the sporting world, something happens that transcends the normal order of things. Somehow the stars align and you find yourself witnessing something no one has ever seen before.

Monday night in Arlington, Texas was one of those moments and the first time anyone ever said, “The San Francisco Giants have won the World Series.”

The Giants left the friendly confines of New York City and the Polo Grounds 52 years ago. Televisions broadcasted in black-and-white, Dwight Eisenhower was presi­dent and The Beatles wouldn’t be famous for another five years.

The new San Francisco club would spend the next half-century fielding teams with some of the greatest baseball players of all time but every year, a different squad would hoist the trophy and the Giants and their fans would be left wondering what next year would bring.

That all changed Monday night in Arling­ton. When Brian Wilson struck out Nelson Cruz, who swung on a classic 3-2 count, Giants fans around the world fell into an instant state of euphoria. What made this title so sweet was not that it had not come for so long, but that it had been so close so many times before. They had the go-ahead and winning runs at second and third base in ’62 when Willie McCovey’s scorching line drive was caught. Without the earthquake in the middle of the ‘89 series, who knows what could have happened? No one even wants to mention the ‘02 collapse, filled with the pain of thundersticks and rally monkeys and Felix Rodriguez.

This year has been miraculously different than those that hold the memories of defeat. There were no superstars, only a feeling that this was the year. The Giants and their fans knew from early on that there was something special about this team. The concept of Giants baseball being “torture” brought everyone together like never before. They always played close games, always held their breath until Wilson somehow got that final out (usually with a few runners on and that infamous 3-2 count).

When a team like this wins, it’s not just for the team but for all the generations of Giants fans who stuck around and hoped that this might be the year it would all come together. It’s also for the former players, guys like Rich Aurilia, J.T. Snow and yes, even Barry Bonds. For an organization like the Giants where “once a Giant, always a Giant” really holds true, this World Series is the ultimate redemption.

A team like this really shows why baseball is rightfully America’s pastime. Cody Ross, the Florida Marlins castoff for whom they received nothing became the hero of the Giants post­season. Edgar Renteria, hurting all year and only on the team because of a grand slam he hit against the Rockies last year winds up being World Series MVP. These are some of the guys who helped beat the best pitchers in baseball.

Roy Halladay was coming off a no-hitter be­fore the Giants broke him down. In the Series, every analyst gave the Rangers two automatic victories in Games 1 and 5, both Cliff Lee starts. The Giants beat him both times, home and away, including the clincher.

From a certain perspective, it’s nice being the underdog even if it’s not for any valid reason. Somehow, the Giants were written off in every tilt including the World Series. The Giants had a better regular season record than the Rangers, hit the same amount of home runs in a pitch­ers’ park and had a superior pitching staff. Of course, once Wilson threw that cutter by Cruz the predictions counted for nothing.

This Giant tale cannot possibly conclude without a mention of the team’s closer, resi­dent “mental-assassin” Brian Wilson. Of all these Giants, Wilson has undoubtedly been the favorite of both the hometown fans and just about everyone else. His dyed-black beard, off-the-wall personality and repeated references to “The Machine” have enthralled baseball fans across the country. (If you don’t know “The Machine” then I urge you to do a quick video search.) In short, Wilson has been the poster boy for this quirky collection of castoffs and misfits curiously dubbed “Giants”. There was truly no better way to end their 56-year title drought than from the hand of the man Fox an­nouncer Joe Buck described as having, “a very unique perspective on life.”

As a lifelong Giants fan (all of my 18 years, thank you very much) this championship could not be sweeter. I thank this once-in-a-lifetime collection of players for bringing something to San Francisco that the city has never seen. Now I hope we don’t have to wait another 50 years for the next one.