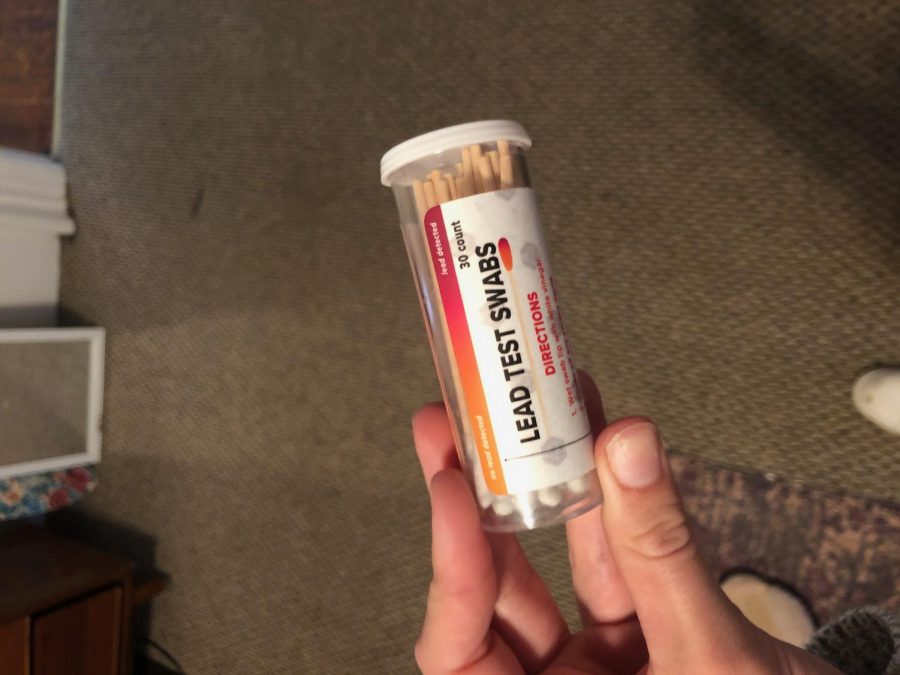 This is the at-home lead test senior Chelsea Rogers bought on Amazon to test her water at on W Kendrick Ave. The test results were positive for increased levels of lead.

Update 11/18: Director of Environmental Health and Safety Mary Williams said the lead tests photographed used by Chelsea Rogers and her roommates is not appropriate for testing lead in off-campus houses. Rather, students should use the free lead water testing offered by NY state.

“These are not appropriate or recommended for water testing. New York State offers free lead water testing through a certified lab, with a 6-8 week turnaround time. Details are available here and there is a link at the bottom of the page to find NYS certified laboratories if someone wanted to work directly with a lab and not wait for the free kit to arrive,” Williams said.

Elevated levels of lead were first discovered by a chemistry student in the water of 72, 80 and 84 Broad Street houses on October 8. Elevated lead levels were found in buildings between 40 and 118 Broad Street (barring 113 and 116 Broad), James B. Colgate Hall, James C. Colgate Hall, Case-Geyer Library, Hamilton and College Street residences, including the Parker, Newell and University Court Apartments. “Non-potable” signs went up in all these locations along with filling stations and filters on residential sinks. In total, the University has conducted 28 first-draw tests on University property, 14 of which returned with elevated lead levels.

Testing conducted on October 18 at Chenango Nursery School, located at 59 West Kendrick, showed levels of lead at 540 parts per billion (ppb). The US Environmental Protection Agency (EPA) “action level” for lead in drinking water is 15 ppb, meaning the level of lead that requires medical surveillance, increased industrial hygiene monitoring or biological monitoring. Director of Environmental Health and Safety Mary Williams said the University provided the nursery with water coolers and faucet filters before the water sample was collected because children under the age of six are an “at-risk” population, requiring extra care. The University has also offered blood testing to children at the nursery. As of October 28, the University reported that 38 students and one Colgate staff member have received negative results for lead on their blood tests.

Testing conducted on October 23 at Schupf Studio, located at 54 Montgomery Street, shows levels of lead at 720 ppb. Both of these buildings are outside the initial scope of the elevated test levels which were concentrated along the Broad Street corridor of the Village. Testing has shown normal levels of lead at Campus Safety, the 1965 Arena and 9 East Kendrick Avenue.

The filter checks conducted on November 1 at 80 and 40 Broad Street showed that the filters have been successfully filtering out the lead in the water, as testing at 80 Broad showed 2.3 ppb, down from 324 ppb and 40 Broad results showed 2.9 ppb.

On October 28 the University and Village of Hamilton announced they would hire an engineering firm to conduct an investigation into the source of the lead. Williams said all involved parties have already met with the prospective firms and is waiting to receive all final proposals to make a decision. Before making a decision, the Village will need to convene a special session to approve the chosen firm. Once the firm is chosen and approved, it will advise the University and the Village on how to proceed with lead investigations for an undetermined amount of time.

In an article published on the Village of Hamilton’s website on October 30, the Village said that they have been working with the University to test University-owned buildings, but has yet to conclude that there are issues with the Village’s water.

“The Village has no reason to believe that there are elevated lead levels in its public water supply,” the article stated. “The Village has recently taken and tested samples from its groundwater well source and at eleven Village hydrants located throughout the Village, including near Broad Street. All these sample test results have reported lead levels that are essentially non-detectable at less than one part per billion. As a result, the Village reassures the public that the Village water is safe.”

Colgate’s water supply comes from the same wells as the Village of Hamilton’s water supply. This would mean that the source of the lead is not in the water supply, but rather due to internal plumbing issues, according to Mayor RuthAnne Loveless. The Village is additionally developing a testing plan beyond the EPA and Health Department requirements in order to test water at 60 additional Village properties.

“While the Village is confident that the water supply itself does not have elevated levels of lead, conditions at individual properties and buildings can vary widely and, in some instances, can result in lead content levels that are in excess of the EPA action level. The Village is continuing to work with Colgate University and the Madison County and New York State Health Departments to better determine why this is occurring at certain properties and how best to mitigate any identified conditions,” the Village’s article said.

In the absence of consolidated residential testing in the Village of Hamilton, many residents have begun to test their water themselves. Senior Chelsea Rogers said she and her roommates did a self-test they bought from Amazon which showed elevated levels of lead in their water at 33 West Kendrick. Seniors Kate Hinsche and Kate Bundy, along with others, self-tested their water but discovered no elevated levels of lead. Arabic language intern Ayman Abdalla has yet to test his water and said he has received no information from his landlord.

Senior Kara Schindler, who lives in an off-campus residence, said she feels overlooked by the University.

“I am a student here and I expect the school to protect me even though I’m off-campus,” senior Kara Schindler said. “Regardless of where I live on campus, I feel I should be looked after by the school just like all my peers who live in dorms. I’ve been here for four years now and I’ve never had to spend so much time every day thinking about and finding ways to get clean water. No one is looking out for us.”

Moving forward, Williams said all future sampling will follow the advising of the third-party engineering firm once it is hired.

“Some of our most recent results have confirmed the efficacy of the faucet-mount filters and have confirmed that whole-building particulate filters would remove lead from the water. I expect we should have a pilot filter setup in a building within the next few weeks, which will certainly involve additional testing,” Williams said.