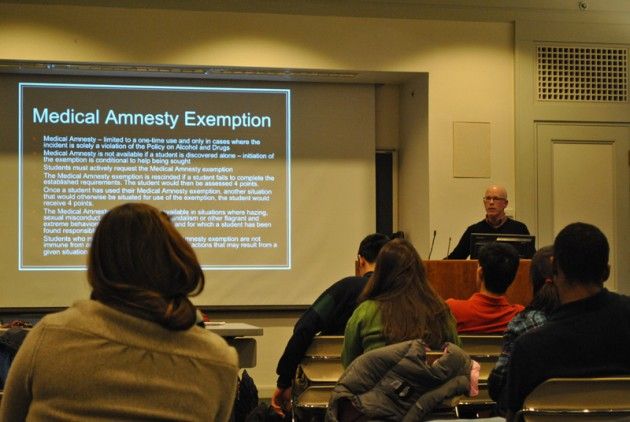 “Is there a better way to address vi­olations?” Assistant Dean of Students Corey Landstrom asked.

Following in the footsteps of Bucknell, Hamilton, Gettysburg, Colby, Carthage, Union and Gal­ludet, Colgate is moving toward “the points system.” Last week, Landstrom met with the Student Government Association (SGA) Senate to go over the proposed “points system.” He presented how the new system will fo­cus on accountability, clarity of policy and forgiveness. Account­ability will be emphasized by the new system’s specific point value for each violation. Clarity will be improved by the creation of a point value chart which al­lows students to “predict [the] outcome” of their actions. And forgiveness will be implemented through limited amnesty and “point forgiveness.”

The new “points system” now on the agenda of various student and administrative groups is, for the most part, a very similar system to what is currently in place. Campus Safety will still make observation-based reports and punishment is still decided at an arranged disci­plinary meeting. Underage drink­ing and drinking games are still prohibited on campus. The main difference between the old and new systems is that the new system is mostly expressed in one easily read chart. For example, the cur­rent “points system” document has “possession of hard alcohol under the age of 21” valued at three points with a fee, a fine, a notification to the athletic administration and an alcohol tutorial initial assessment. It is all neatly organized in a row: cause and effect.

It is important to note that only the highest point valued offense is giv­en to the student. In other words, if a student violates three policies at once, the first worth three points, the second worth four points and the third worth five points, the student only gets five points added to his record. If a stu­dent is a repeat offender of disciplin­ary policy within the a single semester, Landstrom explained that he or she “would receive [one] additional point above the points associated for the sec­ond violation.” This additional point is a “corollary point,” and there are mul­tiple ways to gain this type of point. According to the current document on the “points system,” another way to earn [two] corollary points is by failing to “comply with a University official or local law enforcement professional.”

Landstrom noted that a semester free of disciplinary issues takes a point off the student’s record and “an ad­ditional point may be removed upon completion of the opt-in educational program which is separate from a tutorial.” These programs would be offered four times, throughout each academic year.

Besides providing opportunities for “forgiveness” of violations in the general sense, the new system also allows for “forgiveness” of specific violations that have long concerned students. Currently, University policy does not include any form of “medical amnesty” for students un­der the influence who need emer­gency care. In the proposed “points system,” there is a one-time “medi­cal amnesty” for each student in his or her Colgate career.

Another form of “forgiveness” from the “points system” is seen in the system’s attempt to help stu­dents with minimal disciplinary histories applying for jobs and to graduate schools. The new system introduces a “threshold” for releas­ing disciplinary history to employ­ers and graduate schools. Under the “points system,” a student’s dis­ciplinary record would be hidden, the vast majority of the time, if he had below six points. This advanta­geous system would only apply to violations incurred under the new system and would not help uppper­classmen who currently have disci­plinary records in their application to employers and graduate schools. The SGA has expressed concern on this issue. As Landstrom put it, the new system will not “speak to old violations. It is, in effect, a new and separate beginning.”

First-year Senator Sam Flood feels that the Senate is “happy with [the] change, but there has been some hesitation.”

The proposed system is now in the hands of the Senate.

While the new system seems to of­fer many benefits for students, there is a catch: parents will become notified more easily than under the current disciplinary system. Landstrom ar­gued that early notification of parents would reduce students’ chances of continuing questionable behavior.

Landstrom was initially skepti­cal of point-based systems, but their success at schools like Gettysburg has changed his mind. He urged students that the new system is “not about increasing enforcement.”

While there is no set-in-stone plan for improving the system be­yond implementation, Landstrom made it clear in an interview that he expects that there be a review of the data post-implementation to ensure that the system is “fitting in the way it was intended to fit.”

The proposed system is one of the largest changes to Colgate’s disciplinary system in recent his­tory. In an interview, Landstrom mentioned the DWI policy from ten years ago and the honor code overhaul three years ago as other significant changes. The disci­pline system is reviewed every other year.

While there are legitimate concerns with the “points sys­tem,” it seems that the system’s intention is to help students understand the consequences of their actions. The “points sys­tem,” if approved at January’s Board of Trustees meeting (and if approved by various other groups beforehand), could be implemented as early as spring semester or as late as next fall.