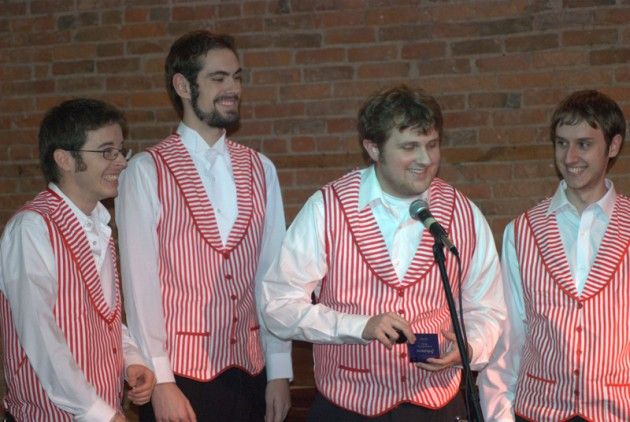 Last Friday, November 5, the Barge held their once monthly Open Mic Night hosted by sophomore Will Hazzard. An audience of about 10 to 15 students and residents of the Hamilton community enjoyed a variety of musical offerings. The first three songs of the night came from the emcee himself. On acoustic guitar, Hazzard performed a mix of original songs and covers, ranging from a Squidbillies tribute to a song by the Grateful Dead.

Some highlights of the night included an in­strument seldom seen in Open Mic Nights: the cello. Daryl played the perfunctory three songs on the cello. He played with a different take on the classical way of playing the cello; instead of using the bow to play, Daryl strummed on the neck of the cello during his first song. It looked and sounded like he was playing a guitar. Daryl said he had just written his third song earlier, but he managed to perform it very well.

The Testostertones were back for an­other Open Mic Night performance. This time, they added to their barbershop quar­tet charm with matching white button downs and striped red and white vests. The outfits were envied by all, and more than one audience member complimented the group on them. Along with the costumes, the Testostertones gave a great three-song introduction to the barbershop quartet. Leading with “Goodbye, My Coney Island Baby,” the group captivated the audience.

Employing a different musical talent altogether, Josh Hally played his songs on the piano. After an attempt at playing a Regina Spektor song, Josh stuck to what he knew and played his own songs as well as his own version of a Journey medley. Two of his original songs were “Stunt in My Head” and “Baby Gone,” which he wrote recently.

The eclectic group of instruments made the night quite interesting, a step above your standard acoustic guitar strum-a-long. It may be getting colder, but the Barge is still as toasty warm and filled with the smell of coffee as ever, so gather up your musi­cally talented friends and perform at Open Mic Night.