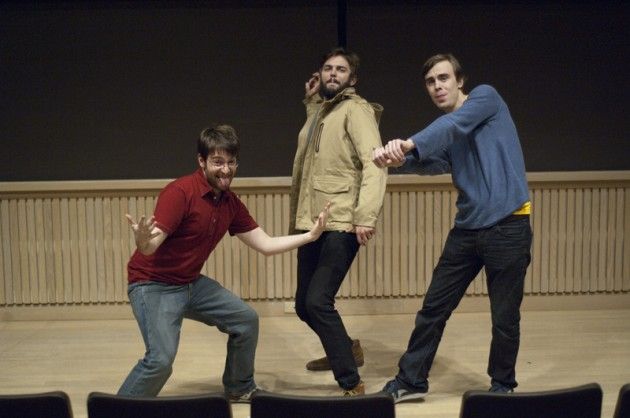 Procrastination is the way of life for most college students. Ev­eryone has their preferred method of putting off that lab report or writing that eight-page research paper. As a result, new web­sites like Texts from Last Night and College Humor have arisen to much success, feeding these procrastination flames. For these very reasons, you would have been hard-pressed to find a seat in Love Auditorium last Thursday night when College Humor Live came to Colgate.

Popularized by the Jake and Amir series and such spoofs as Four Loko commercials, College Humor began touring the country to bring the laughs to students in person.

Hosted by Jeff Rubin and Pat Cassels, the night started out with a play-by-play of what hap­pens during each year of college. Beginning with the first year, they addressed the all-important issue of the roommate. Most of us probably lucked out by not hav­ing a roommate who falls through the roof or throws a scissor into your arm like the ones in the videos they presented. They also elicited a number of laughs show­ing before and after pictures of the “freshmen 15.”

Next came sophomore year. Jeff and Pat showed a video sent in by a student who, alongside his friend, decided to roll down the stairs in a laundry bin. Despite sophomore meaning “wise fool,” clearly these guys did not think it through thoroughly and ended up flipping over on their heads.

Junior year is apparently marked by experiencing a first serious relationship. They proceeded to show a variety of photos including a man spooning with a horse.

Finally came senior year, the year of pranks. College is all about having fun and pulling the best pranks, but putting a dead bird in your friend’s cereal box, which they will eat out of the next morn­ing, is really just gross. The second moral of senior year: don’t take a flaming shot. You will set your face on fire.

Following this introduction by Jeff and Pat came a solid perfor­mance by Nick Thune. Breaking out such jokes as, “I wear cam­ouflage underwear to support my troops,” “lifesavers only work if you’re a diabetic” and some rant about the word “bombarded,” Thune was genuinely funny. He performed a few musical numbers including a love song called “But­terflies.” He wrapped up his seg­ment with a spoof about Missed Connections on Craigslist, enlist­ing a few audience members from the first row.

To wrap up a night of good laughs, Jeff and Pat hosted Shame­ful Trivia, giving away not only a book and a t-shirt, but an en­tire pizza from New York Pizze­ria (Slices). Among the questions were challenges to name four “Weird Al” Yankovic songs, name the Jonas Brothers in order from oldest to youngest (including the Bonus Jonas, Frankie) and to theatrically deliver a line from a Lord of the Rings movie.

Rife with photographs and videos that you probably would have preferred not to see, the overall presentation was a crowd pleaser. College Humor will only be tolerated while we’re in college, so why not enjoy it while we still can?