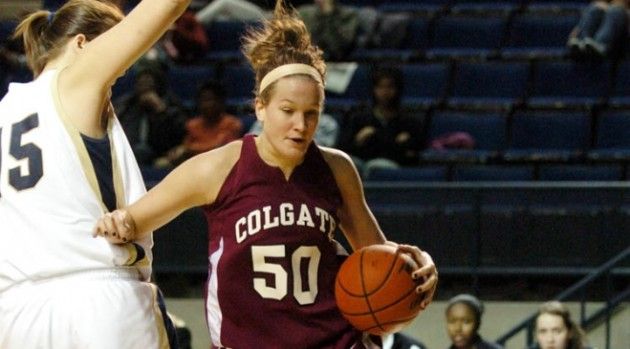 Colgate women’s basketball team opened their season this week with a pair of games on the road. First, facing Rhode Island on Saturday, the team fell 59-47. Then, on Monday evening, the Raiders lost to Siena, 66-56. Both games were tight contests, wherein, after the teams nearly matched each other in the first half, the game was decided in the second.

This year, Colgate introduced three first-years to the program: point guard Lauryn Kobiela, shooting guard Catherine Lewis and forward Kathryn Taylor. Last year, the team graduated only one senior, guard Katie Garman. The Rhode Island Rams are currently 2-0, having faced both Colgate and University of Massachusetts at Lowell (in an exhibition game) while Siena is 1-1, having lost to Navy before facing Colgate. The Raiders are 0-2. In the Patriot League Pre­season Poll, the Raiders were picked to tie for sixth with Lafayette. American was picked to finish first over the defending champion Lehigh Mountain Hawks.

“I am very excited to work with Lauryn Ko­biela, Catherine Lewis and Kathryn Taylor,” Head Coach Pam Bass said. “Each of them not only makes us deeper as a team, but they have the ability to impact us on the court. Each of them is very hard working and dedicated to making themselves better for the good of the team.”

In the game against Rhode Island, sophomore guard Jhazmine Lynch racked up a game-high 18 points, three steals and three rebounds. Senior forward Krista Moser and junior center Tricia Oaks also put in stellar performances, as Moser had a game-high 12 rebounds and Oaks contrib­uted 11 points. During the first four and a half minutes of the game, Rhode Island posted seven unanswered points. Moser ended the streak with a jumper. Throughout the first half, the teams played a tight game.

As the game stalled for half-time, the Rams had pulled slightly ahead, 31-28. In the first five minutes of the second half, the Rams extended their lead, pulling ahead to 39-30. Although the Raiders cut the deficit down to an eight point gap, they were unable to shake Rhode Island’s lead. The team ended the game 11 for 17 from the line and with a 24.2 field goal percentage. 21 of Colgate’s points came from the bench, showing the team’s depth.

On Monday night, the Raiders took an early lead. Scoring in the first minute of play, Colgate broke through the Siena defense, driving up the lane for a series of easy baskets.

The Raiders maintained their advantage as the teams rallied back and forth for the remainder of the first half. Going into halftime, Colgate was up 32-30 thanks to a late layup in the final min­ute of the half by Oaks, who recorded her first double-double of the season with a team-high 19 points and 12 rebounds. The Raiders faltered, however, during the second half, losing their lead and the game. Although the team returned to the floor with a strong start in the second half, by midpoint, the Saints hit their stride, earning a five-point advantage over Colgate. With just six minutes left on the clock, the Saints lead had been extended to 12. Although Colgate fought hard, regaining some ground, they were unable to topple the Saints who won it 66-56. Over the course of the game, Lynch made 11 points and had a game-high four steals.

“I have very high expectations for this team,” Coach Bass commented. “Our seniors have grown tremendously and have dedicated them­selves to the program. They have a sense of ur­gency to make this a great year. In addition, each member of the program has worked hard to im­prove either on the court, with their fitness or in the weight room. We are very competitive, push tempo and create turnovers with our defense. In addition, we have a tremendous battery in Jhazmine Lynch and Tricia Oakes. Jhazmine is one of the quickest guards in the league and Tri­cia is establishing herself as a major post presence. Our ultimate goal is to win a Patriot League Championship. Each game we are working hard to out-focus, out-hustle and out-competeour opponents.”

Colgate will be hosting the New Jer­sey Institute of Technology Highlanders in their home opener at Cotterell Court on Wednesday, November 17. The Highland­ers are currently 0-1 after their season opener against Navy.