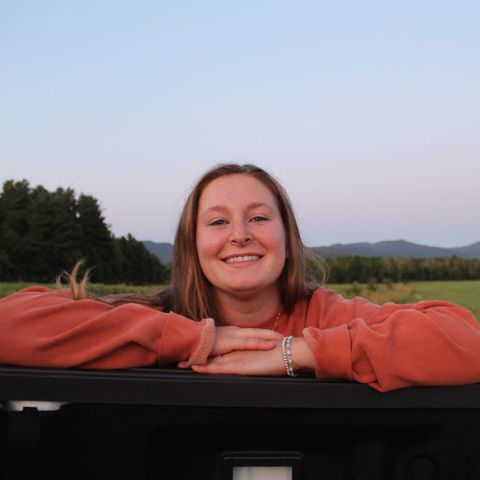 “Let that be on the record. His hair, his love for food — Diners, Drive-ins and Dives kind of raised me. I’ve written to him three times to come to Ray Brothers and he hasn’t responded yet, but that’s okay. One day.”

Bridge’s hometown is ten minutes from campus. Despite her proximity to home, Colgate is a different world for Bridge.

“I was definitely very scared coming in,” she said. “There was underlying resentment knowing that maybe other people don’t have to do as well in school, or try as hard for networking opportunities, because they came from a life of privilege. But, at the end of the day, no, we’re all struggling with our own demons. I had to get over myself a little bit, and then address the fact that yeah, it’s a little uncomfy to be around so much wealth. Other people should be addressing their privilege while at the same time I can address my own. I guess I finally found my place in the middle.”

During her sophomore year, Bridge joined Outdoor Education (OE) and participated in the Century of Camps, a sophomore residential seminar (SRS). With this group, she travelled to Germany and Bosnia and Herzegovina to study internment camps.

“I think Outdoor Ed has been pretty much all fun with a lot of reward,” she said. “SRS was not always the most fun, but it was an amazing group of people and Professor Douglas is amazing. It was really, really hard and coming back from that trip was hard. Figuring out how to deal with that experience and apply it in some way and make it worthwhile has been and still is kind of hard to think about.”

Bridge’s interest in conscientious travel took her to Australia during the fall of her junior year, where she took courses and sought opportunities to learn about uncomfortable histories.

“I went to the site of the Cambodian genocide after my semester in Australia,” she said. “It is good that people are visiting these sites, but then what are they turning around and doing with that information? Are you interacting with that history and then doing nothing to change the way you interact with people in your everyday life? Because there are a lot of lessons to be learned about how you treat other people, and view other people, and, wow, xenophobia is real.”

These adventures have fostered a deep appreciation for ethics in Bridge, who is constantly contextualizing the implications of her experiences as she reflects upon them. As she moves through the world, both at home and abroad, she is concerned about the ways in which her actions affect others. It is a trait she shares with Levin, one of the main characters of the novel Anna Karenina, which she is reading in her Russian Literature class this semester.

“It’s beautiful, I love it,” she said. “I’ve never read anything like it before. There’s so much emphasis on being able to communicate without words and just through glances and movements. It’s so unrealistic — well, maybe it is realistic if we were a little more in tune with our social interactions.”

Bridge is right. Most of the communication in Anna Karenina is subliminal. Even Levin is introspective to a fault, often torturing himself in his attempts to find meaning and direction in his life. Although Anna’s story is the most famous plotline, the novel actually ends with Levin, who finally recognizes that, “I haven’t discovered anything new. I have just found out what I already know. I have understood that power which has not only given me life in the past, but is giving me life now.”

Like Levin, Bridge understands the protracted and hard-won truths that can be gleaned from understanding our position in the middle, whether it’s between comfortable and uncomfortable truths, our hometown and campus, or ourselves and the world. Bridge searches her existing knowledge for answers to new questions, which lends her a rare, immovable certainty in herself, as does her ability to sustain herself with her own observations and translate them into a concrete ethos about the world. Perhaps the true power of Bridge’s indomitable selfhood, as in Levin’s story, is its emphasis on seeing the world in the reflexive, attune to the liminal spaces that constitute a life.