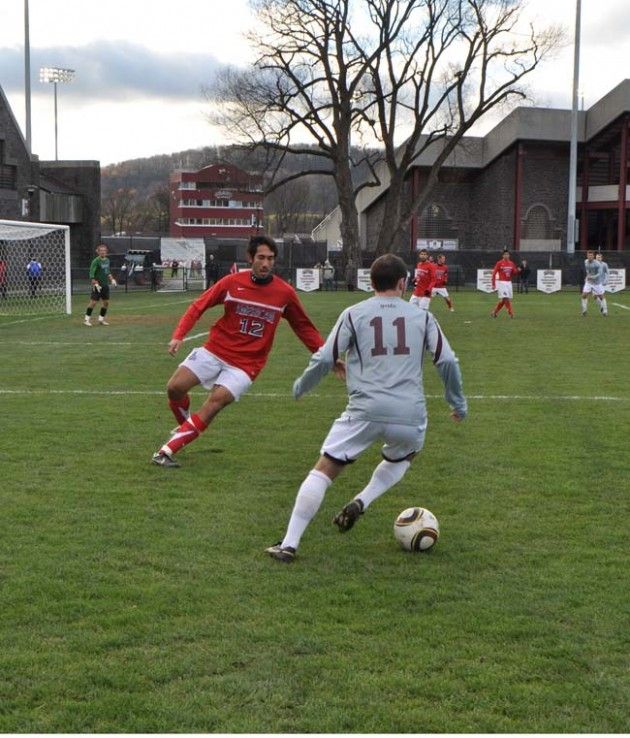 Last Saturday the Colgate men’s soccer team achieved the first of its goals for this sea­son, winning the Patriot League regular sea­son title with a thrilling 1-0 victory over the visiting American University Eagles.

“Obviously there was a lot riding on the American game,” senior captain Jeff Leach said. “Having the ability to host the tourna­ment gives us a distinct advantage because we’ve fared very well on Van Doren. And when we have the ability to control our own desti­ny we always feel very confident in our style of play.”

Neither team pushed the tempo at the beginning of the contest, as they got a feel for each other in this mammoth game. As the half moved on, however, Colgate began to pick up the pressure. The Raiders attacked the Ameri­can goal and registered two shots, but were un­able to score. After weathering a short attack from American, Colgate took the play to the other side of the field again, and this time was able to capitalize. Leach used his superior speed to race down the right side of the field, and as he neared the end line he sent a cross into the middle. The ball fell right to senior forward Steve Miller, who fired a shot to give ‘Gate a 1-0 advantage.

“We have a lot of success when we are able to quickly move the ball around the field, and in that instance our quick style of play exposed American’s back line,” Leach said. “Through a series of good passes we were able to get the necessary goal.”

That lead carried into halftime, and the Raiders continued to put on the pressure coming out into the second half.

“Typically when a team scores a goal you tend to sit back because the other side will pick up the pressure,” Leach said. “We’ve had that problem in the past, but this weekend we did a great job sticking to our original system. This allowed us to absorb pressure and maintain the control of the game.”

As the clock ticked down and Colgate drew closer to the title, American picked up its pace. The Eagles pressured the Raiders all over the field and got a number of dangerous chances on goal. The play of the game, how­ever, was made when junior goalkeeper Chris Miller made a diving, hockey-like save on an American shot, keeping Colgate ahead and ultimately giving his team the victory.

“With so much parity in the Patriot League, every game comes down to that one big play that one team can make to decide a game,” Leach said. “Our defense has been incredibly strong throughout Patriot League play, which is a great testament to our back­line and to Chris, for being able to make that decisive play to win a game. This is critical moving forward, that we can take as much pressure as we can off the backline, but the foundation of our team relies on a strong, cohesive defensive unit.”

As the horn sounded, the Raiders gath­ered at midfield, reveling in their victory but knowing that their work was not done.

“At the beginning of the season we had a variety of goals that we wished to accomplish, and obviously winning a championship was included in those,” Leach said. “However, our most important goal is to extend the season into the NCAA tournament, and although the regular season championship allows us to play on Van Doren, which is ideal, we still need two more wins in order to achieve our ultimate goal of tournament play and beyond.”

Colgate will take the field at home once again this upcoming Friday at 5 p.m. when they take on fourth-seeded Bucknell in the first Patriot League semifinal.

This will be an exciting affair, as Bucknell was the only team that scored off the Raiders throughout the seven games of Patriot League play when the two teams played to a 3-3 tie in Lewisburg, PA.

“We are incredibly excited to play against Bucknell again for a variety of reasons,” Leach said. “One, they essentially ended our season last year, and two, they are the only blemish on our Patriot League schedule. It will be a challenging game, but if we instill our style of play and limit their effectiveness on set pieces we will have great success.”

The winner of that game will face the winner of the Lehigh vs. American game at Tyler’s Field on Sunday at 1 p.m. for the Patriot League Championship and a spot in the NCAA Tournament.