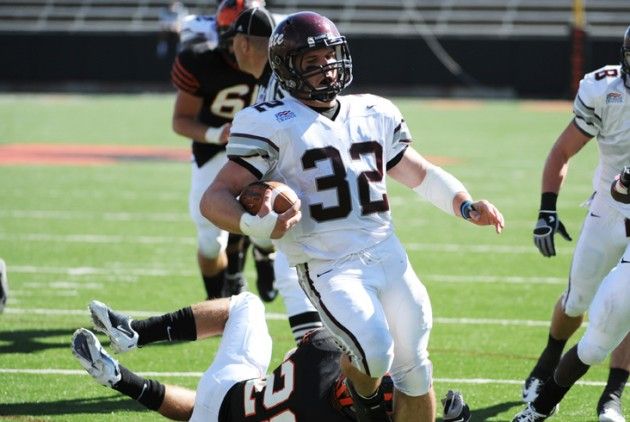 Following its loss to Syracuse, the Colgate football team entered Patriot League play looking to return to winning form, and the Raiders did not disappoint.

A week prior to their matchup against Princeton last Saturday, the Raiders took down Georgetown 34-3 over Homecoming weekend at Andy Kerr Stadium.

Junior running back Nate Eachus carried the ball for 214 yards and four touchdowns on 44 carries and senior quarterback Greg Sullivan added 126 yards through the air in the blowout win. The offense controlled the ball for over 40 minutes, asserting their dominance over the Georgetown defense.

The supposedly struggling ‘Gate defense was very impressive as well, turning in its best performance to date. Colgate forced two turnovers and held the Hoyas offense to a humbling 113 yards.

‘Gate followed its astounding effort with an even better one this past Saturday in an out-of-conference game at Princeton Stadium in New Jersey.

Junior tailback Noah Jackson and Eachus combined for 205 yards and three touchdowns and Sullivan threw for another 205 and two scores and ran for 91 as the Raiders mauled the Tigers 44-10.

While the Raiders’ defense was not quite as dominant as it was against the Hoyas, it held up its side nicely against the Tigers by forcing a fumble and two interceptions. Still, this game did not start out as smoothly.

Princeton’s opening drive was an impressive one as ‘Gate could not prevent the Tigers from consistently moving the ball. The Raiders were able to stall the offense at the 10-yard line, holding Princeton to a field goal and 3-0 lead.

Fortunately for Colgate, the offense responded immediately with a forceful drive of its own, punching it in for six after just five plays and 63 yards.

The Tigers were held in check on their next drive, giving ‘Gate superb field position, but the Raiders could only come away with a field goal and a six-point lead.

Then, after another useless drive by Princeton, the offensive outburst began.

Colgate started the second quarter in Tiger territory. This time, it finished off its seven-play, 61-yard drive with Eachus’ second score of the game, a powerful run from 18 yards out.

After Princeton came back down the field and threatened to cut the lead to six, the defense stepped up. Wide receiver Roman Wilson fumbled, courtesy of senior cornerback Coree Moses, and the Raiders regained possession and momentum.

On the ensuing drive, it was Jackson’s turn to be the playmaker as his 20-yard touchdown run made it 23-3 in favor of the Raiders.

After the running game proved to be successful, Colgate turned to the pass and closed out the scoring in the first half with another overpowering drive. ‘Gate moved the ball 74 yards in only six plays, primarily through the air, and pushed the lead to 27 points. Rosnick was the focal point this time, catching passes of 18 and 39 yards, the latter for a touchdown.

For the second game in a row, Colgate held a large halftime lead and could rely on its potent running attack to use up the clock and nail down a victory. With the way the Raiders were playing on both sides of the ball, Head Coach Dick Biddle had nothing to worry about.

After the ‘Gate defense forced a three-and-out early in the third quarter, the Raiders’ offense utilized its strengths to perfection, moving the ball 86 yards in five minutes for a score. Effective rushing by Jackson and Eachus was complemented by strikes of 15 and 34 yards to Rosnick from Sullivan. The touchdown pushed the lead to 37-3.

As soon as the Tigers got the ball back into Raider territory, the defense responded by forcing another turnover, this time an interception by senior safety Gary Marshall.

When Princeton regained possession at the ‘Gate 36-yard line, the defense held again and the Tigers turned the ball over on downs.

On the ensuing possession, junior quarterback Steve Rizzo capped off the Raiders scoring with a 55-yard touchdown run that made it 44-3. Princeton added on seven with their last drive as Tommy Wornham hit Trey Peacock from two-yards out to cut the final score to 44-10.

This weekend, the Raiders travel to face Upstate rival Cornell, beginning at 12:30 p.m.