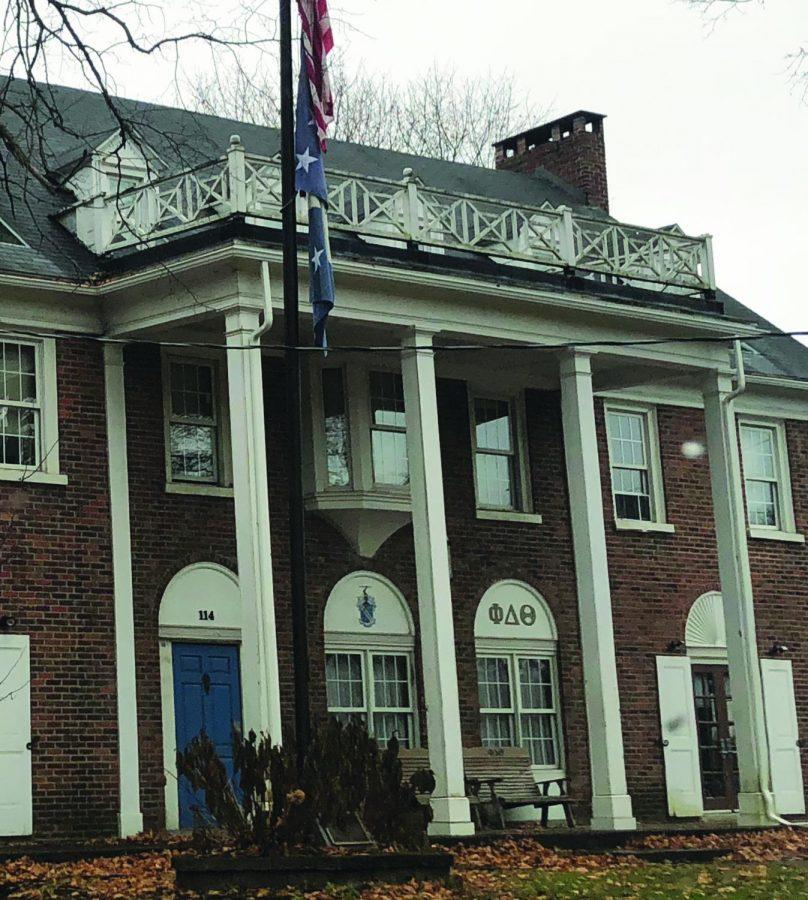 The Student Government Association (SGA) Senate passed a resolution to mandate all Greek Letter Organizations (GLOs) on campus to require new members go through implicit bias training at their weekly meeting Tuesday, November 12. According to the resolution’s author Senator junior Amarachi Iheanyichukwu, the legislation sets the groundwork for the necessity of implicit bias training as part of new member education and the administration’s role in enforcement.

“The resolution starts off with an acknowledgment of the principles GLOs are required to uphold in their operation, the homogenous demographics of the Colgate community and the Senate’s stance on the kind of identity based discrimination that is rampant across campus,” Iheanyichukwu said.

Iheanyichukwu said that the legislation has been a year-long project, which included correspondence with former Assistant Dean of Students and Director of Fraternity and Sorority Advising Tristan Hilpert, former Dean of Students Maria Flores-Mills, Director of Shaw Wellness Katie Griffes and Former Broad Street Liaison Bryce Kuhn. It was then presented at a roundtable with the presidents of all eight fraternities and sororities.

Iheanyichukwu also said she collected information on the current state of diversity and inclusion programs of GLOs.

“I found that of the eight recognized GLOs, only three had diversity and inclusion chairs, and although some showed promise with workshops facilitated by Colgate professors, such workshops were not necessarily attended by all members, or in some cases, were only required by leadership,” Iheanyichukwu said.

Iheanyichukwu said that as a woman of color involved in Greek Life at Colgate, she feels acutely aware of the consequences of implicit biases on campus, spending the last authoring the resolution as a way to further her work on inclusivity.

“Since my freshman year, I’ve always sought ways to combat and dismantle such issues and create a level of cultural competency at Colgate that in turn, fosters a more inclusive and equitable environment for all students. After bearing witness to and being a victim of prejudice based incidents, the implicit bias training as well as this resolution made perfect sense to pursue seeing as GLOs’ predominant whiteness and inherent exclusionary nature unfortunately lend themselves to such problems,” Iheanyichukwu said.

According to the Speaker of the Senate senior Tommy Riccio, the body can pass two types of legislation, bills and resolutions, and that the latter serves as a formal recommendation by the SGA for change to the administration and faculty.

“A senate resolution is a piece of legislation passed by a majority vote in the Senate that strongly urges action from the school by reflecting the will of the student body. Different from a bill, resolutions typically deal with initiatives we do not have the specified power to enact on our own but hope that by reflecting the sentiments of the student body and working with the school, such initiatives can be enacted,” Riccio said. “Once passed we hope that the school takes note and is willing to work with us on the actions specified in the resolution.”

Iheanyichukwu said that when instituted, the training will mimic existing programs on campus facilitated by student leaders.

“The implicit bias training would mimic programs like Yes Means Yes, Colgate Conversation, Safezone, and Bystander Intervention Training, which are typically student led or staff co-facilitated and include a combination of interactive activities, visual aids, active listening, and intergroup dialogue practices. As important information has often been successfully transmitted from peer to peer, the student led aspect is an important part of the training,” Iheanyichukwu said.

Riccio said he felt surprised by the previous lack of protocol for implicit bias training on campus, but looks forward to the prospect of the legislation’s improvement of Greek Life culture.

“I was excited about the idea and was shocked to hear that there is no form of implicit bias training at Colgate whatsoever. I look forward to the implementation of this program as we head into the spring and hope that with all GLOs getting on board that it will create a more accepting Broad Street and campus as a whole that acknowledges and actively works against their implicit biases,” Riccio said.

“We need to be aware of how our biases are impacting who is let into certain Greek Life events, how we are treating people in Greek spaces, and how some people do or do not feel safe in greek spaces. Implicit bias training could make more marginalized groups on campus feel more welcome in Greek spaces and could increase the amount of POC we have in Greek Life,” Klein said.

Iheanyichukwu said she hopes the legislation will create a larger sense of accountability for members of GLOs, and make the Greek Life community on campus more inclusive.

“I hope this resolution will serve as a way to hold members of GLOs accountable for their behavior as there seems to be a general sentiment on Colgate’s campus that perhaps affiliated students are not held to the same expectations as the larger campus,” Iheanyichukwu said. “I hope to see GLOs become safer places for marginalized persons with members who are socially responsible and dedicated to inclusion.”

“I think it’s a step in the right direction in trying to invoke change in the social culture on campus. I hope that the students in these organizations that want Colgate to change for the better will encourage their peers to institute the training and actually care about it,” Middleton said.

Iheanyichukwu said she also sees the resolution as a step in more proactively dealing with issues impacting the student body.

“As the Student Government has often been criticized for being reactionary in addressing problems on this campus, the resolution also stands as a way to be proactive in preventing future discriminatory actions,” Iheanyichukwu said.

According to Riccio, the Senate passed the resolution with minimal hesitation.

“From my perspective the Senate was very encouraged by this resolution and it passed without much doubt. Senators had some questions on the specifications in the bill but overall there was not much of any pushback on the resolution’s core idea,” Riccio said.

Iheanyichukwu said that the legislation’s next steps include presenting an action plan to members of the faculty and administration through SGA governance boards, as well as meeting with the incoming presidents of all GLOs as they transition leadership into the Spring semester.

In the long-term, Iheanyichukwu said she aims to expand the legislation campus-wide.

“Within the next two years, I see the work done with the resolution expanding across   campus with implicit bias trainings becoming mandatory for all student groups,” Iheanyichukwu said.