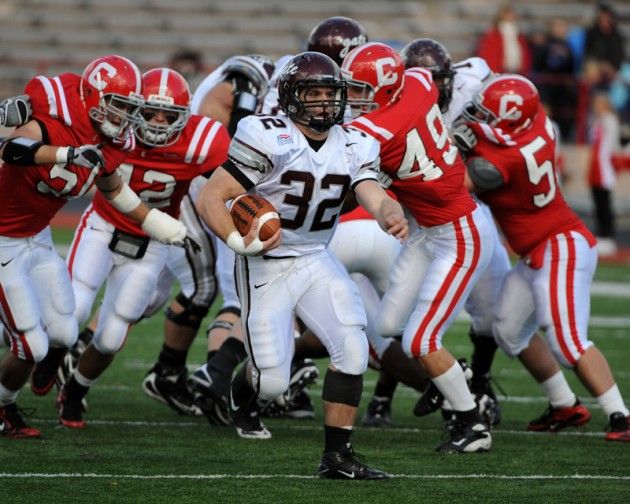 On Saturday, junior running back Nate Eachus set a new school record with 291 yards rushing in Colgate’s 44-3 victory over Cornell, breaking the previous total of 280 yards set by Jamaal Branch in 2003 against Holy Cross. At Schoellkopf Field in Ithaca, Eachus and senior quarterback Greg Sul­livan each rushed for three touchdowns. Thanks to a powerful offense and stifling defense, the Colgate football team’s recent streak of plundering and pillaging contin­ued as the Raiders locked up program win number 600.

“Nate [Eachus] has had a good year and he’s a great running back,” Head Coach Dick Biddle said. “We’re pretty multi-di­mensional offensively and I thought our offensive line did a really good job today. I just think it was a great effort by them, our quarterback, our receivers blocking downfield and obviously by Nate.”

‘Gate defense posted seven sacks, hold­ing Cornell scoreless until a field goal with 5:58 left in the third quarter. As for the of­fense, it was clear from the beginning that the Raiders could move down the field at will. ‘Gate racked up 440 yards rushing, primarily from Eachus and Sullivan. On the historic day, Raider defense held the Big Red to just 32 yards rushing and 124 total yards.

From the very first play of the game, the Raiders (4-2) knew they had a lot to look forward to, as Eachus broke off on a 25-yard run. Even though Colgate did not score on its first possession, that run set the tone for the rest of the game.

After forcing a three-and-out from Cornell (1-4), Colgate moved into the red zone before settling for a 30-yard field goal from sophomore Evan Colborne to go up 3-0. The lead built from there, and the Raiders never looked back.

A few possessions later, Sullivan orches­trated a seven-play, 72-yard drive, finish­ing with a 33-yard completion to senior Doug Rosnick and a touchdown score from 26-yards out by the quarterback.

After yet another great series from the defense, highlighted by tackles from sophomore linebacker Patrick Friel, the running game kicked into another gear. Eachus broke through the Big Red lines for a massive 66-yard rush and a touch­down, his first on the day and the longest run of his career.

The next drive did not disappoint as Sullivan took his turn for a big running play, scoring from his own 47-yard line to put the Raiders up 24-0.

The other side of the ball was not too shabby either, with the Big Red unable to respond offensively. Cornell quarterback Jeff Mathews was sacked by sophomore lineman Tyler Danielsen on their next pos­session, which caused a fumble that was re­covered by Raider senior linebacker Chris DiMassa at Cornell’s 27–yard line.

With great field position, it was only a matter of time before Sullivan or Eachus punched it in. Sure enough, Eachus ran in for the touchdown two plays later from 25 yards out and ‘Gate went into halftime with a commanding 31-0 lead.

The Raider defense held the Big Red to a measly 61 yards in the first half, while the offense gained a staggering 320 yards.

Somehow, Cornell began to gain some mo­mentum to start the second half after holding Colgate to back-to-back punts and knocking in a field goal from 36-yards out to make it 31-3.

The Big Red offense was drove again on its next possession. The shift, however, ended just as quickly as it began when senior Brad Keele intercepted a Mathews pass at the Colgate 16-yard line, returning it to the 32. Two plays later, Eachus busted out a 63-yard run for a score, his third of the game, and the Raiders took back control and went up 38–3.

Eachus and Sullivan led the Raiders 78 yards in five plays on their next series, as both players contributed with more big plays. From his own 29-yard line, Eachus ran the ball down to the Cornell 17. Sullivan capped off the drive with a score from 11 yards out to make it 44-3 before Colborne’s extra point was blocked.

That score would hold up to be the fi­nal. Cornell’s offense could not manage more than eight yards on its remaining possessions against the incredible play of the Colgate de­fense, led by senior Chris DiMassa and his career-high 12 tackles.

“We’ve had some starters hurt but young guys and older guys have stepped up and made a lot of plays,” Coach Biddle said. “The coaches have done a great job and I think a lot of it goes back to where we hung in there with Syracuse in a lot of places and our players understood they could play with people up front … the guys understand what they have to do to play team defense. Sometimes your offense struggles but if you’re playing good defense consistently you’ve got a chance to win and that’s what we’re doing right now.”

This game marked the third week in a row that the Raider defense has held opponents to ten points or less. With outstanding play on both sides of the ball, the Raiders are going to be tough to beat from here on out.

Colgate will next take the gridiron when it hosts the defending Patriot League Cham­pions, Holy Cross, this upcoming Satur­day. The game is slated for a 1 p.m. start at Andy Kerr Stadium.