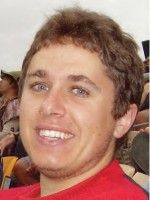 After a year-long fight with an in­operable brain tumor, Kevin Bradley Williams passed away on October 4, 2010. He was 22 years old. Kevin leaves behind his fiancée Kathlin Ramsdell, also class of 2010, his parents and sister. Originally from Aptos, California, Williams excelled in academics and athletics at Col­gate. He double majored in geology and geography and was on track to graduate with honors. He was the captain of Colgate’s men’s club wa­ter polo team and skiied for the Al­pine Club. Williams was known by friends for his humor, intelligence and genuine personality.

“During my four years at Col­gate I was lucky enough to be ex­tremely close with Kevin. As an in­tegral part of the water polo team, Kevin was always fun-loving, dili­gent and full of life. I know I speak on behalf of the entire team when I say that we are extremely thank­ful for the time we got to spend with such an amazing person. What he and his fiancée Kathlin accomplished was nothing short of incredible,” Williams’ classmate Adam Weisbarth said.

Williams’s friend and water polo teammate junior Chip Mol­ten shared, “Kevin immediately struck me as one of the most friendly and easily approachable people I have ever met. It was truly a pleasure to have had him in my life. He taught me the importance of loving and appreciating life. From a teammate to a classmate to a friend, there was nothing Kevin was involved in on which he wasn’t a positive influence. He was and is loved by everyone, and will be sorely missed.”

Kevin touched many lives at Col­gate including peers, teammates, teach­ers and friends. He outlasted doctors’ survival estimates and lived about a year after the tumor was diagnosed. May Kevin live on in our memories and may his story inspire us all to fight to the end in even the most dire of circumstances.