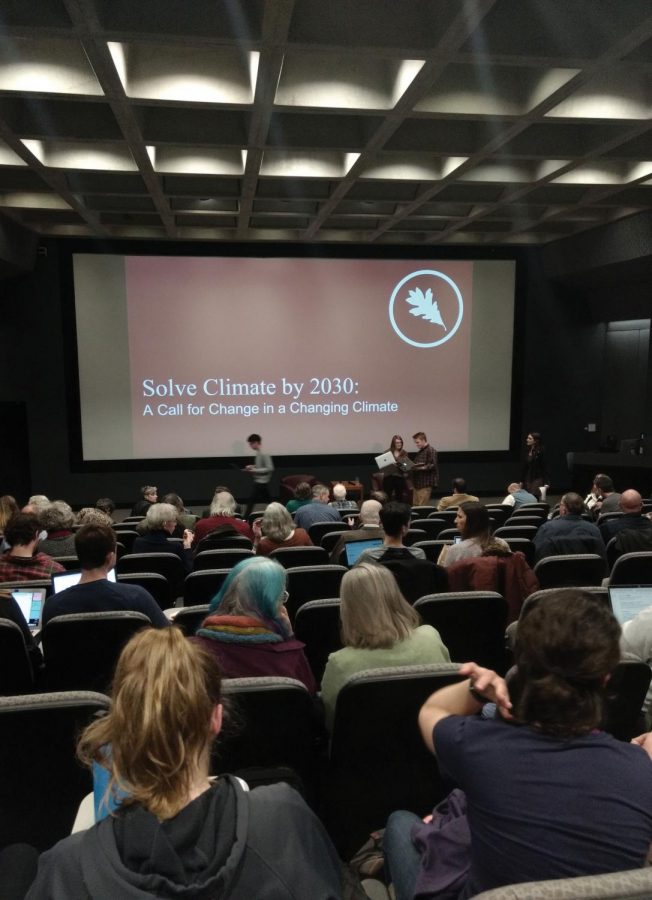 The Office of Sustainability panel, “Solve Climate by 2030: A Call for Change in Changing Climate,” was held at Golden Auditorium in Little Hall on November 7. The panel was moderated by senior Cecilia Kane, an intern for the Office of Sustainability. Panelists included the Executive Director at the American Association of Geographers Gary Langham, Assistant Director at the Office of Climate Change NYS DEC Mark Lowery, Assistant Professor of Environmental Studies at Hamilton College Aaron Strong, Associate Professor of Renewable Energy at SUNY Morrisville Phil Hofmeyer, and Village of Hamilton Mayor RuthAnn Loveless. The event was co-sponsored by the Madison County: Call to Action, the Hamilton Climate Preparedness Working Group, Colgate’s Environment Studies Program and the Office of Sustainability at Colgate University.

Panelists outlined details of the legislation, with a focus on the role of community involvement in taking major strides towards a carbon-neutral New York State. Langham began by saying that while government action will be required to enact large-scale change, community organizations and academic institutions such as Colgate must actively work on the issue in order to reach the expectations of legislation.

The event was held in response to New York State passing the Climate Leadership and Communities Protection Act (CLCPA), the nation’s most comprehensive climate legislation.

The CLCPA outlines major goals, including reaching at least a 40 percent reduction in climate pollution, zero-carbon electricity by 2040 and net-zero emissions by 2050. According to the panelists, reaching a 40 percent reduction by 2030 will require the electrification of cars and heating, deep penetration of renewable energy sources, waste diversion of organics and embedded emissions, conversion of refrigerants and deep energy efficiency improvements in all sectors.

Director of Sustainability John Pumilio  said this legislation will not be effectual without, “major structural, cultural, and societal shifts.” He shared his expectations considering Colgate’s role in this process.

“We are going to have to amplify our deployment of renewable energy systems [including transmission lines] if we are to meet our mandates,” Pumilo said.

Office of Sustainability Intern senior Miller Ward said that despite the magnitude of necessary work, he feels optimistic about the panel and its emphasis on the social will of communities in this process.

“The speakers all cautioned that achieving the goal would not be an easy feat, but it is entirely possible. One of the speakers even mentioned that all it takes is five calls from different constituents for a senator or representative to investigate an issue,” Ward said.

Sophomore Gabrielle Sorresso said she found the panel to be informative and encouraging. She shared her excitement about being a part of Colgate’s impact on reducing the carbon footprint of New York State.

“[I’m proud to spend my college years] in a state that is actively seeking to fight against the climate crisis,” Sorresso said.