Changing the Nature of Football 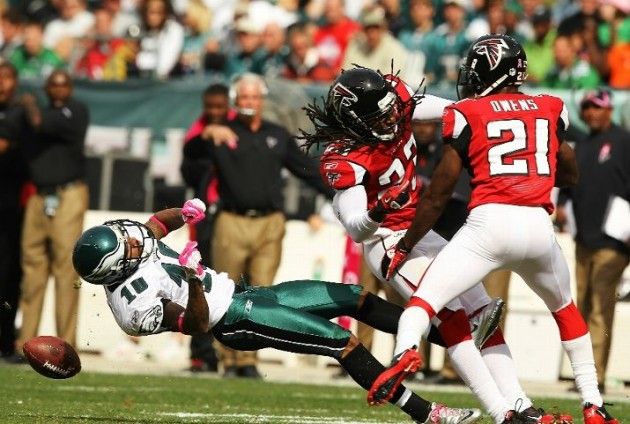 If you happened to be watching a little bit of football over the past couple weeks, you probably noticed an increasing (and increasingly alarming) trend occurring in both professional and college stadiums – that is, more and more players being car­ried, carted and stretchered off the field af­ter sustaining injuries caused by hits to the head. One play in particular, Atlanta Fal­cons cornerback Dunta Robinson’s hit on Eagles wide-receiver DeSean Jackson, made all the headlines on Sunday, as it left both players with concussions and was a disturb­ing thing to watch. In another game, two players from the same team were helped off of the field after being momentarily knocked unconscious by helmet-to-helmet hits. Both players, Browns’ wide receivers Mohamed Massaquoi and Joshua Cribbs, were hit by the same opponent, Steelers linebacker James Harrison, a player who has been repeatedly fined for late-hits and roughing the passer infractions.

But this is not about Robinson or Har­rison, at least not only about them, and I am in no way trying to spark a witch hunt against them. I’ll even ignore the fact that after the game against the Browns, Harrison was quoted as saying, “I try to hurt people.” This is about the fact that something needs to be done to protect the players on the field and stop these kinds of hits. And please don’t get me wrong, I love a huge hit. There is absolutely nothing like it. Watching Reg­gie Bush crawl off the field after Sheldon Brown lights him up is one of my favorite things to do when I’m bored. But something is clearly wrong when five or six players have to leave games and be helped off the field ev­ery week with concussions because some six-foot, 242-pound wall of a man ran full speed for ten yards before smacking his helmet directly into theirs while they were looking the other way.

The big question is, of course, how the NFL can stop these kinds of hits without hurting their product, which, oh by the way, is probably at its highest level of popularity in a long, long time. A small minority have sug­gested making the fields bigger, which would simply space everything out and decrease the amount of split-second plays where of­fensive and defensive players crash into each other without both parties being aware of the imminent collision. Although that sounds kind of fun, the chances of something like that being approved are so slim that it really isn’t even a possibility. There is no way the NFL would take such a huge gamble when the game is this popular and successful as a business. Plus, Andre Johnson would prob­ably average 250 yards and 4 TDs a game on a bigger field, so that would be kind of crazy.

Another solution is to increase the fines for helmet-to-helmet hits. The problem with this is that, for most players, whatever fine the NFL hands down to them is chump-change. When Ochocinco (then Chad John­son) holds a sign that reads “Dear NFL, PLEASE don’t fine me AGAIN!!!” after scor­ing a touchdown, knowing perfectly well that he is going to get fined for it, something is clearly wrong.

I understand Ochocinco isn’t “most players,” but I just don’t see 20, 30, even 40,000-dollar fines having that much of an effect on defensive players, especially when the game is on the line and they have to separate ball from offensive player.

This is really where the issue lies. The mentality of the game, or at least part of the mentality of the game, has to be changed. As scary as that sounds, as much as we don’t want to see our perfect NFL messed with, it has to be done, and that is why the NFL is going in the right direction by threatening to hand out suspensions for helmet-to-helmet hits. Realistically, it is the only way to fix this problem. James Harrison, you want to lead with your helmet when you’re tackling guys on Sunday? You want to see how many players you can have carted off the field with head and neck injuries? That’s cool, but first why don’t you hold onto this four-game sus­pension for me. Let’s see how happy people back in Pittsburgh will be when your team loses a few games because you’re not playing.

Again, I want to make this very clear, I love a big hit just as much as the next guy. And I understand that hitting is a part of football, that it’s probably the best part. I also realized long ago that football is a pretty messed up game, that sometimes it borders on the insane, that people are literally trying to kill each other out there. Just this Satur­day, Eric LeGrand, a defensive tackle for Rut­gers University, was paralyzed from the neck down on a play where he made the tackle. Something like that just makes you stop for a second, and think about what exactly we are talking about.

Football, after all, is a game, it’s entertain­ment. What isn’t entertaining, on the other hand, is seeing a guy being carted off the field knowing he probably will never walk again. What is also not too entertaining is reading about the fact that concussions lead to brain disease and dementia. I’m not even going to pretend like I’m sure what demen­tia is, but I think it has something to do with losing touch with reality, with delusions and loss of memory and cognitive abilities. That doesn’t sound too fun at all.

So as far as I’m concerned, the NFL handing out two-game, three-game, even four-game suspensions is fine with me. If players don’t want to cost their teams games, if they want to keep their jobs in the league, they need to find other ways of making plays on the ball. Ways that don’t involve jump­ing head-first into another man to make a tackle, ways that don’t involve jeopardizing another man’s ability to speak properly or remember his childhood.