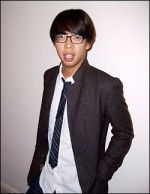 Rattawut Lapcharoensap, author of a collection of short stories titled Sightseeing, visited Colgate on Thursday, September 30. He gave a reading from newer works in the Persson Auditorium. Lapcharoensap came as part of the English department’s Living Writers course. Every semester, as a part of the course, ten acclaimed writers are invited to Colgate to offer public readings and to meet personally with students reading their works. The lecture series is also available on Livestream through the Colgate website.

Lapcharoensap’s age and nationality make him a particularly interesting character. Published five years ago when he was only 25, Sightseeing won the Asian American Literary Award and led Lapcharoensap to be chosen for the National Book Foundation’s inaugural “5 Under 35” program. In 2007, he was on Granta magazine’s list of Best Young American Novelists.

Born in Chicago and raised in Bangkok, Thailand, his perspective is thoroughly bi-cultural. At Colgate, he read from a new piece, a story about life in the ’90s, and though the specifics focused on his Bangkok home. His descriptions and humor also spoke to the audience of predominantly American students and professors.

“I thought the story was really great. This was the reading I enjoyed most so far,” Olive B. O’Connor Fellow Jasmine Bailey said. “I also think that having read the stories this was better; the voice was somewhat improved—the sarcasm came off better.”

His Thai nationality struck a chord with one student in particular.

“I think that it’s amazing that there’s finally a Thai American speaker on campus. Not only that, but most of the Asian American writers we’re familiar with have been Chinese American and Japanese American. It’s nice to have a voice that speaks for the Thai community on a local level and a global level as well,” senior Pooh Suwanrut, a Thai-American, said.

The event opened up with desserts and goodies in the hallway, including fresh fruit and hot apple crumble. Next, after a raving introduction, the author gave his reading. His excerpt balanced comedy and sarcasm with the deep and the serious. He had the audience behind him as he suggested, “The future was everywhere in the ’90s, and we were constantly reminded of it” and went on to tease, “In the ’90s, we learned to sh*t sitting down, wipe our anuses with toilet paper.”

The question-and-answer period began with a question about what being fully bicultural is like for him.

“Am I? On my better days maybe…” Lapcharoensap said. “One of the advantages, as a writer, is that what seems normal in one country is completely foreign in another. And one of the challenges as a writer is to make the familiar seem strange. […] So as a writer, I find it useful. As a human being, I think it’s confusing.”

Following the talk, a representative from the bookstore sold copies of Sightseeing and Lapcharoensap stayed to sign autographs for a line that snaked at least once around the basement lobby of Persson Hall.

The Living Writers course was the brainchild of Frederick Busch, former Colgate professor and author of more than 20 novels. This year it is being taught by Thomas A. Bartlett Chair and Professor of English and Chair of the English Department Jane Pinchin and Associate Professor of English Jennifer Brice.

“I thought it was a fabulous reading,” Brice said. “[Lapcharoensap] is good friends with Patrick O’Keeffe, a fiction writer who taught here. He gave me a copy of Sightseeing, and I’ve been dying, ever since then, to meet him.”

“It’s really generous of him to come here,” Brice added, as Lapcharoensap is currently an Eminent Visiting Writer at the University of Wyoming. “Besides coming all the way from Laramie, Wyoming, his partner just had a baby three weeks ago and this is the first time he’s left home since then.”

Despite being greeted with some dismal Hamilton weather, Lapcharoensap seemed happy to be here as well.

“It’s really good to be back in this part of the country, I really miss it since my undergraduate days,” Lapcharoensap said. “And of course, in true style, it’s pouring rain.”