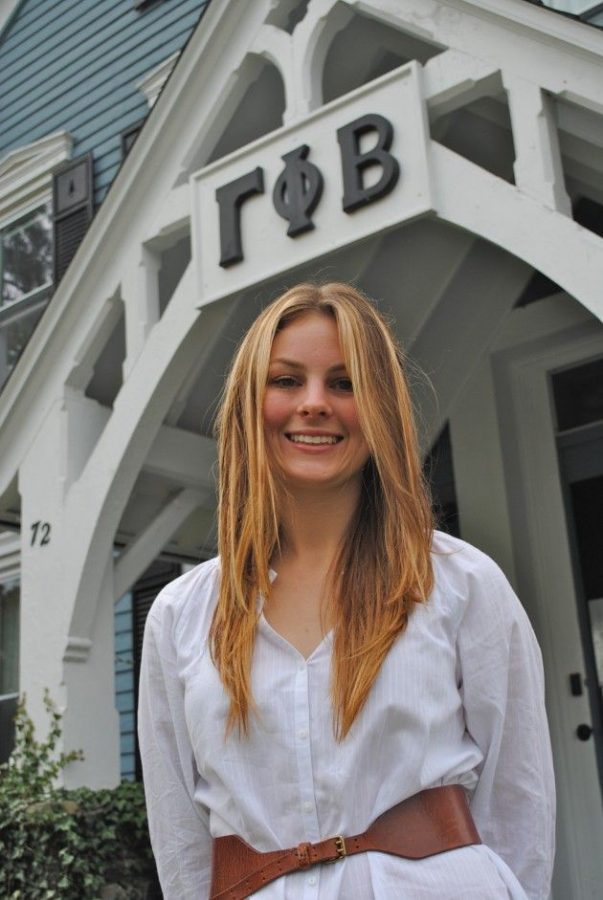 When President of Gamma Phi Beta senior Julie Wallan stepped onto the Colgate campus fresh from Los Angeles, California her first-year, it was almost unimaginable that three years down the road she would be the acting president of a sorority.

“My first year I didn’t do anything because I was transition­ing,” Wallan said, noting how she had to ease into involvement at Colgate.

However, this Geology major always had Greek Life in the back of her head. As the daughter of two parents who participated in Greek Life in college, Wallan gradually began to seek out opportunities for philanthropy on campus. As a sophomore, she joined the Student Philanthropy Council and also became a member of Gamma Phi Beta.

Wallan notes that while she received offers from more than one Greek organization, she felt that Gamma Phi Beta was truly the best fit.

“I picked Gamma Phi over another organization because I felt it was the most sorority-like,” Wallan said, reflecting on the organizations high academic standards and national goals. She further added, “It reflects the most of what my parents were a part of at a bigger school.”

In addition to these features, Wallan also notes how she was drawn to the members of the sorority itself. She says that she felt the other Gamma Phi Beta members would “make her the best person [she] could possibly be.”

“I think it’s really unique that we donate to a camp that is 20 minutes away, instead of donating to a national organization where you don’t see the benefits,” Wallan said.

She further emphasized how donating to Madison County Children’s Camp makes it easier to see the impact of Gamma Phi Beta’s efforts. Wallan notes that each year, the donations made by her sorority provide funding for 13 additional girls to attend the camp.

When asked about changes to the Greek system at Colgate, Wallan offered a rather optimistic outlook.

“I think Colgate is the most perfect place in the world,” Wallan described, citing the benefits of attending a small liberal arts institution. “Within that, you can’t dramatically change the way Greek Life is,” she added.

However, Gamma Phi Beta is nonetheless committed to improving Greek life at Colgate. Wallan notes how the or­ganization has dedicated itself to “developing transparency” between Gamma Phi Beta and the administration. The re­sults of these efforts have started to become apparent, as Wal­lan describes the improvement to communications between Greek organizations and administrators.

As Wallan finishes up her year long tenure as the Presi­dent of Gamma Phi Beta, the organization will be losing a great asset in terms of leadership. Yet, based on the glow­ing portrait that Wallan paints of her sorority sisters, there will undoubtedly be another equally qualified and talented young woman to assume the presidential responsibilities.