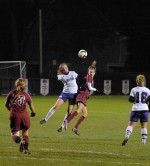 Last weekend, the Colgate women’s soccer team took the field at home for the last two times this season. On Friday, the Raiders took on Patriot League foe Holy Cross, blanking the Crusaders by a score of 2-0. Two days later, Colgate took the field for Senior Day, tying with the Army Black Knights, 0-0.

By defeating Holy Cross, the Raiders gave themselves a winning record in Patriot League play after losing their first two league games, ex­tending their mark within the division to 3-2. Scoring opened in the 31st minute, when soph­omore Sarah Henderson sent a beautiful cross over to fellow sophomore Alyssa Manoogian, who then headed the ball perfectly to senior co-captain Calista Victor. Victor took the header from Manoogian and volleyed it accurately beyond the reach of Holy Cross goalkeeper Mary Ferketic. In the remaining 15 min­utes of the first half, Colgate’s offense slowed slightly, failing to tally another goal before the break in the action, while still keeping pressure on the Crusaders.

The second half started off slowly for the Raiders, but in the 67th minute the team struck again. Manoogian picked up her second assist on the day, hitting sophomore forward Jillian Kinter in stride, who then struck a perfect ball past the goalkeeper. It was Kinter’s third goal in her past two contests. Even though it was com­fortable for the Raiders to play with a two-goal cushion, one goal would have been plenty for Colgate, as sophomore keeper Alexis Longwell stymied the Holy Cross offense. Longwell made four saves and shut out the Crusaders, thanks in part to a suffocating Colgate defense. Despite getting ten shots off, the Crusaders were only able to put four of those on target.

“On Friday, we played good team defense and were able to capitalize on our offensive opportunities,” Victor said.

On Sunday, the Raiders honored seniors Victor, Anna Baldwin, Kiki Koroshetz, Callie Brazil and Kaitlin Whalen, in what would be the final home game of their careers. In the first half of the scoreless draw, the battle was evenly fought. For a significant portion of the period there were no legitimate threats, until Army fired a shot that was deflected out of harm’s way by Longwell. Longwell kept the Raid­ers in the game for all 110 minutes, amassing five saves en route to her second shutout of the weekend. Colgate received an opportunity of its own after the goal- scoring threat by Army, yet failed to capitalize as Baldwin ripped a shot that bounced off the crossbar and back into the playing field. For the remaining few minutes of the half, the Black Knights were able to keep the offensive pressure on Colgate, firing another shot on target, but they did not come away with a goal to show for it.

In the second half, the Black Knights kept the pressure on the Raiders, rarely playing the ball in their own end. Despite the offensive pres­sure, the Raider defense held strong – bending, but certainly not breaking. Army ripped three more shots that were handled well by Longwell, and the Colgate back line prevented Army from seeing many promising opportunities.

Since the match had not been decided fol­lowing 90 minutes of play, the two teams stepped back on the field for two ten-minute overtime periods. The first overtime period was fairly evenly matched, and although the Raiders were unable to seriously challenge the goalkeep­er. Even still, Colgate nearly scored when junior defender Danielle Wessler placed a low shot just beyond the reach of the Army keeper that skipped by the far post of the Black Knights’ net. Colgate’s stingy defense held off another aggressive Army offensive attack in the second overtime period, and the final whistle blew with the game ending in a draw. It was the team’s first draw of the season.

“We need to continue to work on attacking in the final third,” Victor said. “Our movement of the ball could be better and we need to start taking more shots.”

The Raiders will take the field again on October 30 when they travel to Lewisburg, Pennsylvania to face off against Patriot League rival Bucknell at 4 p.m.

“In preparation for Bucknell, we will be working on attacking in the final third, taking shots and set pieces,” Victor said.

A victory will secure Colgate a spot in the upcoming Patriot League tournament.