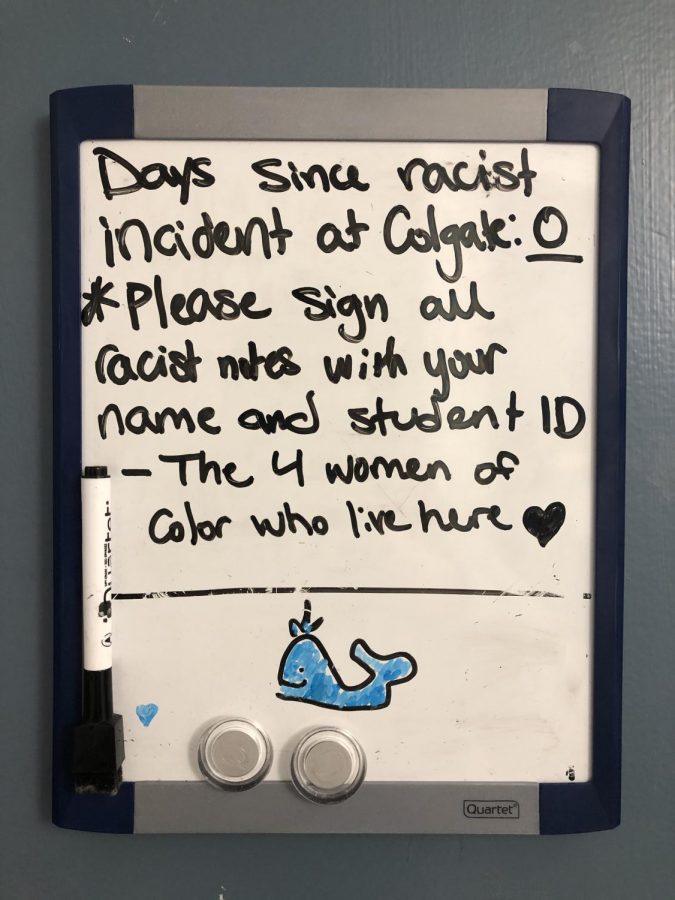 The response written by the residents of the room targeted by a racist message. The whiteboard reads: "Days since racist incident at Colgate: 0. Please sign all racist notes with your name and student ID [signed] The 4 women of color who live here."

A racist message written on the whiteboard outside a suite in Russell House, a first-year and sophomore residence in the Bryan Complex, was reported to Campus Safety late in the evening on Tuesday, October 29, according to Associate Vice President for Campus Safety Daniel Gough. The message read, “is a [F-word] [N-word]” following sophomore Kyla Waring’s name, one of the residents of the room. The whiteboard had been on the floor next to the door of the residence prior to the racist message being written, according to the residents of the impacted suite.

Sophomore Flora Zhang, a resident of the suite, said she first saw the racist message sometime over the weekend prior to the residents of the suite collectively reporting the incident. Zhang said she needed time to consider how to move forward and share the information with her suitemates.

“I could have acted sooner, but I was just confused. I didn’t want to believe it. Stuff like this happens all the time. It’s not like we don’t see it, it’s just that it’s almost become normalized in a way,” Zhang said.

Waring said she and her suitemates felt it was important to alert the student body of the incident immediately via social media, before a formal investigation went underway.

“We’re not going to let this get pushed under the rug,” Waring said. “That was pretty much our biggest fear.”

Sophomore Cecilia Vu, another resident of the suite targeted by the racist message, said her initial reaction was disbelief.

“I couldn’t process it properly,” Vu said. “I just sat there and kept thinking, ‘Is this really happening?’”

The residents of the suite erased the message Tuesday evening and wrote in response, “Days since racist incident at Colgate: 0. Please sign all racist notes with your name and student ID. [Signed] The 4 women of color who live here.”

“It felt a little bit like reclaiming our white board,” Waring said.

The full suite became aware of the incident on Tuesday evening. Sophomore Precious Odiase, a resident of the suite, took a photo of the racist message before erasing the whiteboard. The residents of the suite took action Tuesday evening, sharing the photo of the racist message and alerting the cultural groups on campus via email and the people of color (POC) community via GroupMe. The residents also contacted their Community Leader (CL) and filed a Campus Safety report Tuesday evening through Colgate’s online report forum as a “Bias, Discrimination, and/or Harassment Incident.”

According to Gough, Campus Safety received the report close to midnight on Tuesday evening, beginning investigative action upon their arrival to work on Wednesday. Gough is co-leading the Campus Safety investigation with Assistant Director for Investigations Val Brogan, and said the investigation is ongoing.

“[The report] came through a bias discrimination and or harassment online forum and that was submitted through the online…reporting system,” Gough said. “Cases like this are typically heavily reliant on students coming forward with information or someone coming forward to admit responsibility.”

Gough explained that if someone were to come forward in accepting responsibility or if he receives information pertinent to the community, he would inform the campus in a timely manner.

“I would do that probably in the 24 hours following that [report], after we could get supporting documentation and do our appropriate due diligence for verification and confirmation,” Gough said. “If we have no updates, I’ll certainly inform the campus community of that too at some point in time that makes sense.”

Gough said that the current investigation is the most similar to that surrounding the racial slur written on the door of an international Chinese student in March of 2018. The person responsible was not identified.

Gough explained that in the past ten years, there has only been one event other than the 2018 racial slur that meets the definition of the Clery Act, a forcible sex offence that occured in 2014. The Clery Act is a 1990 legislation which “aims to provide transparency around campus crime policy and statistics,” according to the Clery Center.

Gough said he encourages anyone with information to report through their anonymous tip form found on the University’s website, by calling 315-228-7333 or emailing [email protected]

According to Colgate Dean for Administrative Advising and Student Conduct Kim Taylor, Colgate’s Equity Grievance Policy (EGP) covers incidents of bias, harassment and discrimination, which is what the whiteboard incident was reported as.

“The use of hate speech falls under the EGP definition of harassment. When directed at a specific individual, as seems to be the case here, this would also be a violation of the Code of Student Conduct. Regarding possible consequences, the case would be adjudicated per the EGP process. Under this process, sanctions can range from reprimand to suspension or expulsion,” Taylor said.

Taylor said that if a guilty party were to be found in the Campus Safety investigation, the University’s communication of these results is limited under federal law.

“Sanctions are informed by the particulars of the case as determined by the (EGP) process. The University’s ability to disclose the results of disciplinary proceedings is subject to limitations under federal privacy law,” Taylor said.

Though an investigation into who wrote the racist slur is underway, Zhang said she feels addressing the systemic issue of racism on campus is much more important than finding the party responsible for the message on her suite’s whiteboard.

“It’s not at the forefront of my mind that this person is caught, because it’s not just one person. This isn’t just an isolated incident; this is a systemic issue,” Zhang said.

“As our community faces this display of intolerance, we must come together in support of one another, in support of the Colgate values that unite us, and in solidarity against any voice of hatred and ignorance,” McLoughlin said. “Achieving an inclusive campus requires all of us to stand up and speak out against any act, or inaction, that seeks to divide our community.”

Waring said that while she recognizes many students are frustrated by the lack of transparency in the administration’s communication about the incident, she understands the administration’s actions ensured the safety of herself and her suitemates while they decided whether they would publicly reveal themselves.

“I think that personally, there were some questions brought up about the dissemination of the news and… how the emails weren’t specific,” Waring said. “I understand the frustration with that, but I also know that it was like that for our protection.”

President Brian Casey and Dean of the Faculty Tracy Hucks released the Diversity, Equity and Inclusion plan (DEI) on Wednesday, October 30, created to expand upon the University’s Third Century plan. According to Casey, the release of the DEI Plan was long-scheduled for October 30, not as a response measure to the racial incident. Casey addressed the racial incident at the start of the SGA Town Hall event in the Hall of Presidents on Wednesday, October 30. The Town Hall was centered around the Third Century Plan and answering student questions.

The Town Hall concluded early to allow for event to transition to the SGA organized speak-out in response to the whiteboard incident. More than 200 students, faculty and staff attended the three-hour event which allowed community members to share their experiences and feelings in response to the incident. Hucks addressed the students in attendance.

“We look forward to hearing your thoughts, but want you to hear collectively from administrators and from staff and from faculty, who are here, that we support you, that we do not tolerate this, and we will do all we can to make sure that Colgate will continue to be a space where diversity, equity and inclusion are not just reactionary principles, but they’re foundational principles to who we are in the Third Century,” Hucks said.

The Department of Women’s Studies organized an event on October 31 as a follow-up to the speakout to discuss gendered racism and misogyny on campus. Entitled “Breathe: Accountability for Gendered forms of Racism and Misogynoir on Campus,” the event took place in the Center for Women’s Studies, under East Hall from 6 to 8 p.m. According to The Guardian, misogynoir describes “the particular brand of hatred directed at black women in American visual and popular culture.” Program Coordinator for the Center for Women’s Studies Odette Marie Rodriguez, A. Lindsay O’Connor Chair of American Institutions Dominique Hill and Associate Professor of Peace and Conflict Studies and Director of Women’s Studies Susan Thompson organized the event.

Rodriguez said attendance fluctuated, with up to 90 students present at one point, along with a few members of the faculty. Rodriquez, Thompson and Hill, closed the event by offering themselves as support systems and the Center for Women’s Studies as a place for action.

“I [hope students] look deeply into student activism of the past. There’s a framework in place for how others have done it,” Rodriguez said.

Rodriguez said she wants to see restructuring from the University in response.

“I think it’s a whole structural issue of rethinking what it means to be a university and who we are taking our cues from,” Rodrgiuez said. “That’s a big ask for the university to undergo, but that’s what needs to happen.”

Interim Director of the Africana, Latin, Asian and Native American Cultural Center (ALANA) and Director of LGBTQ+ Initiatives Tiffany Lane said she feels Colgate students are strong and resistant, but it is upsetting for her to watch them deal with incidents like these.

“It’s just really upsetting that we still have this going on,” Lane said. “There’s no other way to describe other than it’s just pure hurt… these are real words that people still use to this day to bring people down—there’s pain behind this. I want [the person responsible] to understand that.”

Zhang reflected on how the incident impacts they way she feels about her place on campus.

“I just think that being a person of color here on campus, especially someone who’s first [generation], coming to college is tough. But then when you come to college and don’t see anyone around you who looks like you, that’s even harder. That’s something that I struggled with my first year—this imposter syndrome,” Zhang said. “I struggled a lot with building a home for myself here, and I’ve been lucky enough to find great people… but when something like this happens, you can’t help but start to feel you’re back at square one again, like you lost that safe space.”