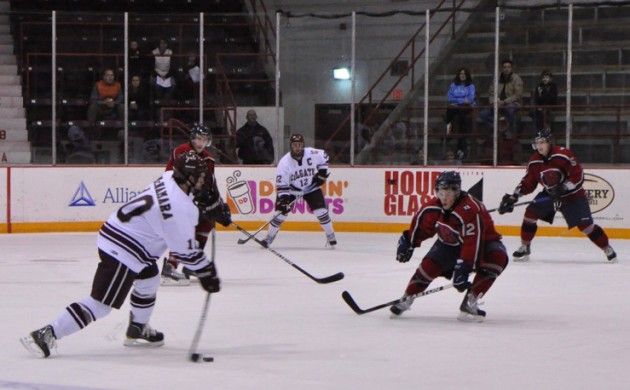 Last Saturday the Colgate men’s hockey team hosted the Brock University Badgers, a Canadian university from St. Catherine’s, On­tario for an exhibition tilt in its unofficial home opener. The Raiders took home the victory by a score of 3-2. Junior goaltender Bryan Bessette saw two periods of action in which he stopped 15 out of 17 shots faced, while first-year Eric Mihalik protected the net in the third period, stopping all eight shots he faced. First-year for­ward Mike McCann scored his second goal in as many games, while junior assistant captain Kevin McNamara scored the game-winning goal for Colgate.

“I was only trying to get the puck on net, so it felt good when I saw that it beat the goalie,” McNamara said. “It’s always special playing at home, and we appreciate the support.”

‘Gate suffered another slow start in the first period of Saturday night’s contest, but unlike in its season opener against Army, they were forced to pay for it. Brock drew first blood at the 1:18 mark of the game and a little over five minutes later added a second tally on the power play to take a 2-0 lead. The Badgers’ second goal seemed to have woken up the Raiders, and from then on they played with urgency, attempting to over­come the early adversity. The visiting defense, however, stood strong and Brock held a 2-0 lead after 20 minutes of play.

It did not take much longer for Colgate to get on the scoreboard. however. After Badgers’ Adam Schwark was called for a two-minute interference penalty, the Raiders made them pay by capital­izing on the power play. Senior assistant captain François Brisebois was credited with the goal, assisted by senior captain Brian Day and sopho­more defenseman Nathan Sinz at the 5:32 mark.

While ‘Gate continued to keep the puck in the visiting zone, it would take until the wan­ing minutes of the second period for the hosts to make the game even. McCann put the biscuit in the basket after receiving a pass from sopho­more forward Billy Rivellini at 17:05. Junior defenseman Corbin McPherson was credited with the second assist.

The third frame saw the referees almost lose control of the tilt. Colgate suffered from contro­versial calls made by the officials who sent Raider skaters to the penalty box six times throughout the period. This includes a sequence of 12 min­utes at the start of the period, in which ‘Gate only saw a little under two minutes of even, five-on-five play. It was during that brief period that McNamara scored his game-winner assisted by sophomore forward Christian Long. Before finalizing the game and earning the victory, the Raiders would have to kill one more penalty that was called at the 18:31 mark. Colgate neutral­ized the Badger power play and obtained the hard-fought victory when the buzzer sounded.

“We weren’t playing our game in the first pe­riod,” McNamara said. “In the last two periods, we made sure to get back to making simple plays and finishing our checks. Good things tend to happen when we do the little things right.”

Next up for the Raiders is a return to NCAA play after a 14-hour road trip to Sault Ste. Marie, MI where they will take on the Lake Superior State University Lakers in a two-game series this upcoming weekend.

“We will keep the practices up-tempo in preparation for the long road trip,” McNamara said. “I’m also sure that we’ll continue to work on perfecting our special teams play.”