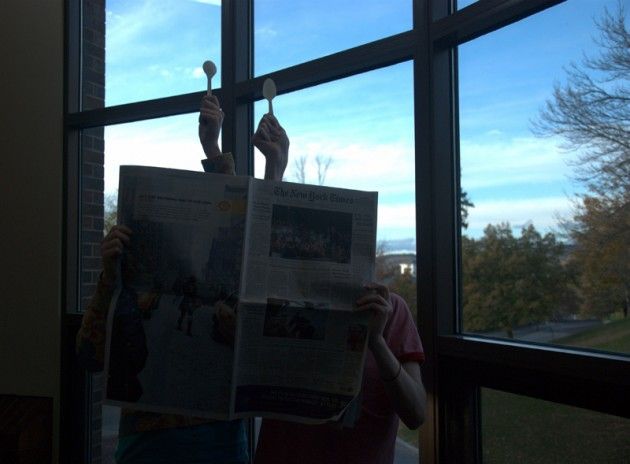 This past week, large quantities of spoons disappeared from the Coop and an unusual amount of eye patches were spotted around campus. These two signs point to only one thing: the game of Spoon Assassins has returned to Colgate.

The current game is the brainchild of seniors Brenda Boyle and Eugene Riordan, founders of BE Productions. Boyle and Riordan came up with the premise of BE productions while abroad together on the Colgate Study Group to Geneva, Switzerland last spring.

“We are both so busy with our senior proj­ects and theses and running a million clubs and we just wanted a way to have fun and let other people have fun. People should be hav­ing fun and playing games. Everyone needs an outlet here,” Riordan said.

The game of Spoon Assassins has been played at Colgate previously, but the um­pires, the directors of the game who make all the final judgment calls, had graduated when Boyle and Riordan returned to campus from Geneva. Consequently, the two fun-seeking seniors took it upon themselves to re-estab­lish the tradition, starting up the game again last Wednesday, October 13. An unprec­edented 170 students, staff members and faculty signed up to play, after hearing about the game through word of mouth, from the BE Productions coop table or from the Face­book group. There was a $2 registration fee, which will be used as the prize money for the winners when the game is completed.

The premise of the game is that each par­ticipant is assigned a “target” to assassinate by means of a spoon. If one person assassinates his or her target, the target is out of the game and his or her victim becomes the next victim of the assassin. In that way, the game keeps go­ing on and on until only one assassin is left standing. Potentially, the game could go on for weeks. However, if the game slows down, the Umpires have the option of calling a sudden-death period. This period will be for a certain number of days and if, at the end of the allot­ted amount of time, a player has not made a kill, he or she is eliminated from the game.

There are certain rules and regulations that all participants must follow, as established by the Umpires, Boyle and Riordan. For ex­ample, there can be no “projectile spooning” (throwing of spoons) and spoons cannot be longer than 12 inches. Additionally, there are “immunities” posted for every day of play, which if participants follow, they cannot be killed on that certain date. These immuni­ties are things like wearing an eye patch or attaching a sign stating “Spoon now, Fork later” to one’s person. At the conclusion of the game, there will be three prizes awarded to the players. One for the “Last Man Stand­ing,” the last assassin to be left alive; one for the “Hunter,” the player who assassinated the most people; and one for “Most Bad-Ass Kill,” which is determined by “difficulty, pre­paredness, trickery, stealth, combat, style, ex­ecution, audience and general awesomeness.”

Participants have learned that this is a game to be played with cunning and finesse.

“I think people underestimate how much they can do on this campus. We’re just two seniors that have access to printers. This isn’t an SGA official club, just us doing stuff, hav­ing fun … And what other event on campus besides Dancefest gets 170 participants?” Riordan and Boyle said.