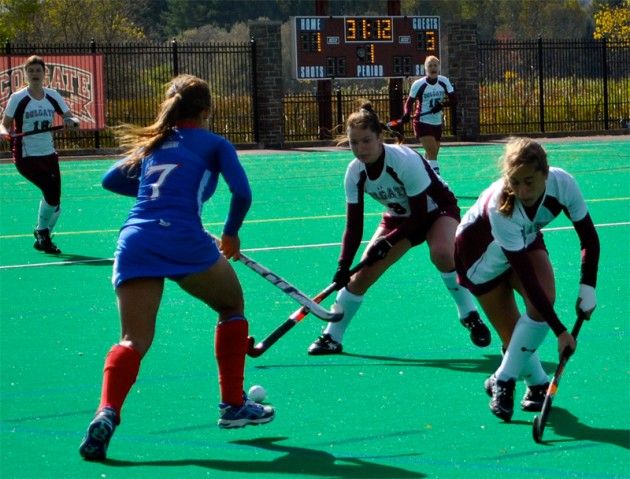 On Saturday, the Colgate field hockey team fell to No. 9 American University, 6-1. With this loss, the team’s record for the season stands at 4-10. The Raiders are 1-2 in Patriot League play, while American is 12-2 overall and 3-0 against Patriot League opponents.

Senior Laura Denenga recorded Colgate’s lone goal of the day, off an assist by sophomore Kendall Zaharris. The Eagles received three of their goals from senior Christine Fingerhuth.

The scoring began ten minutes into the game with the first of the Eagles’ goals. With 13 minutes left in the half, Colgate tied up the score with the goal from Denenga. Zahar­ris tipped the ball from the circle and then Denenga took it to the net, beating the Ea­gles’ goalie for the score. Soon after, American snatched back the lead with the first of Finger­huth’s goals. American netted another goal just two minutes before the end of the half, raising the score to 3-1.

“We stayed with them pretty well at first, but we made some mistakes down the line that cost us goals,” Lalli said. “They’re ranked number nine in the nation for a reason, so while our effort was apparent throughout the game, we couldn’t afford to make the mistakes that we did make.”

The second half was characterized by Fin­gerhuth’s second and third goals, which came within three minutes of each other. American’s final tally came 13 minutes before the game’s conclusion, ending the game 6-1.

In the match, Colgate was outshot 21-4. American also had the advantage in pen­alty corners, besting Colgate 7-1. In goal, senior captain Kirsten Lalli saved 14, mark­ing her sixth game of the season tallying a double-digit save total.

“Overall, there were a lot of positives in the game, especially in the first half,” Head Coach Cathy Foto said. “It was a good team effort.”

Lalli was positive about the team’s progress throughout the season.

“We’ve definitely improved as a team in terms of our ability to fight during each play and to be more aggressive overall,” Lalli com­mented. “If we continue to play the way we have been in the last couple of games we should be able to finish with more wins and make the playoffs.”

The team will play again this Saturday when they host Holy Cross at Tyler’s Field on Colgate’s Senior Day. Holy Cross is currently 0-14 overall and 0-3 in Patriot League play.