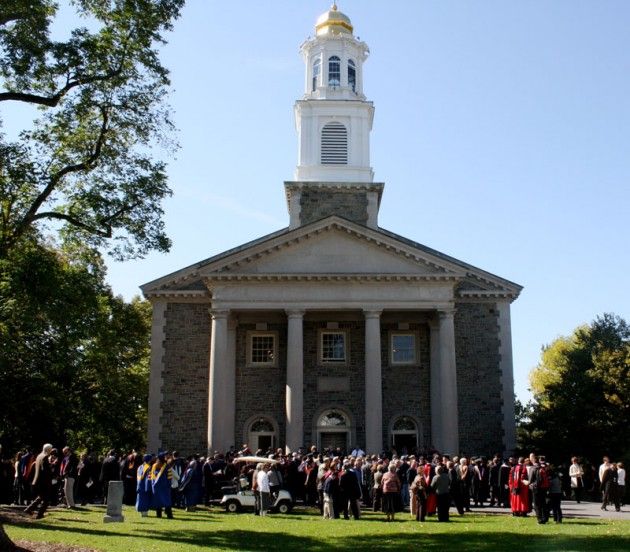 October 3, 2010 marked the inauguration concert of Colgate’s sixteenth President, Jeffrey Herbst. The concert was performed by Colgate’s own University Orchestra with Conductor of the University Orchestra and Professor of Music Marietta Cheng. Hamilton residents, Colgate students and even some non-Hamilton residents gathered at the chapel to witness the exciting performance.

Arleen Heck of Sherburne, New York traveled about 13 miles to support her good friend Anita Humer, who is the pianist for the Colgate University Orchestra.

“I’ve been coming to these events for years now. I think it’s fantastic because I love these types of afternoons. It’s just a shame that it isn’t more publicized so more people could enjoy it,” Humer said.

But, more surprising, Anne Altshuler of Oxford, New York, made a 35 mile trek to Hamilton just to hear the afternoon’s performance.

“I think it’s amazing music and the chapel is such a wonderful acoustical space. I deeply appreciate the opportunity to enjoy great music,” Altshuler said.

The performance began promptly at 2:30 p.m. with Mozart’s “Overture to the Marriage of Figaro,” a light and elegant piece based on an opera composed in 1786. The overture’s opening captured the feel of the whole performance.

Next on the orchestra’s repertoire was Jean Siberlius’s “Karelia Suite.” Just as Siberlius aimed to preserve Finnish tendencies in music, the orchestra’s performance of “Karelia Suite” maintained just that. The third piece of the afternoon was “Rhapsody on a Theme of Paganini” featuring Steve Heyman, Colgate’s pianist-in-residence, as soloist. Though the work is rather long, Sergei Rachmaninov’s 24 variation composition does not fail to dazzle.

After the Rhapsody came a twelve-minute intermission, which gave the orchestra a much deserved break. Despite any nerves that orchestra members may have been feeling during the inaugural performance, the musicians managed to dazzle audiences with a fantastic show.

“We have wonderful artists. They’re such quality performers and the music is beautiful,” Professor of Physics and Astronomy Enrique Galvez said.

At the end of the intermission, Cheng reclaimed the stage and was greeted by a wave of applause. Waving her baton, the orchestra began to play Felix Mendelssohn’s “Overture to Ruy Blas.” This overture was composed in only three days.

The last work of the concert was Igor Stravinsky’s “Firebird Suite,” a musical roller coaster ride packed into six movements.

At the end of the performance, Cheng offered insight into how the songs related to the inauguration of President Jeffrey Herbst.

“An inauguration is celebratory and festive. These works give off that vibe, especially in the beginning. They really fit the occasion quite well,” Cheng explained.

Additionally, Cheng said she chose works that allowed for a balance of challenge and interest. Indeed, the pieces sounded very interesting and challenging, and it’s hard to believe that the orchestra only had one month to prepare for everything.

“All the musicians are so talented. But then again, even the students come to me with so many years of experience. They’re already masters of their crafts,” Cheng concluded.